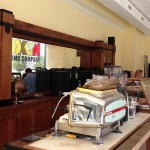 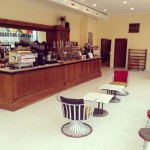 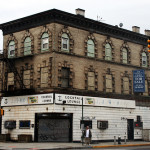 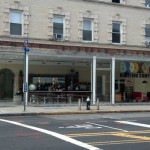 Two-year-old Brooklyn Roasting Company has opened its second retail location, in a space fondly remembered by many New Yorkers as the last truly gritty, seedy and potentially dangerous dive bar.

Replacing the “Members Only” sign and stained white facade of the Navy Yard Cocktail Lounge, the new corner space at 200 Flushing Ave. is now illuminated by natural light through floor-to-ceiling glass. According to a Gothamist report, the Brooklyn team did leave in tact some of the building’s historic touches:

Marble used for the counters and bar was discovered behind drywall in the back room, and the smaller coffee tables are supported by old industrial coffee fly wheel bases. Theatrical dressing room lights evoke the strippers’ former backstage area in the basement, and the bar’s linoleum was stripped away to reveal the original antique hextile floors.

The infamously shady Navy Yard Cocktail Lounge left the space three years ago, as the building was being sold. Those who dared to enter told stories of longshoremen spraying strippers with water guns, $3 cocktails without ice and other charms of a mostly bygone bar era.