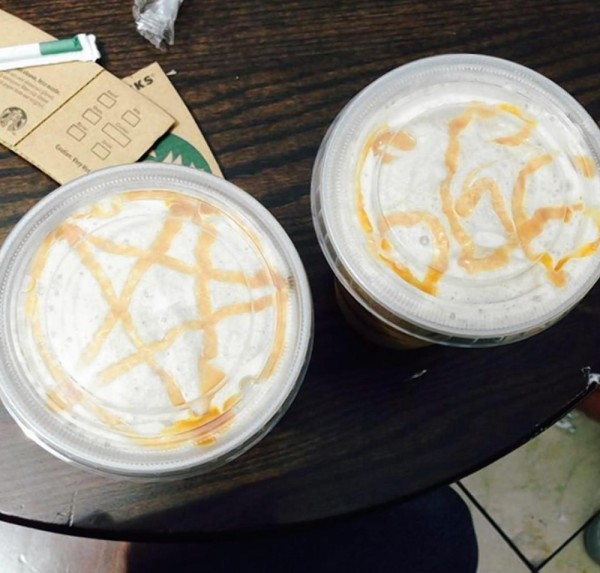 You would think this would go without saying in any kind of barista training, but don’t leave the mark of the devil in customers’ drinks.

Starbucks is now apologizing to a Louisiana woman who was served what appears to be two Starbucks whipped cream-topped Frappuccinos with Satanic symbols written in ooey gooey delicious caramel. In a picture she posted to Facebook, one Frap clearly has a pentagram, while the other has “666.” The drinks were served at the Baton Rouge Mall of Louisiana Starbucks kiosk.

“This is how my coffee was served to me,” the woman wrote to Starbucks. “I unfortunately can’t give the young man’s name who served it because I was so appalled that I could not bring myself to look at him. The star is almost ok because it is in your Starbucks logo, the 666, however was quite offensive.”

For the record, there are no pentagrams in the current Starbucks logo or any of its predecessors, but a pentagram is probably not “almost ok” nonetheless.

She continued, “I am in no way judging his beliefs or dis-meriting his beautiful artwork. I am, however, judging his lack of professionalism and respect for others. I am a teacher in the public school system and if I were to present a child of atheist or pagan believers with a Christian art project I could be sued in a heartbeat. I am of Catholic faith and would love to share in my beliefs daily. Fortunately I have enough common sense to present myself with professionalism and follow an ethics code. Perhaps that could be suggested to that particular location.”

For its part, Starbucks issued the following statement to the inquiring press:

“We are taking this customer’s complaint seriously and we have sincerely apologized for her experience. This obviously is not the type of experience we want to provide any of our customers, and is not representative of the customer service our partners provide to millions of customers every day.”