The commodity coffee market continued to be volatile in August, while rising arabica prices caused the composite price of all coffees to reach its highest level since May, according to the latest statistics from the International Coffee Organization. 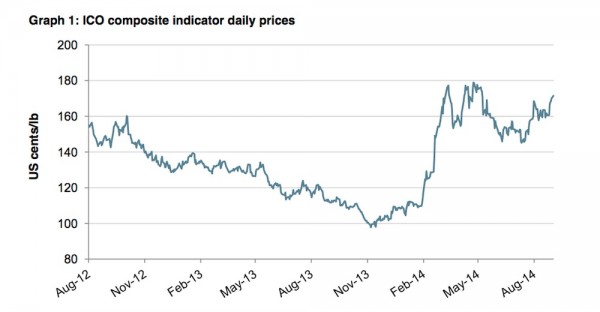 The ICO composite indicator price from August 2012 through August 2014. Graphic by the ICO.

(related: A Look Ahead to the ICO’s 4th Annual Financing Forum in London)

The Spring and Summer months of 2014 have thus far been characterized by higher-than-normal volatility due to market forces and speculation, particularly relating to the ongoing uncertainly surrounding the current harvest in Brazil. Brazilian naturals saw the highest increase in August, jumping 11 percent on the monthly average in the New York and London markets to $1.83.3 per pound.

“A revised estimate from Conab is expected in September, which should give a clearer picture of the situation, although there are increasing reports that the 2015/16 crop will also be affected by the drought that occurred at the beginning of this year,” the ICO reported.

Despite an unexpected down crop in Brazil, exports from from the world’s largest coffee producer continue to be consistently higher than they have been over the same period (April-August) in the past two years, further suggesting that global supply will be strained in 2015 as exports from other of the world’s growing regions struggle to fill the gap.