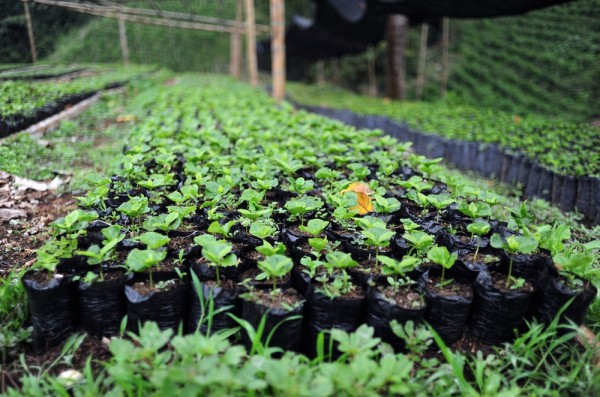 In this recent article in The Coffee Review, Ken Davids explores the idea of “the variety play,” which he defines as “marketing coffee by the botanical variety of the tree that produced the coffee.” In his review of a range of single-variety offerings from specialty roasters, he introduces another idea: varietal tiers.

In Ken’s estimation, coffee varieties can be divided into three tiers on the basis of cup quality, writing, “If the Geshas and Pacamaras and Bourbons and SL28’s constitute the top tier of varietal complexity and distinction and the more traditional varieties like Typica, Caturra, Pacas, etc. make up the middle tier, perhaps the Robusta crosses might form a third and lowest tier.”

He provides additional analysis of the second and third tiers that have unique relevance to the ongoing exploration of leading Colombian varieties, being led by Catholic Relief Services, the Center for Tropical Agriculture (CIAT) and World Coffee Research.

Ken writes: “Traditional Latin American varieties (Typica, Caturra, Pacas, Villa Sarchi, Catuai) tend to produce a solid but conventional-tasting cup that may impress but does not stand out. It is doubtless for this reason that most farmers and millers do not make a special effort to segregate these varieties and market them separately.”

Of his own suggestion that hybrid varieties with Robusta genetics might constitute a third tier of varietal quality, he acknowledges: “that is pure assumption at this point. In my limited experience it is very difficult to consistently distinguish Caturra from the suspect Castillo in a rigorous blind cupping.” Ken wrote that line before he participated in the CRS Colombian Varietal Cupping—an experience that only served to reinforce his idea that Caturra and Castillo are as often as not indistinguishable on the cupping table.

The Future of Caturra

Taken together with the preliminary results of our sensory analysis of Colombian coffee varieties, Ken’s assessments may have real, and troubling, implications for the future of Caturra.

Over the past month, I have published conversations with three renowned cuppers with three very different perspectives on the sensory attributes of Castillo and Caturra. To the extent those perspectives represent broader currents in the marketplace, they have different implications for Caturra — none of them particularly encouraging.

Last week, I asked Geoff Watts of Intelligentsia Coffee about his pronounced preference for Castillo in blind, side-by-side cuppings with Caturra. Geoff was careful to note that while the results opened his eyes to the quality potential of Castillo, he will not rewrite his buying protocols on the basis of a single cupping panel. But if large numbers of specialty roasters were to share the preferences Geoff expressed during that panel, it would be hard to see an encouraging future for Caturra, which has lower yields and less disease resistance than Castillo while frequently being judged inferior in terms of cup quality. Under this scenario, few growers would likely be compelled to plant Caturra instead of Castillo, since it would mean exposure to production risk combined with a deficit in the area of cup quality.

Two weeks ago, I published this conversation with Tim Wendelboe, who summed up his agnosticism on the Castillo v. Caturra question this way: “Sometimes Castillo will taste better than Caturra from the same farm and sometimes the opposite. I think both cultivars can be really delicious.” He further noted of Caturra, that “when it is better, it is not that much better.”

(related: The Nordic Approach to Coffee Processing (with video)

This observation is distinct from Ken Davids’ suggestion that Castillo and Caturra may be indistinguishable in the cup. But it is similar, as it suggests that the two varieties are equally likely to produce a higher-quality cup profile and neither is intrinsically better than the other. Under this scenario, as well, it seems that there is little incentive for growers to plant Caturra, since it would expose them to production risk with no decisive promise of reward in the marketplace on the basis of quality than Castillo.

Three weeks ago, Tim Hill of Counter Culture reported in this interview on his decisive preference for Caturra on the cupping table. He suggested that Caturra is worth 50-60 cents per pound more than Castillo based on its consistently superior quality. This is the only scenario in which the continued production of Caturra seems to be even a remote possibility. But Tim isn’t sure that even a 60-cent-per-pound premium will be enough of an incentive for Colombia’s growers to resist the steady march toward Castillo. The math is not encouraging for Caturra.

For the sake of discussion, let’s assume that between its high yields and its robust resistance to disease, Castillo offers a grower an average 25 percent more production than Caturra. To compensate for that production deficit, growers of Caturra would need to be assured of a 33 percent premium. In a $2 market, that means a 60-cent premium. In other words, the quality premium that Tim proposes is not a quality premium at all — it is a risk premium. And it only covers Caturra growers for production deficits up to 25 percent — it offers no protection for the kinds of catastrophic losses that have affected coffee growers from Colombia to Central America every year since 2008.

If even the most optimistic scenario for Caturra — the one in which the variety offers a decisive quality advantage over Castillo and a 60-cent-per-pound premium — is heavy with risk and light on reward, it is hard to generate a lot of enthusiasm for Caturra’s future in a time of climate change and coffee leaf rust. For farmers who are growing Caturra today, it is not clear that there is a strong case for them to be growing Caturra tomorrow. Castillo seems to offer the promise of more protection against production risk without a significant reduction in market reward. Growers who seek to increase their incomes on the basis of cup quality may be wise to consider moving toward the “top tier” varieties identified by Ken Davids, which may entail as much risk as Caturra but are more likely to generate significant premiums.