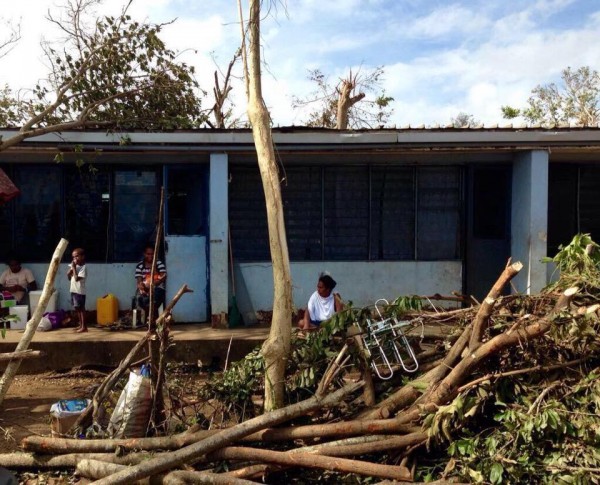 After the storm in Vanuatu. Facebook photo by Coffee Brothers.

The full extent of the damage to the coffee industry in Vanuatu may not be known for months, even years, but aid is unquestionably needed now.

Winds of 300-plus miles per hour devastated much of the South Pacific island nation Friday and Saturday, while today there are reports of limited food, water, shelter and electricity. Additional reports say the death toll is anywhere from at least four people to at least 24.

The island of Tanna was hit hardest by the cyclone, and it is also the center of the nation’s growing coffee industry. Coffee is Tanna’s largest export crop, and thanks to relationships with buyers and importers, mostly from Australia and New Zealand, the island had been forecast to have a record-high crop this year, by a wide margin.

We recently profiled New Zealander Mike Pole, who has been helping build the island’s coffee infrastructure through the development of the INIK Cooperative and the the Tanna Island Coffee Project. Pole has been updating the world on the post-storm developments on Tanna through the group’s Facebook page, and he recently told ABC rural that more than half of the island’s coffee crop is estimated to have been destroyed. Here’s more from that ABC report:

There are an estimated 180 hectares to 240 hectares of land under coffee on the island.

“There’d be probably 600 to 900 growers, if not more, but again, these people are subsistence-livers, so they share their labour around quite freely,” Mr Pole said.

Mr Pole hoped that at least 30 to 40 per cent of the crop could still be harvested.

“But I’ve never been or seen some place that’s gone through 300 kilometres per hour wind for a sustained period, so I’ve got no idea,” he said.

To help the delivery of immediate aid, Sydney-based roaster and retailer Coffee Brothers — which exclusively sells Tanna Island coffees that come from their direct relationships — has established a site with links to numerous organizations working on the ground. The Tanna Coffee Fundraiser points to the Red Cross, Oxfam and the Jumpstart Foundation, all of whom are currently providing or facilitating direct response.

We will continue to provide updates as this tragic story develops.

It makes a sad reading to know about massive destruction caused by tropical cyclone on 14 March 2015 at Vanuatu. The world -community is required to come to the aid of affected people there as best as possible. This Vedic astrology writer had, as early as on 2 June 2014, predicted in astrologyweekly.com in article – Stressful times ahead for world economy in 2015 and 2016 – that countries or regions whose name begins with letter “V” , besides some other, could likely be hit by sea tsunamis after October 2014 in 2015. It seems the prediction , though in the public domain , did not come to the notice of concerned people for taking effective advance remedial measures. A total lunar eclipse is again occurring on 28 September 2015 calling for advance preparedness though there does not seem to be a cause for big alarm. It may be added that such cosmos influences begin to affect some days before and continue to affect some days after the eclipse.