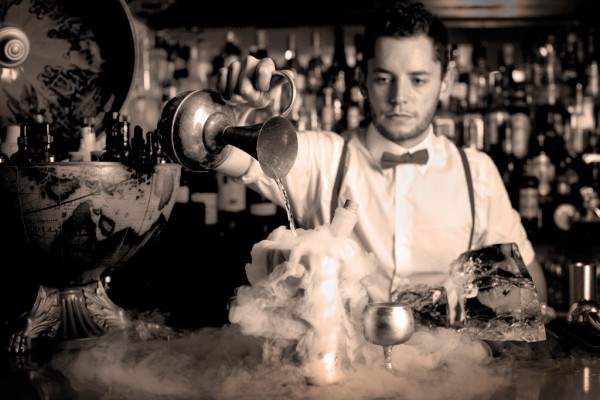 Molecular Mixology. Modern bartending. Craft cocktailery. However you want to file these things, Tristan Stephenson is at the forefront of all of them. He’s worked with star chef Jaime Oliver, opened bars at the Ritz, opened numerous bars of his own, and launched his own drinks business consultancy, Fluid Movement. He even ran a popup gin bar at the birthday of Charles Tanqueray (yes, that Tanqueray).

Unlike some others in the field, Stephenson recognizes coffee as a valuable component in a bar’s drink portfolio. He finished third in the 2009 UK Barista Championship after training with Origin Coffee in Cornwall, where he now makes his home.

Bulked up by some incredible food and location photography by Addie Chinn, Curious Barista covers a lot of ground, including coffee’s earliest origins, some basics on harvesting and processing, science as it applies to coffee flavor, home and commercial roasting principles, and a full 10 pages on grinding, among other topics. Much of the book’s back end also reads a bit like a cookbook, as Stephenson shares his recipes for various brewing methods, as well as recipes for more creative coffee-based drinks and desserts. 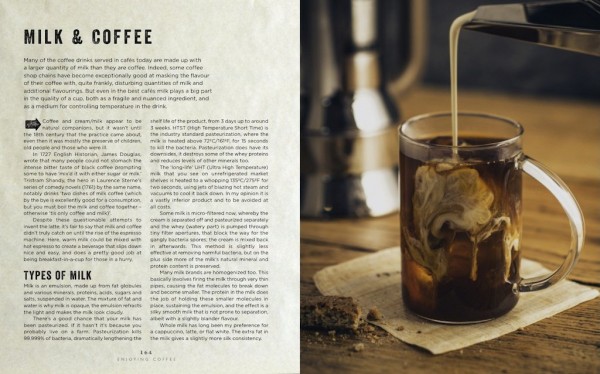 Inside “The Curious Barista’s Guide to Coffee.” Photo by Addie Chinn.

We reached out to Stephenson just prior to the book’s launch to discuss its impetus, his personal interest in coffee and the intersection of craft coffee and cocktails:

What was your first experience with coffee?

I have worked in restaurants since I was 16, so coffee was pretty much unavoidable, both as a culinary field and as an essential pick-me-up. But even before that, I have always enjoyed coffee. From an early age, I was sometimes treated to instant coffee milkshakes.

For how long working on the book?

I was actively researching and writing for just over 18 months, and during that time I also wrote my whisky book. Having the two projects on the go at the same time helped to keep things in perspective and effectively minimized the scourge of writers block. Naturally, there is some stuff in the coffee book that has been bouncing around my head for years though.”

The title suggests the book is for baristas, although preparation and service are just a small part. Can you explain the breadth of context?

I’m not sure that it’s essential for a barista to know all this stuff to do their job well, but I do think that the job can be more rewarding when you have an eye on the broader picture. It’s certainly been that mentality that has driven my own thirst for knowledge.

Do you roast coffee?

Yes! I’ve owned a succession of home coffee roasters, starting with a 250g Gene Cafe that I bought about 10 years ago. I’m currently roasting on a Hottop at home. Besides that, I have spent a fair bit of time in roasteries large and small, and I try to keep up to date with print and online publications.

For whatever reason, the coffee and cocktail worlds can be quite isolated from one another despite obvious similarities? Having spent significant time in both, what’s your perception?

I agree. I guess it’s like anything, really: Everyone is caught up in their own world where things can become a little insular. Sadly, a good deal of bartenders view coffee — espresso — as an inconvenience, but that is beginning to change. On the other side, I know plenty of baristas with a keen interest in cocktails, and it’s fascinating to see the unique perspective that a background in brewing coffee gives them. The two worlds are certainly beginning to mix more.

How would you compare the growth patterns of craft coffee and modern mixology?

From where I stand, the development of the ‘craft cocktail’ scene and ‘craft cafe’ have gone more or less hand in hand. I remember Penny University (from Square Mile) opening in London back in 2009, the same month as my first cocktail bar, Purl. Back then, there were no more than a dozen great cafes in London and probably 20 really good cocktail bars. Today, the brew bar has spread around the world, literally in every major city, many of them trying there hand a roasting, too. Similarly, it’s now possible to get a great (alcoholic) drink in most towns. I think that both industries have competitive events, social media and journalism to thank for the dissemination of knowledge, but obviously there has to be consumer demand, too. That has been a natural evolution of the provenance, organic, local, slow, crafted themes of the past couple decades.

In general, restaurant coffee has been sharply criticized in the past few years, rightly or not. From today, how do you see it evolving?

Whether you like it or not, coffee is secondary to food in the restaurant environment. Wine is secondary to food, as well. While some people might argue with that statement, if you think about it, it’s true. But that doesn’t mean coffee and wine need to be second in quality. The problem lies in installing a sustainable coffee program with the personnel to manage it. Sustainable is the key word there, and attempting to run a top quality coffee offering can potentially cause cash and staff headaches for a venues whose main focus is actually good food. I believe that the solution is for restaurants to look beyond espresso to more consistent, simple, and suitable brewing methods to augment their food offering.