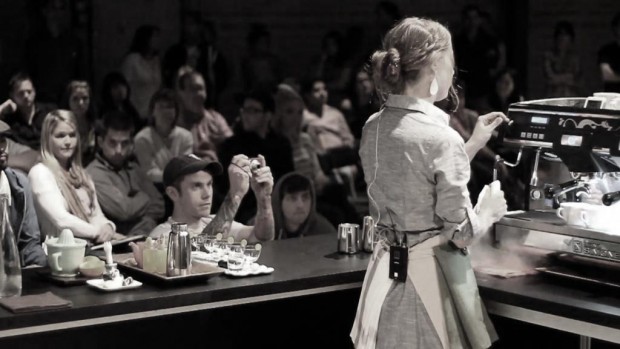 Regional barista competition photo by the Barista Guild of America.

The Specialty Coffee Association is discontinuing regional barista competitions, as it refines the United States Coffee Championships platform to drive coffee professionals to its membership organizations.

According to a press announcement that has not yet been widely released but has been confirmed accurate by an SCAA representative, the changes will begin with the current, 2016 competition cycle, bringing an end to 13 years of sanctioned regional barista competitions.

The 2016 United States Barista Championship competition, which will be held in conjunction with the SCAA Event in Atlanta next April, will include 50 competitors in total. According to the SCAA’s release, 35 of those competition spots will be given to people who hold a Level 1 or Level 2 SCAA barista certificate or have previously competed in regional competitions on a first come, first serve basis. Twelve spots will be given, also on a first come, first serve basis, to anyone interested in competing. Three remaining spots will be given to SCAA scholarship participants. The SCAA promises more information on that program later this year.

The SCAA transitioned the program to three larger regional competitions in 2013 — the Big Central, Big Eastern and Big Western — involving 30 to 40 competitors for each, with finalists moving on to the national competition.

Here is the SCAA’s release in full:

Santa Ana, Calif. (June XX, 2015) — The Specialty Coffee Association of America (SCAA), the organization who produces the United States Coffee Championships, has announced changes to the prequalification system for the United States Barista Championship (USBC). Competitors will be able to register to compete at the USBC, beginning in the 2016 cycle, as follows:

In the last 5 years, barista-focused regional activity has increased dramatically. Barista Camp, an education focused event, was introduced in 2010 and has expanded by 400%. BGA Member Driven Events, community networking events, were launched in 2013 and just in the last year, we had over 150 MDE’s around the country. Currently, the SCAA is working closely with the Barista Guild of America Executive Council to identify new community event models that would further grow opportunities for members to learn, network and engage. “While it is not easy to see the competitions change, the Barista Guild Executive Council acknowledges the need to ensure we are fulfilling the Barista Guild Mission and Vision with each event.” Stated BGA Chair Lorenzo Perkins. “In light of these changes, we have been working closely with the SCAA to be responsive to the needs of Barista Guild members to ensure that we enhance the value of all events for members. By transitioning away from the current regional barista competition structure, competitions will become more sustainable for the long-term, and valuable resources will be freed up to create new and exciting opportunities to engage our BGA membership. The Barista Guild looks forward to a strong field of competitors at the US Coffee Championships next year in Atlanta and supporting our membership through expanded Barista Camp opportunities, Member-Driven Events, and new opportunities to bring together and strengthen the barista community.” The cessation of regional competitions in no way represents an end to regionally focused barista events – rather a refocus on how best to allocate association funds to best serve the barista community.

“The BGA has been so active in creating more inclusive events such as BGA Camps and I have loved seeing how many people they have been able to reach and the enthusiasm that has come from those events” said Heather Perry, SCAA 2nd Vice President and 2x USBC Champion. “I can’t wait to see what the BGA envisions for these additional resources and the opportunity to reach an even larger community of baristas.”

For many competitors, this new system will also reduce the costs of competing by eliminating the expense associated with the requirement to compete at a regional event; by removing the regional requirement, most competitors can expect to see a less expensive path to the USBC.
It was important to ensure that there was still a system for competitors to attend an informational, competition-like event to practice their routines and learn about the competition system. To address this need, the SCAA is working with the BGA to develop a prep fest model that will be member-driven and will follow a event structure similar to regional competitions.  More information on prep fests will be available later in 2015.

About SCAA
The Specialty Coffee Association of America (SCAA), is a non-profit trade organization and the world recognized leader in coffee knowledge development. With over 12,000 members located in more than 40 countries, including member companies and their employees, SCAA members represent every segment of the specialty coffee industry, including producers, roasters, importers/exporters, retailers, manufacturers, baristas and other industry professionals. For over 30 years, the SCAA has been dedicated to creating a vibrant specialty coffee community, recognizing, developing and promoting specialty coffee by setting and maintaining quality standards for the industry; conducting research on coffee consumption, brewing and perfection of craft; and providing education, training, resources and business services for its members. Visit www.scaa.org.

This seems to be a good thing for those of us who have felt the options were too narrow to get to the big show. not that I would ever consider putting my baseball skills up against the more subtle wrist movements of the Barista. There are many ways to get to the “Bigs” and the most difficult are not necessarily the most egalitarian. The way you get the right level of skill is not important, just getting them is what counts. Then using them in public becomes the real test. The most important thing though is loving the game, respecting the competition, and playing to win. The moment you step up to the plate in my game, there is a stillness. Just you , the tools of your trade and trust, the kind of trust that allows your your autopilot to do the work for you as if to say, “watch me”, I am going to knock this sucker outa here. If you know what I mean, then there is no difference whether you are playing baseball or playing Barista. The crowd is silent and it is just you and your work.