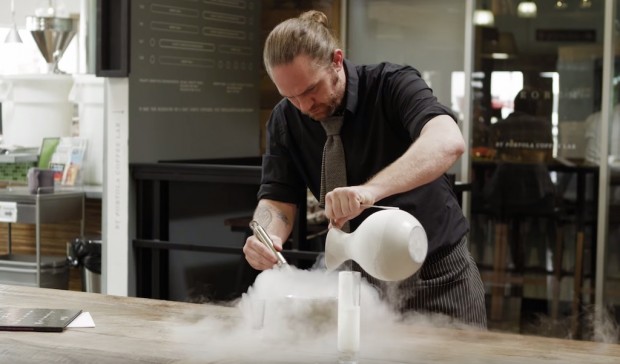 Screenshot from the “Barista” trailer.

With backing from Los Angeles-based Samuel Goldwyn Films, the feature-length documentary film “Barista” will be making an official debut on select silver screens, on iTunes and on-demand on Nov. 6.

The film company — which over the past 14 years has backed dozens of well-received and widely released indie flicks, including “Super Size Me,” “Bloodworth” and “Robot & Frank” — released the official trailer for “Barista” on Friday, featuring a compelling soundtrack that underscores the intensity of barista competitions, as well as numerous familiar faces in the coffee competition circuit.

Written and directed by Rock Baijnauth, the film originally titled “Drip” received nearly $53,000 in crowd-funded backing through Kickstarter. On the “Drip” campaign page, Baijnauth said the movie’s title was changed to ensure potential viewers would have a clearer understanding of the film’s focus. In this case, the focus is largely on the run-up to the 2013 U.S. Barista Championship in Boston. The documentary follows some well-known baristas including Charlie Habegger, Charles Babinski, Eden-Marie Abramowicz, Ryan Redden and Truman Severson.

Following in the footsteps of other recent documentaries such “Somm” and “Jiro Dreams of Sushi,” “Barista” promises to take viewers behind the scenes of one of the specialty food world’s most consumed yet least understood products. Incidentally, it may also prove to be a boon for the specialty coffee industry, expanding consumer interest and, in turn, advancing the very concept of professionalism in high-end coffee. It might even do more for real-life latte artists than the character of Kato did in “The Green Hornet.”

Here’s more from the source on what the film is all about:

BARISTA takes the viewer on a humorous, emotional and enlightening look into the unimaginable world of coffee competitions and the passionate, lovable and quirky characters who devote their lives to them.
If you think you know coffee – this film will make you think twice. These baristas take this universally beloved beverage seriously. Their passion for it can be felt through every frame of the film. BARISTA will take you beyond the drink and shine a light on a unique world very few of us ever knew existed.

And without further ado, the trailer:

Given how notoriously bad coffee movies have been, and given how unfilmable the profession often tends to be, it might succeed by taking more of a “King of Kong” approach.