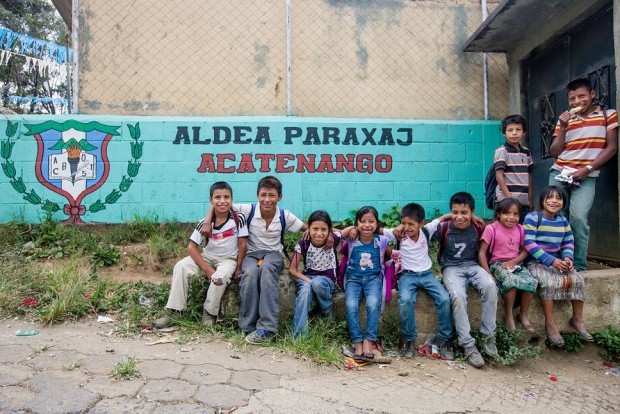 Children at a school in Acatenango, Guatemala. Photo courtesy of Good Neighbors.

The U.S. branch of the global nonprofit Good Neighbors is in the homestretch of a fundraising drive that will allow for new water filtration systems in schools in the coffee-growing community Acatenango, Guatemala, near Antigua.

This is the second year the group has raised funds under the Coffee Meets Water (#CoffeeMeetsWater) campaign banner to help provide clean water in coffee regions. Last year, the group raised nearly $10,000 to build and repair water wells in the Sidama region of Ethiopia. It was during that project that the development organization discovered a symbiotic relationship with the coffee community, finding that most of the people benefiting from the water projects were coffee farmworkers, and quickly finding support from numerous U.S. West Coast coffee companies for the project.

This year, many of those same companies have returned to pledge support in the form of perks for pledges, direct monetary contributions, and even help with the project development on the ground. Coffee organizations backing the Coffee Meets Water effort include the Los Angeles Coffee Club, Groundwork Coffee, Equator Coffees & Teas, Portola Coffee Lab, Demitasse and Copa Vida.

“We realized what a conundrum it was that these people working on coffee farms to create this amazing coffee for the whole world to enjoy didn’t have access to clean water themselves,” Good Neighbors’ Nellie Kim told Daily Coffee News regarding the inception of Coffee Meets Water. “And we found all these amazing coffee companies were really quick to join in. All the partners have been incredible in getting on board, and mobilizing their own bases. They are our ambassadors, in a way.”

The Guatemala project, which as of this writing had been fully funded with a modest $7,000 goal, will involve the installation of seven new water filtration systems for schools in the Acatenango region, with any additional funding beyond the goal going toward residential filtration systems, which Kim said run for approximately $60 per unit.

Having found funding success and developing relationships in the coffee industry through the campaign’s first two years, Kim said she hopes the coffee-region-focused initiative can become an annual one, with a focus on a new growing community each year. “I’ve already been talking with Eddy [Cola] from Groundwork about where this can maybe happen next year,” Kim said. “I think we’re onto something here.”

For more on the campaign, including instructions on how to make a donation even after the online fundraising period ends, visit the Coffee Meets Water Indiegogo page.