Coffee and Cocoa: The Twin Peaks of Shark Mountain Coffee 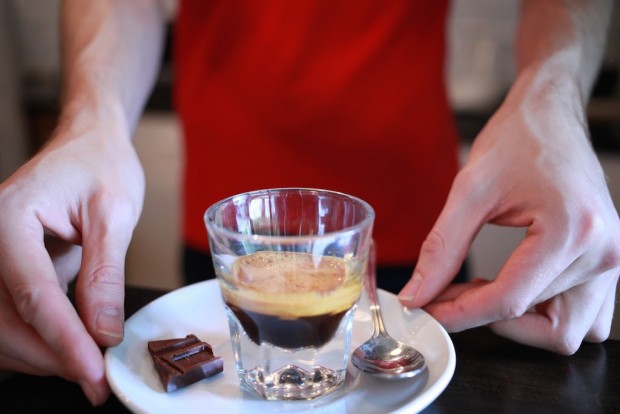 Chocolate and coffee have plenty in common. They’re both grown in the tropics, fermented during their processing phases, and roasted and ground before reaching their culinary conclusions. One would therefore assume that there’d be an equivalent degree of overlap in the sourcing and production of bean-to-bar chocolate and specialty coffee, and yet these two industries are actually quite distinct, even for a company that ventures to pursue them both.

Shark Mountain Coffee in Charlottesville, Va. has been roasting both coffee and chocolate from its inception in 2013. Coffee has always been the main attraction, but it just seemed to make sense to bring cocoa in-house in the same spirit of craft and quality as drives the coffee program.

A pet peeve of Shark Mountain owner and head roaster Jonny Nuckols is walking into coffee shops that are meticulous in their craft-focused approach to roasting or sourcing and brewing coffee, and finding complementary comestibles such as syrups and chocolates that are mass-produced elsewhere. Said Nuckols, “all this stuff you can get in any other shop.” 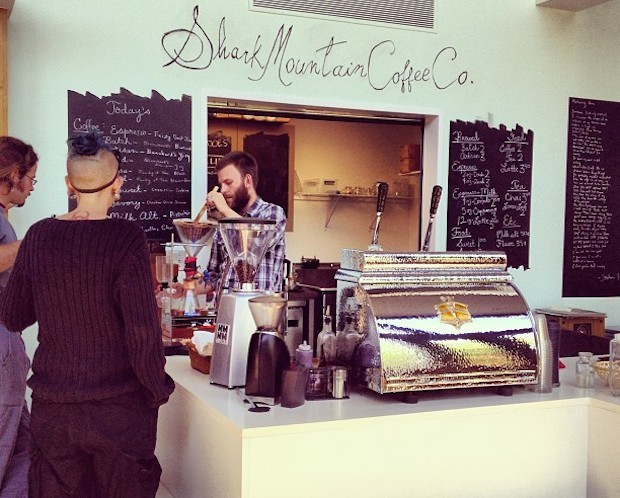 Nuckols sees importance in following through with providing customers a unique and discerning experience across the board. This means not serving an off-the-shelf product that could reasonably be made in-house. “I had the roaster, and learned through forums and websites how to roast cocoa, and then turned it into a sauce for mochas and hot chocolates,” said Nuckols. A few months later, out of equal parts curiosity, enjoyment, and the need for alternative streams of revenue, the cocoa craft was taken a few steps further into finished, single-origin bean-to-bar chocolate.

And yet apart from the occasional intra-beverage commingling of coffee and cocoa, these two fruits almost never cross paths. Nuckols said Shark Mountain roasts both “super light,” therefore there’s little if any residue remaining in the drum, although for good measure a dry burn is done between products and they’re roasted on different days.  They’re also sourced from different farms and shipped in different containers. 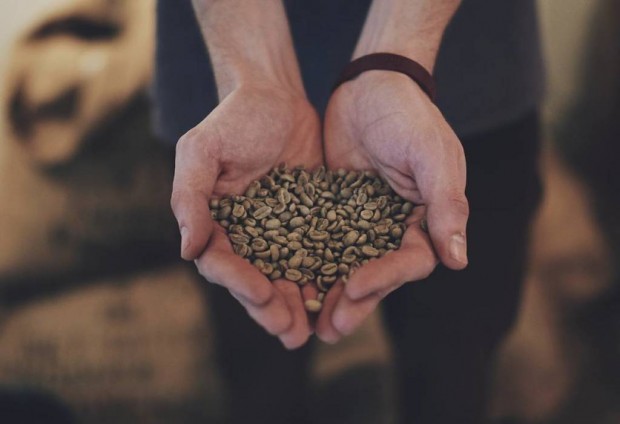 Nuckols imagines they probably pass through the same ports at some point, and though he knows there exist farms that grow both, and there are regions from which he has sourced both in a general sense — Tanzania, Haiti, and Peru, among others — it never comes from the same farms. This seems largely due to the fact that while the best coffee is grown at altitude, cocoa is typically down below.

And there are some origins that, despite a climate amenable to both, only seem to produce the one or the other. “I have yet to be able to source an Ethiopian cocoa. I don’t know whether that’s because of economic or political climates, or because it’s much easier, given its history, to get coffee, that no one really exports cocoa or whatever,” observed Nuckols. “In the same case, I’ve never seen an Ivory Coast coffee.” Nuckols has one direct-trade relationship with a coffee producer in Nicaragua, but depends on the assistance of importers for the rest of his coffees, and none of the coffee importers he works with also happens to import cocoa.

Beyond elevation and trade, there’s also a considerable difference in the attention paid to processing. “In general, the chocolate industry is about 10 or 15 years behind where coffee is now,” said Nuckols. “The way that cocoa is fermented is, across the board, akin to a naturally processed coffee, but it’s done in this ad-hoc way.” 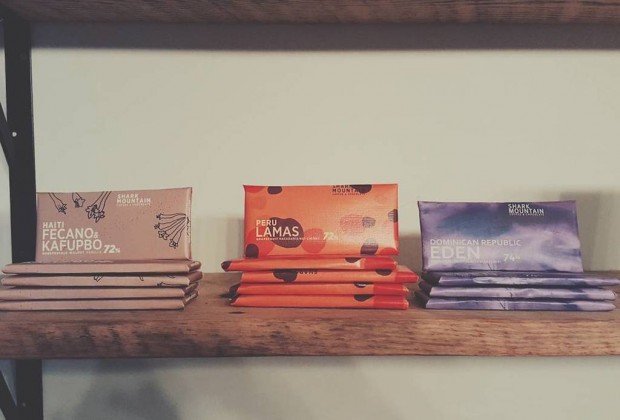 Nuckols described cocoa processing as a matter of unsorted seeds left to ferment in uneven piles without any agitation under a cover of banana leaves for a week to 10 days, then stored in burlap sacks usually without an inner lining. He likened it to how coffee processing was probably done before anyone realized the potential gains in quality that come from putting the time and labor into a careful, more even process for a cleaner, more consistent result.

The hope is that the bean-to-bar chocolate movement attracts more coffee-like appreciation and scrutiny of every action taken up and down the supply chain. “I have a hypothesis that once that starts to happen, and people start to really focus on quality fermentation in the chocolate world, then you’re going to start seeing super high percentage bars that aren’t bitter, that are smooth,” said Nuckols.

Nuckols believes that bitterness in cocoa might well be caused by the same factors that cause bitterness in coffee: Roasts taken too dark in an effort to mask defects that actually originate during the harvesting and processing stages. Yet when cocoa is done right, it exhibits a lot of the same nuance and flavor characteristics as coffee, and the notes aren’t nearly as subtle — they come screaming to the fore. 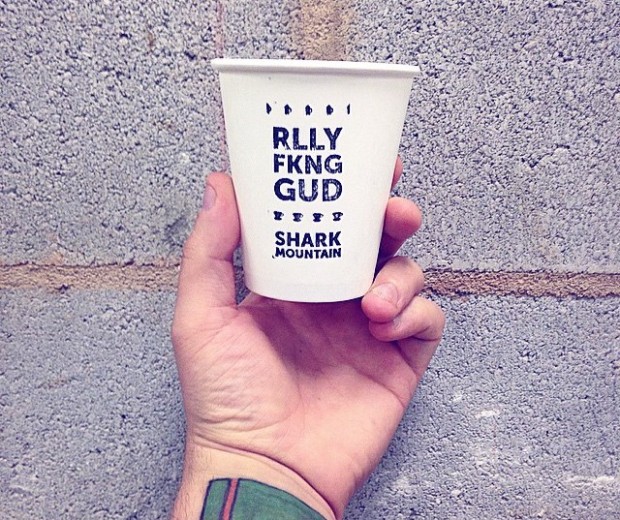 “When we’re tasting a chocolate bar, I’m in no way thinking about chocolate, I’m thinking about everything else that it tastes like,” said Nuckols, who said he also looks at a coffee flavor wheel while tasting chocolate. “It’s so much less of a mind-fuck for people to taste a chocolate and be able to say ‘yes, this tastes like cherry,’ or ‘this tastes like banana.’ And once they’re surprised by that, you can say ‘actually, it’s the exact same thing with coffee.'”

Beyond their wholesale clients and chocolate product stockists, Shark Mountain Coffee also has two retail locations, both of which are coffee counters built within other institutions. One is at the iLab entrepreneurial incubator at the University of Virginia’s Darden School of Business, where the espresso bar boasts an eye-catching two-group Victoria Arduino Athena spring-lever machine. The other just opened about six months ago at a coworking space called Studio IX, centered on a more conventional semi-auto La Marzocco FB80. As for what comes next, it probably won’t be another shop.

“I personally don’t particularly like the idea of growing too big. I feel like even having two shops kind of makes me a little uncomfortable. It’s confusing, and it’s difficult,” said Nuckols, giving credit to his supportive and enthusiastic staff and partners for keeping the two outlets running smoothly. For Nuckols, true to his creative, tinkering spirit, the expansion of Shark Mountain won’t be in retail footprint, but in the product line. And while coffee and chocolate remain endlessly fascinating, they’ve spurred curiosity about something even more mysterious and unique: Cola nuts. 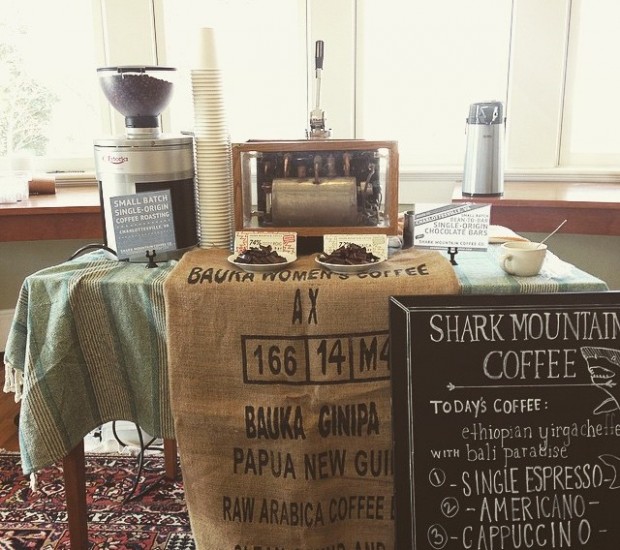 “I’ve done a little bit of research, and they actually, on a chemical level, are very similar to chocolate,” said Nuckols. “Their chemical makeup is astoundingly similar. I’ve sort of conjectured that if you could get your hands on some, and roast them and process them in the same way you do chocolate, you could potentially get something along the lines of a cola bar.”

So from the coffee bar came the cocoa idea, and from cocoa came chocolate bars, and from chocolate bars there might come cola bars. Has this mountain jumped the shark? Not if the quality is always there. Said Nuckols, “We came into chocolate with this sort fascination with what’s possible, and I think that what I would like to do in the future is to continue that, and just be playful.”

Well it’s about time. I’ve been enjoying chocolate with my coffees in various forms of both for decades now. Bravo. Best of luck to you.