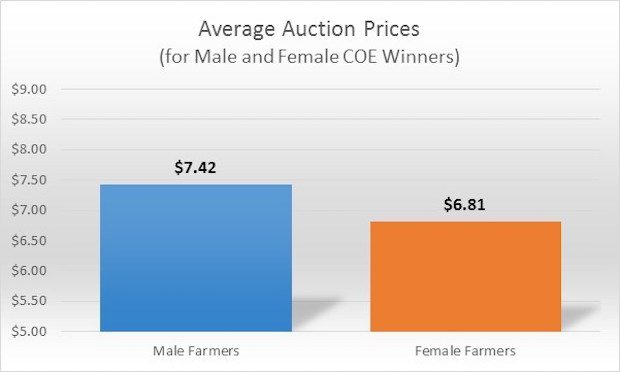 Despite comparable coffee quality, female farmers were paid $0.61 less than their male counterparts on average in Cup of Excellence winner auctions in nine Latin American countries between 2005 and 2015, according to data compiled by Transparent Trade Coffee.

Before digging deeper into TTC’s numbers or discussing gender equity in the coffee trade at large, a few qualifying caveats may be in order:

Of the 1,977 winning COE lots tallied by TTC — 262 were not represented in this data, as research assistants from Nicaragua and El Salvador could not ascribe a sex to the listed representative based on name — approximately 18 percent were represented by women.

It is worth noting that the premiums paid for the very top-scoring lots at COE auctions typically often far exceed those for other COE winners, creating some potential to skew the data. In total, the average per-pound price paid for coffees represented by males was $7.42, while the price for coffees represented by women was $6.81. Both these numbers greatly surpass local market norms, a testament to the efficacy of the COE program.

However, the $0.61 price differential (8.2 percent) is “not explained by differences in coffee quality,” according to TTC’s notes.

“In fact, the average cupping score for women-grown coffees was only 0.1 point (0.2%) lower than the average score for the men,” TTC says in its latest insight. “We also examined the average competition ranks, quantities submitted for auction, and prior COE wins for both groups of farmers. In all cases, there were no significant differences between the men and the women. Something else is responsible for the lower prices received by women for their excellent coffees.”

The underlying suggestion of what that “something else” might be, of course, is gender bias, particularly among coffee buyers.

“We know that COE competitions do not reflect the totality of experiences for specialty coffee farmers,” TTC says, acknowledging the programming and educational efforts of groups like the International Women’s Coffee Alliance, the Coffee Quality Institute, Root Capital and the SCAA in helping to address gender inequity issues in coffee. “However, this price disparity is disturbing given how important $0.61 cents per green pound can be for a coffee farmer and her family. Thus, we close with a call to those interested in gender issues to join us in thinking about what lies behind this specific bias within specialty coffee markets, and how we might respond in our various programs and projects.”

I would like to see a breakdown of auction results on a year by year basis. A LOT has changed in the years of data gathered for this “survey”.
Further, while raw cup score is an indicator of quality, it is not an indicator of style. Could it be that the styles of coffee as presented for the COE might differ somewhat between men and women producers? I think its at least a possibility.

The only way to really determine wether there is a bias, and an interesting experiment into the bargain, would be to simply stop listing the “nombre” (given name) of the presenting party, instead only listing the “appellido” or surname.

I have seen and purchased lots from other smaller auctions, in some cases several lots from the same estate being presented for judging. Various names were associated with the different lots, obviously some male some female. Pricing on the various lots reflected nothing more than quality and the perceived value of the specific style of that lot as presented to the competition. I bought on cupping notes, not on score. I ended up with some amazing coffees that “happened” to have been grown by women, but that did not enter into my “equation” in the slightest. Pooled cupping notes from the final rounds of judging is what drove my buying decisions. The slight variations in price were irrelevant, as was the gender of the representative of the producing origin.