One Coffee’s Sojourn Measured in Human Hands and Daily Temperatures 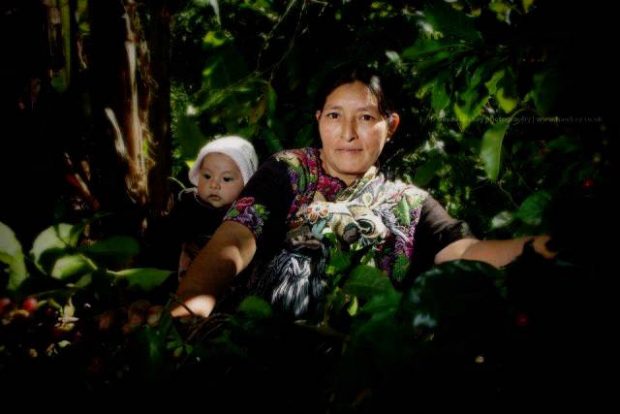 All images courtesy of Royal Coffee.

Once a coffee cherry is picked from the branch, every step it takes until it’s brewed is a desperate act of preservation, a struggle against the entropy that will inevitably degrade the dying seed. In a perfect world, short distances travelled in stable environments would contribute to that preservation — but the coffee-drinking world isn’t confined to the tropical climes in which the tree thrives.

An arduous journey, typically across an ocean, awaits between the farmer and the consumer, complicated by notoriously hot and humid port cities, unpredictable weather anomalies, and wild seasonal shifts in climate across much of the globe. Throughout that journey, coffee will pass through the fingers of skilled tradespeople, day laborers, machinists, cuppers, graders, truckers, sailors, forklift operators, and a host of others.

This is a story about all the unseen hands in the supply chain — the unsung laborers tossing jute bags on and off of trucks, the teams of logistic personnel tracking criss-crossing ocean liners and lumbering freight trains, the organizers at warehouses squeezing one more inventory item into already overstuffed floorspace and making damn sure it’s logged and ready to move at a moment’s notice.

It’s also a story about how a cup of coffee is changed, both physically and intangibly, by each of the hands it passes through. 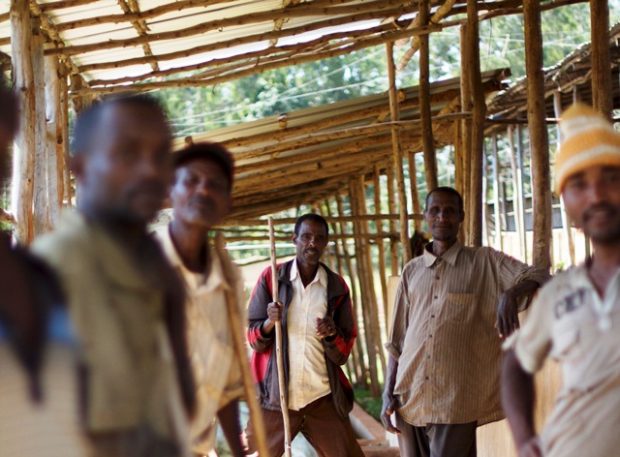 We wanted to take a look at the effect of that journey on a specific lot of coffee in transit from Colombia to California, and we were especially curious how different packaging might help or hinder the preservation of quality along the way. So we outfitted four bags with ambient temperature sensors — two stuffed in GrainPro lined jute bags, and two in unlined jute — and sent shipping instructions. And waited. Once they landed in our warehouse in Oakland, we popped open two of those bags — one of each storage type — and switched their packing material. Then we measured the coffee’s moisture, tasted a few roasts, and waited some more.

While we were waiting, I played a little numbers game. I asked our contact, Steven Diaz at ExpoCafé, to give me some basic estimates from his experience. He told me that this container, containing 250 bags at 70 kg each, came from around 200 farming families. The majority of farms average just 3 hectares of coffee plants each, where a husband and wife team generally manage to take care of all the harvesting and wet processing themselves. On a coffee farm averaging a little larger, say up to 10 hectares, it can take maybe four to six extra seasonal workers to help with the harvest. Add it all up, and for one container of coffee somewhere in the neighborhood of 650 people helped to harvest. This doesn’t even include the scientists who did the research on the varieties and soil, the government agencies who support the farmers, the people who work in the stores selling seeds and farm supplies.

After harvest and wet milling, the coffee must be sorted and prepped for export. The dry mill, owned by the cooperatives that also own ExpoCafé, adds another 5-10 administrative staff and 10 day laborers. After driving the coffee from the farm to the mill, after sampling and approving, and after the day of hulling, sorting, separating, bagging, and storing, another 150 people will have had a hand in the process. 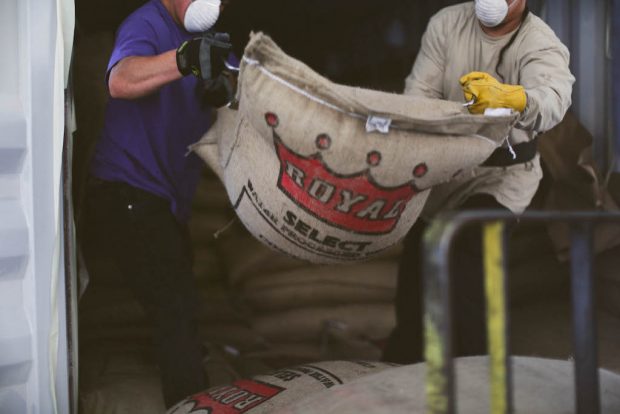 Let’s not forget the dedicated teams of logistics specialists both at the exporters office, Royal’s office, and those managing the direction of the trucks, trains, and boats. After the coffee is released from the exporter, it is loaded onto a truck, driven from the mill to the port, stuffed into a container, loaded onto a ship, and sets sail from Buenaventura, Colombia, to Balboa, Panama. There, the coffee is offloaded and waits for a new vessel to arrive. Once back on the ocean, it heads for Oakland, where customs checks are required before the container is released to us. Then a truck driver delivers it to our warehouse, and after delivery, a sample is delivered to our QC lab, where it’s roasted and cupped by all of our trading team.

Samples are sent to the prospective roaster, and when they’re approved, our respective finance teams work out payment details. Then the roaster’s team of quality control, roasting, and productions specialists go to work. There’s marketing, packaging, and administration. There’s the staff of baristas, the trainers, and managers. And there are all the people that designed and manufactured the equipment used to process, roast, and brew. 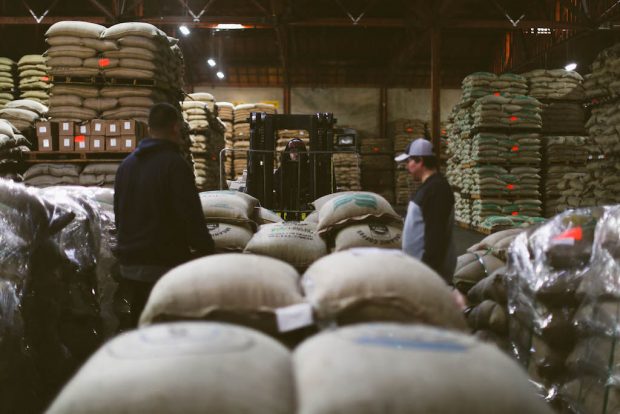 It’s something we say, sometimes a little flippantly, but there are literally hundreds, if not thousands, of people who have a hand in getting the coffee from the tree to the cup.

The coffee arrived, and with the help of Morgan Jones at MoJo Labs, we extracted temperature and humidity data from some the dataloggers. Here’s what we found: There were significant changes in temperature and relative humidity throughout the journey. However, the temperature, at least as read by our instruments, did not fluctuate significantly relative to packaging type.

The graph below shows the whole journey as temperature over time, including all four bags. There are 92,496 individual data points represented here. A few interesting notes: The temperature is at its highest once it is trucked from the mill in Popayán to the port of Buenaventura, and the GrainPro package peaks a little higher than the rest of the bags. The temperature remains high throughout the ocean journey, spiking briefly as the container is loaded onto the ship and again as it’s offloaded in Oakland. Once it is unpacked in our warehouse in early February, the temperature has dipped to a very friendly temperature, and gradually rises with the seasonal changes into the middle of June, when the sensors were removed from the packages and the data was gathered. You can see the storage conditions, at least in Royal’s warehouse in Oakland, are quite ideal in terms of average temperature.

While this was interesting data, it didn’t really do much to distinguish what was happening to the coffee in different packaging types. What we needed for that was a moisture meter and our palates.

Below is a graph of the moisture measurements taken over time. The first data point is from ExpoCafé before shipping. You can see that the coffees packed in jute (represented in yellow and orange) gained significant moisture during the journey, especially compared to the untampered GrainPro (blue). We pulled a sample on arrival (February 8), and a second sample the day the sensors were removed from the bags (June 15), and compared moisture readings with the original sample kept in the office.

Interestingly, the jute bags both lost significant moisture between the two dates of sampling, while the moisture loss in the GrainPro packed coffees was far less severe. The dotted lines on the graph connect the first sample originally taken from the warehouse to the office in February to the second sample taken in June.

Noting these changes in moisture stability, it’s not hard to guess what the next observations would be. The taste of the coffee was strongly affected by packaging type. This conformed with our suspicion that GrainPro packaging would help preserve flavors best. The jute-packed coffee began showing signs of fading much earlier than the GrainPro. I believe this is probably related, at least in part, to the moisture migration. Additionally, the coffee that was shipped in jute but repacked in GrainPro benefitted both in moisture content and quality in blind tastings.

We gathered relative humidity data, too, but unfortunately something went wrong with the data — possibly the dust from the coffee interfered with capturing good readings. Regardless, it’s an interesting area of study we hope to look into more in the future. I also stumbled across this study while I was researching for my series on molds, mycotoxins, and coffee a while back, and thought it brought up an interesting point: Coffee near the edges of the container is more susceptible to temperature changes and condensation than the bags packed near the center.

In any case, there appears to be a good argument for using a protective lining if an exporter, importer, and/or roaster are interested in quality preservation and product safety.

Before signing off, I should say that this project wouldn’t have been possible without the expertise of longtime partners at Expocafé in Colombia, especially Steven Diaz who coordinated and communicated with us from Bogotá. Additionally, Morgan Jones at MoJo Labs provided invaluable technical support in the form of the sensors used for datalogging, the software required to read them, and the data transfer that made it possible for me to stare endlessly at the hundreds of thousands of data points collected.