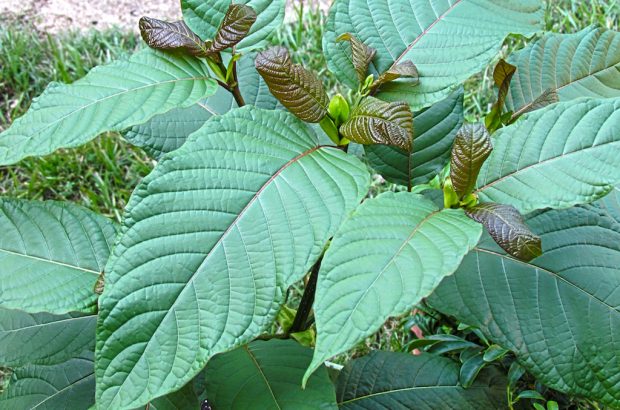 Coffee’s funky little cousin kratom may finally be banned by the U.S. Drug Enforcement Agency, graduating to a controlled substance from merely being a “drug or chemical of concern.”

The plant and its derivatives have been used for recreational and medicinal purposes in Southeast Asia for as long as anyone can remember, and the DEA’s proposed criminalization of kratom has sparked protests in Washington, D.C., and a petition with more than 120,000 signatures.

Indigenous to Thailand, Indonesia, and Malaysia, Myanmar, and Papua New Guinea — all of which, not coincidentally, are coffee origins — kratom is the anglicized word for Mitragyna Speciosa, a tropical plant in the coffee (Rubiaceae) family, and its leaves bear a striking resemblance.

U.S. customs and drug enforcement officials have been seizing kratom with increased frequency in the forms of powder, plant, capsules, tablets, liquids, gum/resin, and patch, and the substance has become widely available in U.S. stores and through online sales.

While only two kratom exposures were reported to the American Association of Poison Control Centers from 2000 to 2005, the organization received 660 kratom-related calls between 2010 and 2015, the DEA said. Proponents of kratom praise it as a natural painkiller and for its reported ability to help treat addiction and mental illnesses.

“Because the identity, purity levels, and quantity of these substances are uncertain and inconsistent, they pose significant adverse health risks to users,” said the DEA, which expects to enact the criminalization of kratom by the end of this month.

While only two kratom exposures were reported to the American Association of Poison Control Centers from 2000 to 2005, the organization received 660 kratom-related calls between 2010 and 2015, the DEA said.

– This is purposely taken out of context in attempt to portray kratom as dangerous and cause mass hysteria. However, the truth is that this is actually a small amount of calls in context. Vitamins receive more calls to US poison control centers per year than kratom, per the American Association of Poison Control Centers, and vitamins are generally considered extremely safe. The kratom-related calls that were placed were almost all rated as mild to moderate cases; very few were considered serious or life-threatening, and again these were almost all the result of combining kratom with other substances. See their National Poison Data System Annual Report for 2014 for reference: https://aapcc.s3.amazonaws.com/pdfs/annual_reports/2014_AAPCC_NPDS_Annual_Report.pdf

Readers should also know that kratom has developed a large following due to it’s ability to aid in the recovery in opioid addiction by easing withdrawal symptoms without risk of fatality. Considering the epidemic our country is currently facing with prescription painkiller deaths (over 10,000 per year), the health benefits of kratom absolutely must be explored and researched. A Schedule 1 classification seriously hinders that possibility, as supporters of medical marijuana should know.

The DEA is endangering the lives of countless American’s with it’s decision, as those who use kratom as a lifeline to stay above deadly opioids risk falling back to them. Search #iamkratom on youtube to see testimonials from hundreds of people who owe their wellbeing to kratom, and read this article by pharmacologist Jacob Sullum condemning the DEA’s actions http://www.forbes.com/sites/jacobsullum/2016/09/01/the-deas-crazy-kratom-ban-dresses-pharmacological-phobias-in-scientific-garb/#4b666d7a4f86

Yet more proof that the DEA (and FDA) are puppets of Big Pharma.