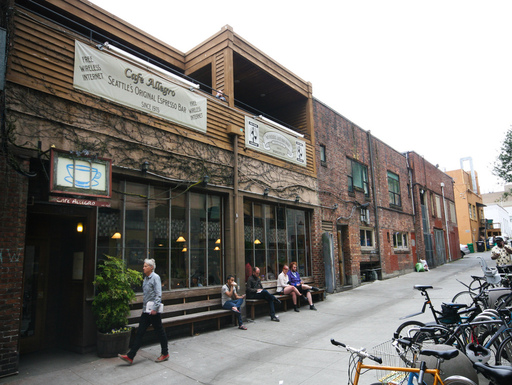 Few American cafes carry the kind of historic weight as that of Seattle’s Cafe Allegro.

The cafe, which hangs a banner announcing its place as “Seattle’s Original Espresso Bar,” was founded inside a former mortuary building in the University District in 1975 by Dave Olsen, a longtime colleague of Howard Schultz who would later become the head buyer and Roaster for Starbucks. In Schultz’s autobiographical history of the business, he says Cafe Allegro served as a more bohemian prototype for the original Starbucks stores, and that Olsen helped develop the original Starbucks espresso blend.

So it’s kind of a big deal that Cafe Allegro — which was purchased from Olsen by former employees Chris Peterson and Nathaniel Jackson in 1990 — is in the process of launching its own roasting operation. The Allegro team is taking the decidedly contemporary business approach of crowd-funding, with a three-phase plan that will eventually add a roastery, an expanded seating space with performance meeting capacities, and a coffee education bar.

(more: After 20 Years, Coffee by Design Goes Big with New Roastery and Bar

As of this writing, the company’s Crowdtilt campaign had built up $5,800-plus toward the $10,000 goal that would allow the roastery to open this Spring. Here’s a bit from the Allegro team on why they are expanding in scope:

It’s been harder to stay ahead of the curve and ahead of the competition, and while we are doing fine now, we have to look to the future of Cafe Allegro and plan on doing what we can to make sure the next thirty-eight years are just as amazing. The new roastery will provide more opportunities for our staff, help keep prices reasonable, and expand our reach to the global coffee community.