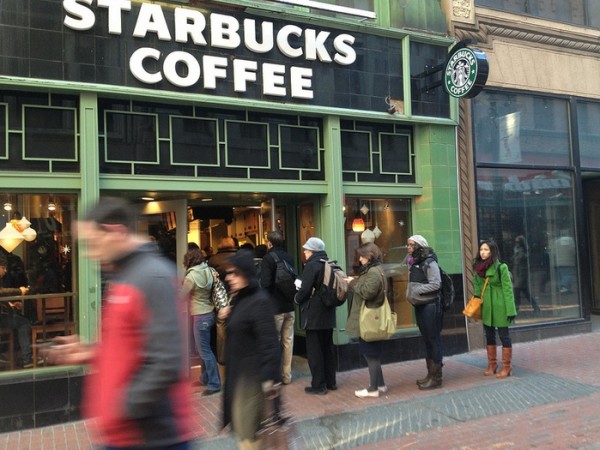 The study, recently published in the International Journal of Social Science Studies, explored the shops under the lens of Ray Oldenburg’s famous concept of a “third place,” a social environment that is not the home or a typical workplace. Anthropologists used unobtrusive observation as the primary means of research, making notes on five categories: seating arrangement; how welcoming the spaces were; the activities of the people; amenities (WiFi, for example); and the overall atmosphere (music, colors, decor, etc.). It should be noted that the researchers focused strictly on environmental factors, making no attempts to quantify the quality of the food and drink products.

The three Boston independent stores observed were Pavement Coffee House, Diesel Cafe and 1369 Coffee House. The Starbucks locations were Copley Square, Davis Square and Central Square. While the published study repeatedly makes mention that the research was limited and that any number of human factors may change in a given day, their most disparaging report may be that on the helpfulness of baristas between the two coffee shop types. From the study:

“The Starbucks baristas would help customers by explaining the many options available and even offering suggestions. In contrast, the baristas at the independently-owned coffee houses were more aloof and would just wait or sometimes stare at a customer, offering minimal assistance.”

That said, Starbucks seemed to get the best reviews in large part because of non-human environmental factors, such as availability of large work spaces, the numbers of available electrical outlets and the prevalence of Wi-Fi. And researchers also noted that the independent shops offered the kinds of personal touches that are not allowed at corporate chain stores:

Independent coffee houses offered local flavor that Starbucks does not. They catered to their home neighborhood in part because they are not restricted by stringent branding rules. This allows patrons to feel more comfortable and at home, with the presence of locally-made furniture, art, and even photography. In addition, specially designed seating allowed many people to sit together and encouraged conversation. However, independent cafés were largely characterized by limitations placed on customer productivity in the form of time restrictions, lack of workspace and outlets, and fees for Wi-Fi. All of these presented barriers to attracting customers and meeting their needs in a modern, connected culture. But despite fewer technology-supporting amenities, productivity is not impossible at these locations.

The research team also said future research on this topic should include more observations, interviews, and a greater diversity of coffee shop types and coffee shop locations. Click here for the full text of the study.