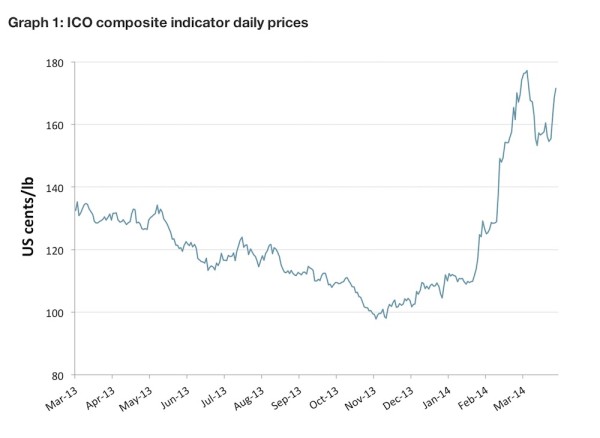 Uncertainly regarding the current harvest in Brazil created unprecedented volatility in global coffee prices throughout March 2014, according to the latest report from the International Coffee Organization (ICO).

In 10 days from the end of February into March, the ICO’s composite indicator price ranged from a high of 177.29 UC cents per pound to a low of 153.33, although the March monthly average for commodity coffees was up 20 percent from February’s average, to 165.03, representing the highest monthly level in what has been a very down two years.

Dry weather throughout December in Brazil is the primary culprit for the uncertainty, which should begin to dissipate as more accurate reports from the country’s current harvest begin to appear.

The London-based ICO, which tracks futures markets on the London and New York exchanges, is sticking with last month’s prediction that global demand increases and Brazil’s compromised harvest could lead to a slight deficit, which could cause a further upswing in commodity prices. From the ICO:

Ongoing uncertainty over the Brazilian coffee crop has caused significant fluctuations in coffee prices during March, with monthly volatility of the International Coffee Organization (ICO) composite indicator price exceeding 10% in both March and February. The daily price of the ICO composite ranged from a high of 177.29 US cents/lb to a low of 153.33 in less than ten days. The monthly average of 165.03 US cents/lb was nearly 20% higher than February, and the highest monthly level in two years. International prices remain unsteady and sensitive to weather events in Brazil.