It seems 2015 is shaping up to be the year of gender equity in specialty coffee production. 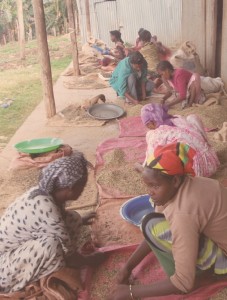 CQI is conducting research on the issue as part of the industry-driven Partnership for Gender Equity, and the SCAA has announced a Symposium session on gender equity – a good sign that this is an issue whose time has come.

In a spirit of collaboration (and humility), here are six lenses on gender that inform us in our work at CRS and may be helpful as the specialty coffee community rolls up its sleeves to get to work on this issue.

1. ROLES and RESPONSIBILITIES: The gender division of labor.

In many families around the world — and not just in the global South — men and women develop different roles and responsibilities. Some tasks are regarded “men’s work” while others are considered “women’s work.” Sometimes this gender division of labor the result of an explicit agreement, but often even the most calcified gender roles are the result of tacit agreement and unexamined tradition.

I wrote about this issue here, using baseline data from our Borderlands project in Colombia to show how a gender division of labor in the coffeelands means that men and women know coffee differently. While a gendered division of labor is not inherently bad, engagement by outsiders without a clear understanding of existing gender roles and responsibilities can be.

2. ACCESS TO and CONTROL OVER RESOURCES: Who brings home the bacon? (And why does it matter?)

Understanding who in the household has access to and control over resources is also critically important for the promotion of gender equity.

Why does it matter?  Because a significant body of research shows that women and men spend money differently. More specifically, it shows that women tend to spend more of every dollar than men on household nutrition, education, and children’s well-being. The developmental return on women’s spending, in other words, is higher than on men’s spending.

The recent surge in investment in women’s empowerment and income-generating activities for women reflects, at least in part, this understanding of the relative returns on investments in women and men.

Access to and control over resources is critically important. But even household members who don’t directly control resources can influence how those resources are allocated.

For many years, microeconomics regarded households as unitary actors whose decisions were made in ways that maximized benefits for everyone in the household. More recently, the “unitary household model” has made way for different models of household decision-making that focus on bargaining and consider the role that intra-household inequality plays in shaping the outcomes of such negotations. Gender-based inequalities, of course, play a significant role in determining how these decisions are made and whom they favor within the household.

Often the position of women in household bargaining is influenced by what resources they bring to the table and control as a result of their own economic activity.

4. PARTICIPATION: What men and women do.

How do women participate in public and economic spaces?  How frequently?  How assertively?  How effectively? The most frequently cited data points in gender discussions tend to be the number of women in coffee cooperatives and in coop leadership positions. These data are hardly sufficient to constitute empowerment, but they are important indicators of the kinds of participation that are essential for women to achieve better outcomes.

One of the reason’s that women’s marginalization is so hard to address is that it is fueled by pernicious patriarchal stereotypes and beliefs about women’s role in society. Surfacing these biases is important to understand what women have to overcome to attain equality.

CAPABILITIES: What women can do and be.

Taken together, these six factors go a long way to determining the possibility frontier for women: what they can reasonably hope to do and be in life.

This focus on being and doing is a defining one in the “capabilities approach” to international development pioneered by the Nobel laureate Amartya Sen and award-winning philosopher Martha Nussbaum. I have been particularly attracted to this approach since it marries philosophical rigor (it is rooted in the Aristotelian tradition) with empricism: It defines development–and gender equality–on the basis of observed outcomes. People’s ability to participate in political life. To participate in market transactions. To be healthy. To grow old. To, in Nussbaum’s words, “lead a life that is worthy of the dignity of the human being.”