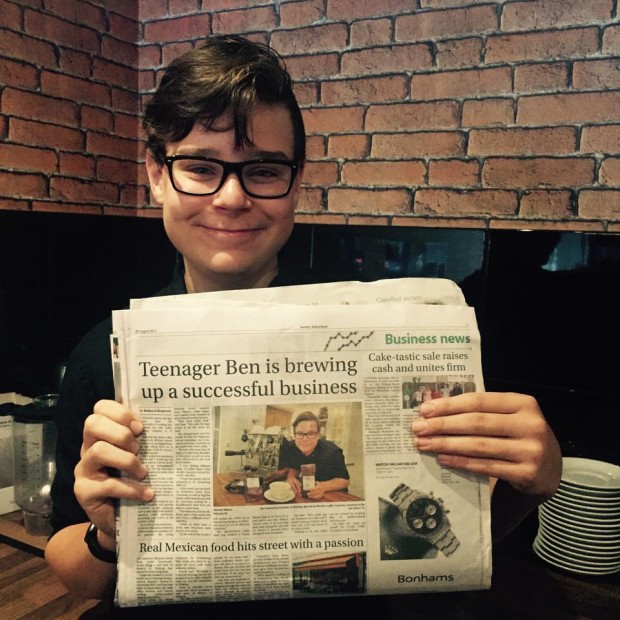 It’s a commonly held perception that the occupation of the barista is a young person’s game. Could roasting be next? If Ben Garnett, the teenage roaster and proprietor of the Profile Coffee Company is any indication, the answer might be yes.

“I have only recently made coffee available for the customers to buy,” Garnett told Daily Coffee News in an email. Garnett had previously been roasting only for himself, his family and friends on a Gene Café roaster in his home. Then, when Garnett’s school organized a trip to Malawi last year in partnership with the All Saints School there, inspiration struck. “I wasn’t on the Malawi Trip in 2014,” Garnett said, “but I’ve always found the partnership with Malawi interesting.” To do his part in support of their partner school in the struggling African nation, the 14-year-old barista at Penny Blacks Coffee House in Woking, Surrey, UK, set about a fundraising project of sourcing green Malawian coffee and roasting and selling it at his school fete.

“This went down very well,” reported Garnett, who then decided expand his coffee endeavors into an earnest entrepreneurial endeavor. So was born the Profile Coffee Company, through which Garnett continues roasting and selling coffees of various origins, from a variety of sources. “I use many different suppliers online, but my main one is Coffee Compass,” said Garnett, who also hopes to upgrade from his Gene Café to a larger, commercial-grade machine sometime soon.

Apart from the altruistic fundraising motivations, specializing in Malawian coffee could also be viewed as a shrewd business move for as long as his business remains small. Malawi only contributes about 0.01 percent of the world’s coffee supply, making it an unusual offering that might help Profile stand out in the short term. Apart from that, Garnett’s vision for Profile is to couple variety with intimacy — offering customers plenty of options while catering to individual tastes as much as possible, with as personal a touch as can be.

“There are a few local roasters that I really like, Beanberry and Café Maison being the main ones,” said Garnett. “For Beanberry, it is the experimental coffee and all the different single origins and all the blends that are available. For Café Maison it’s the personal relationship I have with the owner who supplies the shop. He really makes you feel special, and I’m trying to combine both into one company.”

Profile Coffee Company has so far offered coffees from Brazil, Colombia, Ethiopia, Kenya, and more. Garnett is on the hunt for commercial accounts to supply, although this may prove challenging while stymied by the half-pound capacity of the Gene Café. Said Garnett, “We have been in contact with some shops to supply them, but there are no done deals as of yet.”

In the meantime, Garnett will continue taking it one step at a time, expanding retail and looking forward to the day when Profile constitutes a roastery café unto itself. “If it is financially viable to open my own shop I would love to do that,” said Garnett. “In the area where I live there are not many coffee shops that roast and use their own beans. I would like to take some of the great coffee ideas out of London and bring them to a larger audience.”

This is essentially an article about a glorified lemonade stand catering to the precocious set.