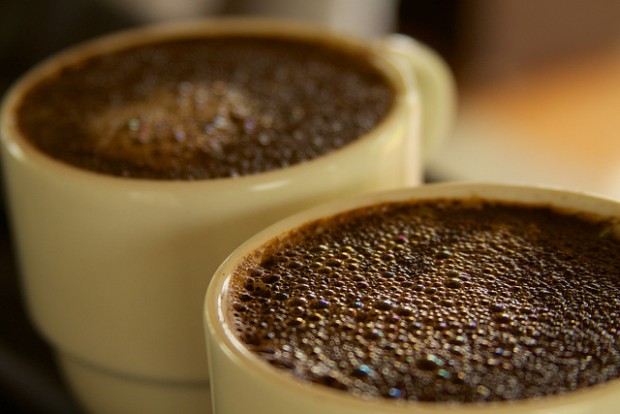 It was 12 years ago that Oxford University Experimental Psychology Professor Charles Spence authored an innovative study concluding that people preferred the taste of potato chips more when they perceived more of the crunching sound during chewing.

Spense’s work since then has further developed his concept of “sonic seasoning,” the idea that our perceptions of taste and flavor vary — potentially dramatically — depending on the sounds we hear during tasting.

While Spence delved further into his theories on sensory perception in coffee during a 2014 SCAA Symposium presentation, he more recently met up with Dan Pashman of the WNYC-partner podcast The Sporkful to explain the sonic seasoning theory, urging listeners to play along with the experiment using either bitter chocolate, beer or brewed coffee.

At the beginning of the experiment, Spence urges Pashman to taste the food/drink in a sound-free environment to create a kind of sensory control. If you have coffee in hand, take a long sip (or a more formal slurp) now, and focus in on primary taste characteristics, namely bitterness and sweetness.

Now, rinse your palate and do the same thing while listening to sound clip #1:

Rinse again, and sip again along with sound clip #2:

“All of these tastes and flavors — bittery and sweet, chocolatey or not — those are all kind of milling around somewhere in your head, and your brain can only deal with so much information,” Spense tells Pashman during the episode. “By playing that kind of high-pitched music, it draws your attention to the sweet taste.”

Spence further estimates that the sonic seasoning as used in sound clip #2 results in an approximately 10 percent increase in the perception of sweetness.

Here’s Spense at the 2014 SCAA Symposium: