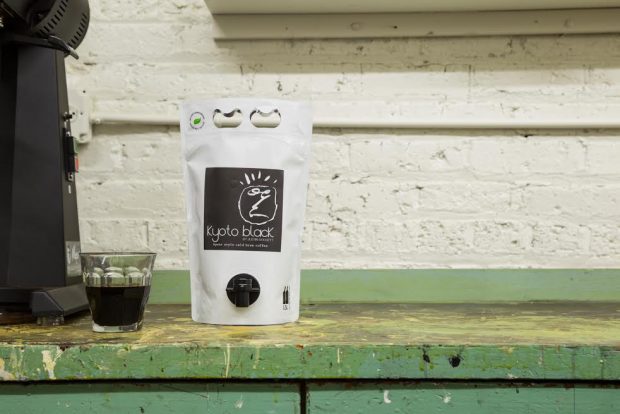 Cafes that utilize tall, ornate-looking Kyoto-style slow-drip cold brew makers benefit not only from the spectacle of these towering devices, but from the rich and unique product the process yields. Meanwhile among the ever-rising tide of RTD cold brew beverages that are mostly made in the same common steep-and-strain, Toddy-style method, differentiation can be a challenge.

While plenty of exceptions exist, none so far has laid claim to the Kyoto style as the technique behind an RTD beverage. None, that is, except for Kyoto Black, an RTD product rolled out by young, Chicago-based former barista Justin Doggett in January of this year.

Doggett left his position as barista trainer for Metropolis Coffee Company in October of last year to develop the idea and bring it to market: Kyoto-style slow-dripped cold brew in a bag. Using a system of gravity-fed, slow-drip brewers of his own design, Doggett currently brews five simultaneous 1-gallon batches at a time, which he then packages in 1.5-liter Mylar Astropaq pouches that he sells for $40 apiece. Sales are mostly online, though he has fulfilled a few special orders for select restaurants, including Alinea, which served Kyoto Black the day it won a James Beard Award.

Presently there’s only one iteration of the product, a dark-roasted blend of beans from Guatemala and Brazil for which he partners with Metropolis, his former employer. The Brazilian coffee was one that Doggett helped develop while still on staff there, and was an eye-opening one in terms of the potential for a well-executed dark roast. “That was not a ‘Metropolis’ coffee, it was roasted by Metropolis for someone else,” Doggett disclaimed to Daily Coffee News. 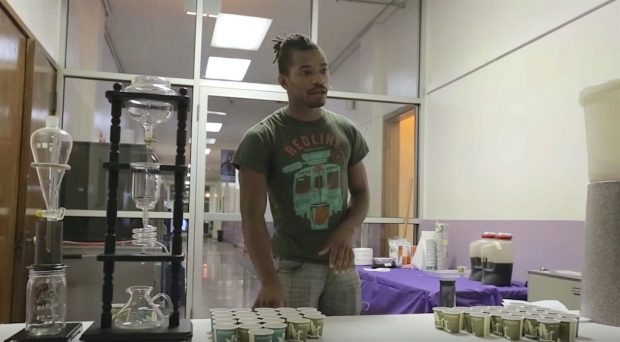 “I helped them develop that for this particular client, and in that process I started to find this appreciation for the darker roast,” said Doggett. “I started to notice that darker roasts really play well with iced coffee, with cold brew, particularly Kyoto-style.”

Prior to Metropolis, Doggett had been making a slow-dripped cold brew at home using a tinkered Aeropress-based set-up. He brought a sample of that brew to his job interview at Metropolis, which helped him land the position as the company at that time was just bringing in a set of Yama glass towers. Said Doggett, “They were like, ‘wow, that’s really funny, because we just bought four brewers and we don’t know how to use them.'”

Doggett helped Metropolis dial in their method while using his experiences there as an R&D period of sorts for his own venture. Today the enterprising former barista rents a commercial kitchen space by the hour where he sets up the five mostly HDPE plastic brewers he built himself. He plans to move to a newer kitchen located near O’Hare airport outside Chicago when it opens in about two weeks, where he’ll be able to pay roughly half of what he currently does for a space in which to make a food product he can legally sell in Chicago.

The newer kitchen will also allow him to leave the premises while his product brews, given that there’s no heat or electricity involved for the six hours it takes for his proprietary recipe to complete. “I figured I would drive Uber or something while my coffee’s brewing,” said Doggett. “I’m signing up for it to make this happen.”

Kyoto Black has already shipped to customers in all 50 states, plus one in Switzerland that was willing to pay for the extra shipping cost. Doggett said he intends to spend the immediate short term focusing on organization, efficiency and a general streamlining of operations, then bring on additional workers to handle production as the business grows, freeing him up to build larger versions of his slow-drip brewing apparatus, the design for which he’s discussed with a lawyer to investigate patenting possibilities.

Hopefully in conjunction with these advances Doggett will secure a proper production space of his own, at which point, free from the financial constraints that come with paying for a kitchen by the hour, he’ll be able to experiment with lighter roasts and single origins as well as an eventual canned nitro Kyoto Black. Said Doggett, “I would ideally like to have a factory where my door never locks, because it’s always running.”