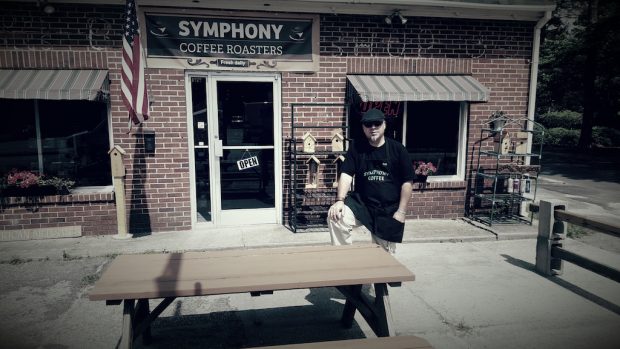 The many elemental notes contributing to a coffee’s flavor, the myriad factors that go into its production and the dozens of hands through which every bean passes make every good cup like a carefully composed symphony. The people of Hope Mills, N.C., just outside of Fayetteville just got box seats to that performance, now that Symphony Coffee Roasters has opened its doors.

The shop opened about six weeks ago, although roaster and proprietor Tony Vasquez has actually been roasting coffee in the area for about six years already. Vasquez ran the Trade Street Brews coffee shop located in the Hope Mills historic district from 2007 to 2012 and brought roasting in-house for that cafe in 2010. After shuttering the retail component to make time for caring for his ailing father, Vasquez continued to roast for local wholesale clients and markets.

Today, under the Symphony brand, Vasquez continues to package and sell the 10-12-pound batches he roasts on his Primo roaster to a growing number of wholesale accounts and directly to the public at the Fayetteville City Market, while also returning to retail in another commercial space in the same historic district. The 1,400-square-foot location consists of roughly 800 square feet of roastery space that’s separated by walls from a roughly 700-square-foot café. Espresso flows through a single-group Astoria machine while brewed options include pourover, Aeropress and cold brew in addition to batch drip. 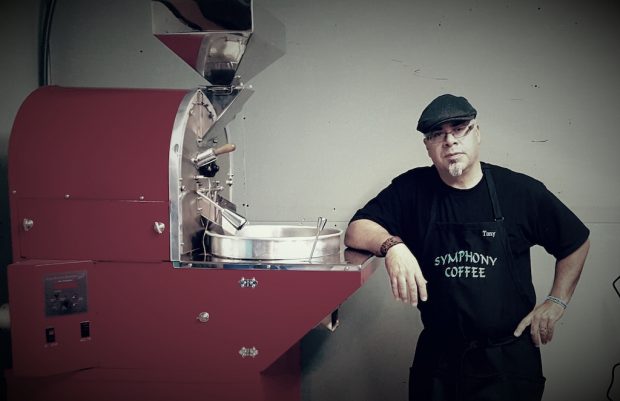 “Our coffees are a symphony of flavors,” Vasquez told Daily Coffee News of the beans he tends to keep on the light to medium side of the roast spectrum, profiling each origin with respect to its varietal and processing method, careful to avoid over-roasting. Notably, music was Vasquez’s original passion, and he owned and operated a music store prior to pursuing coffee. Trade Street Brews combined these passions by hosting performances and open mic nights.

“It’s not a broad stroke across,” said Vasquez. “Each bean has its own unique characteristics when it comes to roasting.”

A native New Yorker of Puerto Rico descent, Vasquez and his wife are both retired military personnel that came to love North Carolina while stationed in Fort Bragg. It was through an earlier assignment that Vasquez fell in love with coffee, when he moved with his two daughters to support his wife when she was assigned a five-year stint in Madrid, Spain. Said Vaquez, “I would visit a lot of coffee bars, and really, really admired the baristas and how they cared for the coffee.”

Vasqeuz sourced roasted coffee in the early years of Trade Street Brews through Cactus Creek Coffee out of Aberdeen, N.C., where he eventually sought the training of head roaster Mike Birky in the craft of roasting and sourcing. He passes some of that info on to his customers now through tours and classes at the roastery, where greens sourced entirely through South Carolina-based importers Balzac Brothers are browned just so.

“I just want to broaden people’s coffee experience,” Vasquez said. “I don’t want them to think that coffee is just a food item that you can only find at the supermarket, but that it’s an item you can find at specialty coffee shops like mine.”