In its variety of offerings and diversity of service approaches, the spectrum of amazing espresso experiences is as wide as it is colorful in Mexico City, the most populous city in Mexico. During one recent visit, I zipped around on the Metro at 5 Pesos per ride — about 25 US cents — from one borough to another, visiting eight recommended cafés in four municipalities and returning home with a bean-packed duffel in hopes of recapturing the Federal District’s heavenly coffee flavors.

Just when I thought I’d had the ultimate espresso experience, another café inevitably reset the bar, although it should be said that each of the shops on this list is equally worthy of a visit. Below are some reflections, organized by neighborhood, from one discerning traveler’s perspective. 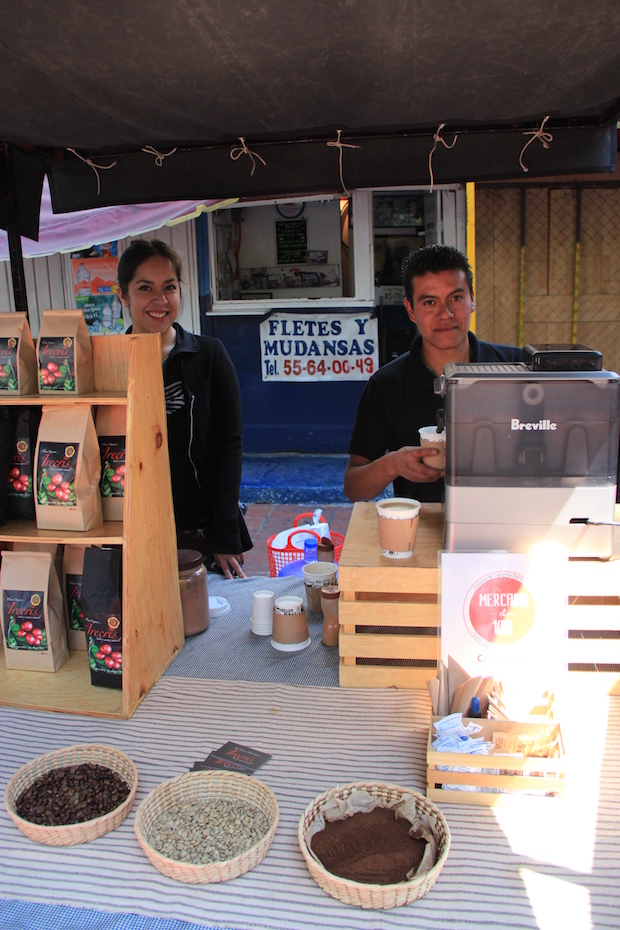 I found these folks at the Sundays-only Mercado el Cien. The owner, Cristobal, pulled me a shot while another barista, Denise, took my money. I didn’t expect the two transactions to be handled separately but I quite appreciated it. It’s such a small gesture, separating money handlers from drink makers, but it made clear, in my mind anyway, a commitment to quality. I stood at their booth sipping the shot, and when I was finished, I said in broken Spanish, “Oh my gosh, that was amazing!” Cristobal humbly nodded, and I could see in his eyes that he already knew that. 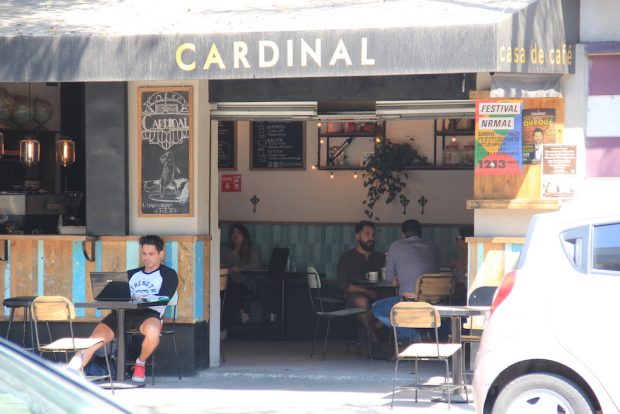 Cardinal is tucked into the heart of South Roma, surrounded by charming architecture and a progressive vibe. Something about the space is magnetic — the music, the hum of conversation, the churning espresso machine. Its decor is simple: a shelf of books, a row of globes, vintage glass bottles, an old desk fan, a steel rocket ship, red and white checkered tins. Each item seems meticulously placed to pique curiosity. There’s jazz playing loud enough to be enjoyed but quiet enough to ignore; ample seating for a gathering with friends or an introverted disappearance; a balanced yin/yang of public space.

I was greeted by Shak, a barista, who told me Cardinal pays homage to cafés of old. He crafted my espresso like a sculptor. It was so good that I accidentally left without paying, floating down the shaded streets, midday, riding high. When I doubled backed to pay, Shak laughed and told me it happens all the time. Why? Because the place makes people feel so very right at home. 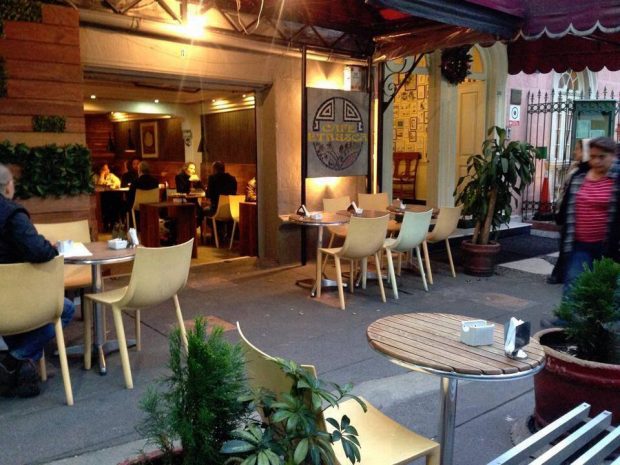 Upon my arrival at Café Etrusca, I was happy to find shaded seating on a quiet-ish street. In the dark interior, two young employees stood chatting behind the counter.

I greeted them before they greeted me, then ordered a double and found a seat on the patio. A barista set my demitasse on the table with care. It was a beautiful pull — deep sienna brown, a silky crema. Oddly, it reminded me of my Grandma’s stew, or the detail of a photo taken by the Hubble telescope. It had a clean finish, muscular with nothing to prove. After it sat a few minutes, more flavors erupted, as they might with, well, Grandma’s stew. 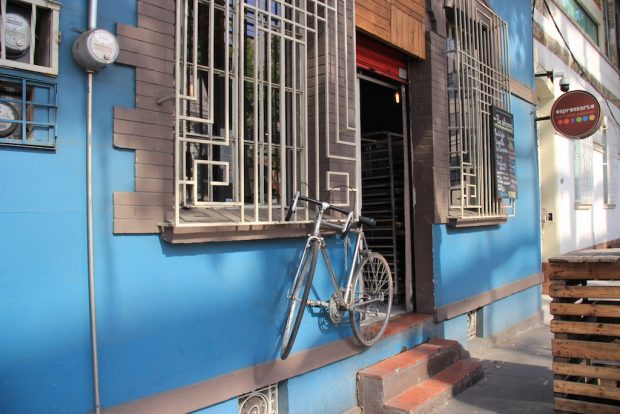 I could tell this place was different — no music, no fancy lighting or artwork, no distracting decor. Behind the counter, coffee master Abríl Solis carefully weighed scoops of ground coffee while mesmerized customers studied her every move. They watched her as if she were etching the Ten Commandments into a grain of rice. Her focus set the mood, her engaging conversation kept customers relaxed. They trusted her, stopped messing with their cellphones.

I too was hypnotized and asked for an espresso. The shot was alive — it gave me chills. It exuded the same quiet passion that the space emitted, reminded me of the importance of connection. So I stayed a while, introducing myself to strangers. 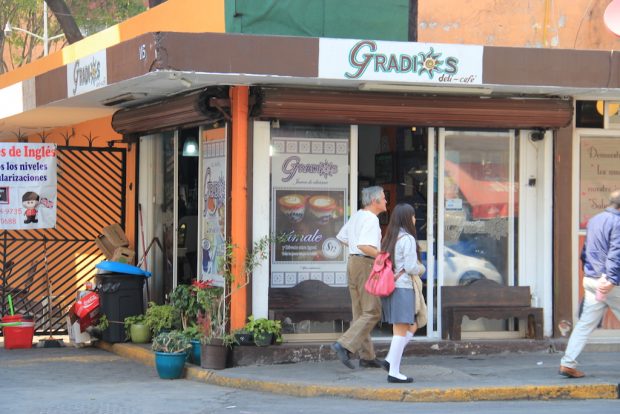 The space reminded me of a tiny house — one of those 100-square-foot jobs with beds that double as tables and ironing boards. There was not an inch of wasted space, with every nook smartly used for storage, preparation or display. Such creativity told me Gradios was serious about what they do.

I placed my standard order and grabbed a seat at a four-top. The barista delivered my order — its jagged foam cap bringing to mind a miniature mountain range. Workers buzzed around me, sweeping the floor and bussing small tables from the morning rush. The longer I stayed, the less cozy and more cosmopolitan it became. Once thoroughly straightened up, it suddenly felt somewhat posh. Before leaving, I asked if I could take a couple photos. They said no, but I took some anyhow. 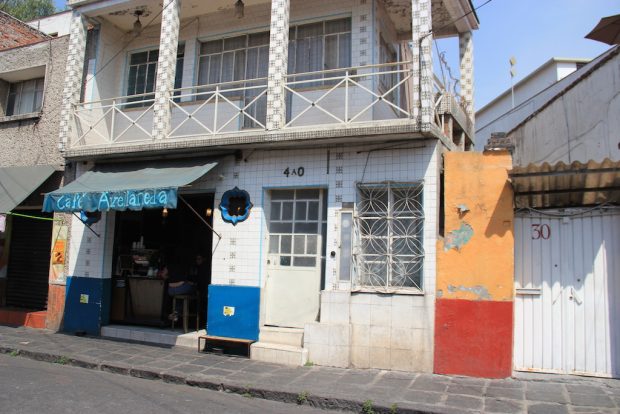 Avellaneda is the size of a one-car garage. I entered and was greeted by two baristas. Something about them made it clear they knew their stuff — probably their aprons. The indoor seating faced the bar and I watched as employees carefully crafted drinks, maintaining friendly banter that filled the cramped space. Between sips I stared at the chalkboard menu, converting peso prices into dollars.

I departed from my norm and ordered an americano. It arrived, and next to the cup sat a thumbnail-sized cookie. I thought it was a sugar cube, internally declared “when in Rome,” and tossed it in my cup. When it just floated on top I realized my mistake, so I scooped it out with a little spoon and downed it, hoping their were no witnesses. 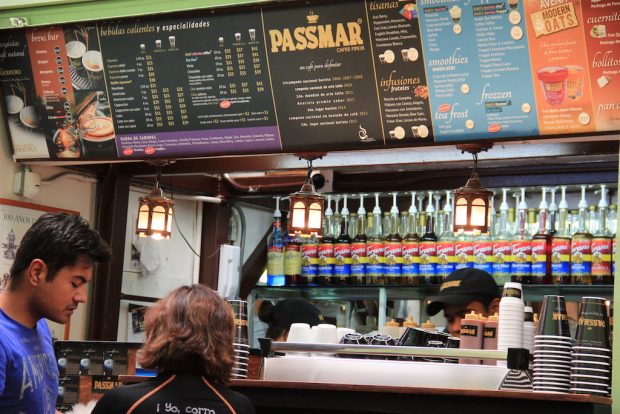 Café Passmar is compact and cozy, tucked into the indoor Mercado Lázaro Cárdenas. A quick look at the menu makes it obvious the place is all business. It could have been a Starbucks menu, offering not only every coffee drink imaginable, but also convenient packs of instant oatmeal and prepacked sandwiches.

The bustling crowd of shoppers through the market’s skinny aisles made my time at Passmar seem hurried. On my table was a tin that held straws, napkins, and sticks for stirring. A branded sticker affixed to the side translated to, “A father is a treasure, a brother is a comfort, a friend is both.” I agree, but fancy quotes can’t do the hard work for specialty coffee — and by hard work, I’m talking about giving customers a reason to fall in love with a business. But it’s the espresso that does that here. 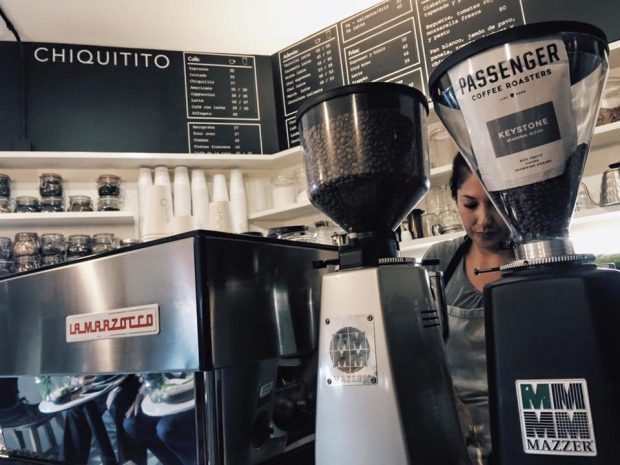 On my first pass, I walked right by. Doubling back, I wondered how I could have missed it, especially since I was supposed to be on the hunt. It was narrow and deep with a weatherproof front awning. I was welcomed as soon as I stepped through the door.

After placing my order I admired the geometric decor, tying together the café’s nuanced details. The most prominent design feature was painted on the wall above the bar — Chiquitito’s history and vision statement. Part of it read, “Buscamos conectar, crear y logar. Queremos construir y sea parte del mundo en el que queremos vivir,” which loosely translated means: “We seek to connect, create and achieve. We want to build and be part of the world in which we live.” I love that their vision transcends coffee, and that their coffee transcends words.

About the Author: Similar to a surfer’s global quest for the perfect wave, Tom Griffen obsessively seeks a world-rocking shot of espresso. A published poet, essayist and book reviewer currently based out of Carrboro, N.C, Griffen’s coffee “expertise” may be of the armchair variety, although over the years a well-developed palate for flavor and keen consideration of quality service has enhanced his perspective on the industry.

Tom Griffen
Tom Griffen lives for adventure and killer espresso. In addition to freelance writing, Tom is also a consultant in the specialty retail world. He is bassed in Carrboro, N.C.