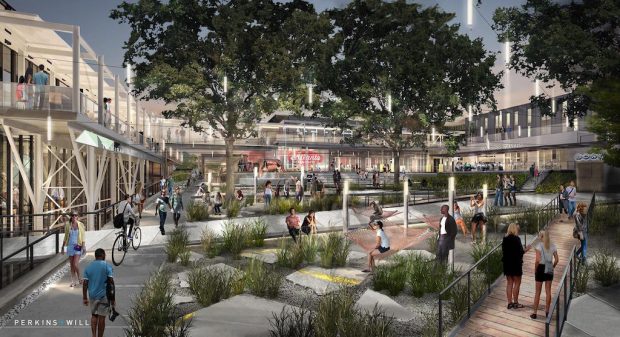 Atlanta Dairies rendering from Perkins + Will.

Project developer Paces Properties announced the addition of Thrive, which will be the primary coffee tenant within the mixed-use development of retail restaurants, live music venues and offices, expected to open in late 2017 at 777 Memorial Drive, near Reynoldstown and Cabbagetown in Near East Atlanta.

Thrive was built upon a model designed to empower its network of coffee producers by returning a percentage of consumer sales revenues back to the communities or individual facilities in which the coffee is grown and/or processed. The wholesale roaster was bolstered by a 2014 supply deal with the fast food chain Chick-fil-A.

In an announcement of the Thrive café deal for Atlanta Dairies, Paces Properties said the space will provide “a conscious coffee house experience that invites people to connect with not only the community but the farmers themselves.”

“The menu will build from a farmer-focused foundation, including artisan, handcrafted food, and additional beverage choices that empower producers globally,” Paces said in an announcement of the partnership late last week. “Designed by premier New York-based architecture and interior design firm, AvroKO, the café will reflect a commitment to excellence in both design, customer service and food and beverages quality.”