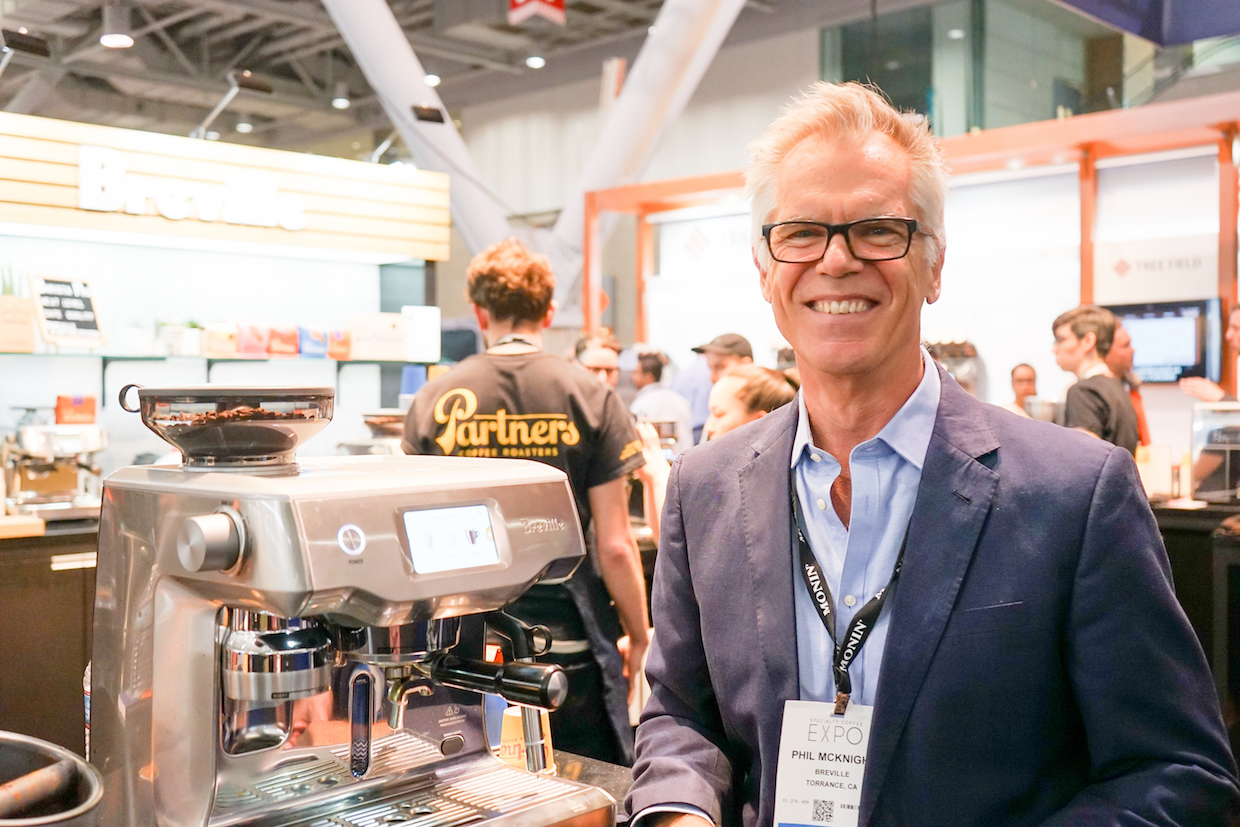 Phil McKnight, the global business manager of beverage for Breville, at the recent SCA Expo in Boston alongside the Breville Barista Pro. Daily Coffee News photo by Howard Bryman.

Companies that design equipment for specialty coffee shops have a lot to consider, but they can at least assume a certain level of skill among professional end users.

For consumers, however, all bets are off. The home kitchen can take many forms; retail prices for coffee equipment vary dramatically; and experience levels among consumers form a pyramid with a wide base of novices up to dedicated aficionados.

So it takes a special kind of soothsayer who can plot a course between what a large swath of consumers say they want, what they actually need, and what they’ll comfortably get the hang of.

For three years in a row and four times overall, espresso machines made by Australian home kitchen appliance company Breville have won the Specialty Coffee Association’s coveted “Best New Product” award in the consumer electrical category. All of these awards have landed under the stewardship of Phil McKnight, currently the company’s global business manager for beverage products, and its original coffee department soothsayer, as it were. 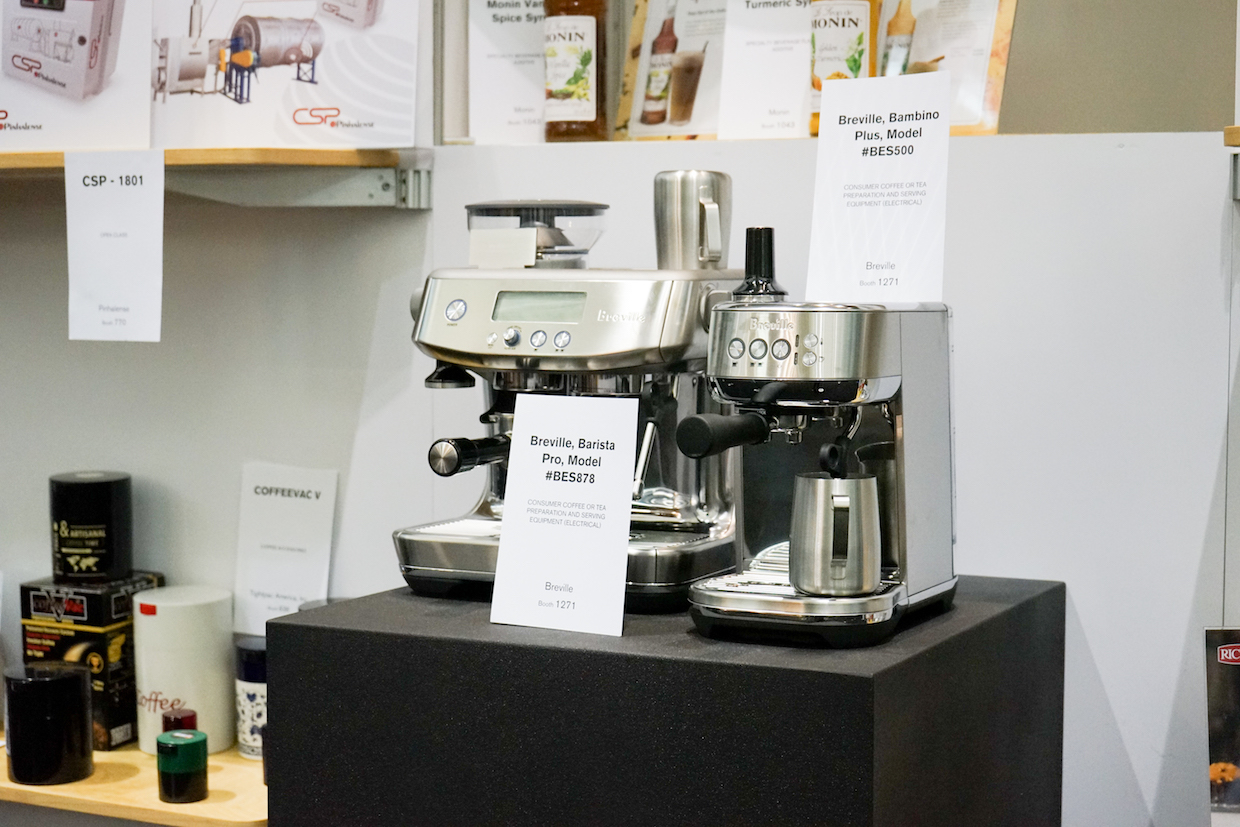 The Breville Barista Pro and Bambino Plus on display. Daily Coffee News photo by Howard Bryman.

“We want to do things that are better, faster, simpler and more engaging,” McKnight recently told Daily Coffee News. “Simplicity is one of the core values. No matter how complex the process may be to deliver that food outcome, we want to make sure that the experience that the consumer has is as simple as possible. So when we when we think about features that need to be included on a product, they need to be a feature that’s going to deliver an actual tangible benefit, as opposed to just being a feature for features’ sake.”

As simple as an individual user’s experience may be, the features spread over its espresso product line include some complex capabilities. The Breville Dual Boiler eschews a built-in grinder to save space for separate brew and steam boilers, which is a rarity among home machines. The Breville Oracle, meanwhile, automatically grinds, doses and tamps 22 grams of coffee directly into a portafilter, among other automations.

At the Specialty Coffee Expo in Boston this past April, the machine that won the award was the company’s latest, the Barista Pro. Retailing for $799.95, the machine has an integrated adjustable conical burr grinder, a 54-mm group head and a steam wand geared towards friendliness to beginners. Its shot profile includes a low-pressure pre-infusion; parameters and progress are viewable through an LCD screen interface; and its “Thermojet” boiler offers a 3-second heat-up.

When McKnight joined Breville in 2010, it had been less than five years since the company released its first espresso machine designed in-house, the Breville 800ES. McKnight had just sold his bustling specialty coffee shop, Swerve Cafe, located in the North Shore neighborhood of Sydney. 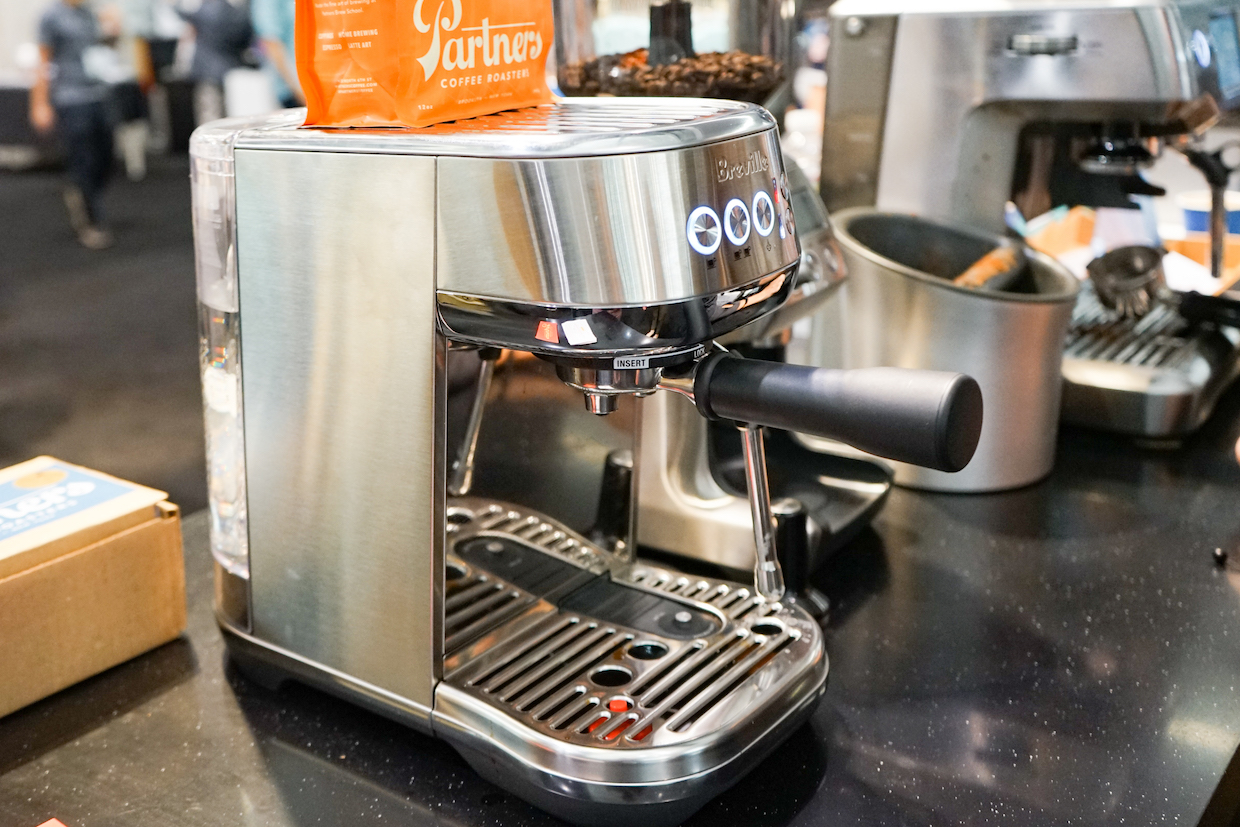 Swerve was serious about quality. Its offerings included the signature coffee blend created by 2003 World Barista Champion Paul Bassett, and at one point the shop counted two-time Australian National and 2006 World Barista Champion Scotty Callahan among its employees. In addition to being a barista himself, McKnight judged multiple barista, brewer’s cup and latte art competitions over the course of the eight years at the helm the business.

“I was quite immersed in the specialty coffee scene in Australia,” McKnight told DCN. “I started with [Breville] just basically in a role that was going to help them deliver espresso machines that produced better tasting coffee and that were easily used by consumers at home.”

McKnight said Breville does a lot of consumer research, and its research department also collaborates with five additional research agencies to pinpoint which directions to pursue, which features are working and which are not. Yet solving problems related to espresso requires the additional fluency of an specialist like McKnight.

One example is the “razor,” a leveling tool Breville has included with almost all machines since 2012.

“The coffee dose is one of the hardest things to control in the professional space, and particularly in the consumer space,” said McKnight. “The razor allows you to take out one of the variables. If you’re limited to just the grind size, dose and tamp pressure, well, we know that if you tamp between 10 kilos and 40 kilos of force you don’t vary the rate of extraction very much. Most people can tamp effectively between 10 and 40 kilos pretty intuitively without having to know too much about it. Then the razor controls the dose, so the only thing they need to adjust to get the right rate of extraction is grind size. So we’ve been allowing them to navigate that level of complexity down to just one thing.”

Here’s more from our conversation with McKnight about Breville’s approach to the home coffee equipment business.

DCN: What would be an example of a feature that Breville won’t include?

Phil McKnight: A feature that we would never implement unless there was a really tangible benefit is a “connected” product. You see a lot of scrambling in the IoT space with companies wanting to connect appliances. Unless there’s some real tangible benefit for it, there’s no point in connecting it. There’s been a couple of tea kettles which have launched as connected products, but I don’t see great benefit for an alert popping up on my smartphone that my kettle’s just boiled. Generally it’s just adjacent in the kitchen or it’s just next door. I’m not that stressed over when it’s going to be boiled.

Do you think extraction pressure and flow rate data are levels of complexity that are beyond necessary for the average consumer?

Yeah, I think that for that target consumer, that is a little confusing. I think if you’re the more engaged consumer and those things are relevant to you and you’re looking for them, we’ve got machine offerings where you can you can have that display.

So overall, you have faith that there are enough consumers out there geeky enough that you offer these things?

Yeah, I think that there’s a certain segment of the market that wants that information. I also think a certain segment of the market relates that pressure gauge to authenticity. They see that as being a link back to what is a more commercial or authentic espresso machine in their minds. Whether they understand what the pressure gauge is indicating or how they can use it is another thing, but they certainly value that because it’s giving them information or they think it’s more authentic.

If credibility is a concern, why not do a big, chromed-out E61? Breville machines are decidedly consumer oriented, yet at the same price point other companies make big, heavy boxes that look and feel commercial. Why does Breville not do that?

I’ve got to say that there are some really great machines in that space. But the shiny Italian box is not something that fits within Breville’s design language. We want to make sure that everything that we produce, first of all, functions properly, but it also needs to look equally at home on your countertop. It would be nice if you had a Breville espresso machine that matched a Breville grinder and a toaster oven and a Breville kettle, it’s that whole coordinated cohesive look. It’s more about the about the brand I.D., the design language piece.

Are there certain machines that sell better in certain regions, between espresso and drip brewers? If so, why do you think that is?

I reckon [the ratio of drip to espresso machines sold in the U.S.] is probably around two to one, is what we experience with a comparable price point. Whether that’s indicative of the entire market I don’t know, but that’s our experience. That’s definitely narrowed, but in Australia it hasn’t narrowed at all. The gap is still a chasm. Drip filter coffee in Australia is basically non-existent.

I just think it’s just a fascinating organic product that’s continuing to evolve, and every day is just a new day with coffee. You know you can experience one taste profile one day and you can experience something totally different the next. It’s incredibly diverse.

If I wasn’t in coffee? A life without coffee? It’s been such a large part of my life, it’s very difficult to think of anything I would be doing if I wasn’t involved in it. Maybe laying on a beach. Riding a bicycle, something like that.