The Extraction Burns Fat, or Maybe That’s a Fibbee 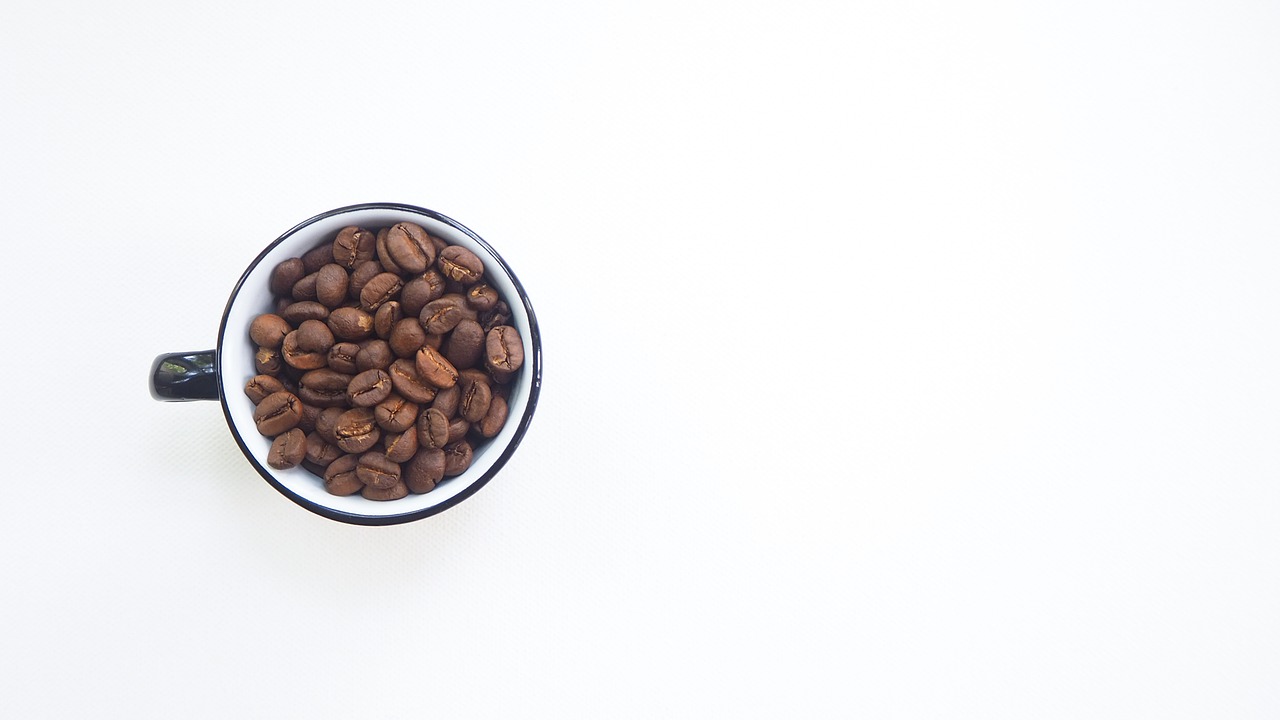 Setting the internet abuzz this week was a new bit of coffee-and-health research published by Nature’s Scientific Reports showing that brown adipose tissue — a.k.a. “brown fat” — function is stimulated by caffeine. Apparently that means coffee is potentially helpful in managing body weight and battling obesity and diabetes. CNN caught up with University of Nottingham School of Medicine Professor Michael Symonds, a co-director of the study, to learn more:

The study only involved nine people and the research is still at a very early stage. Scientists say they still need to determine what it is exactly about coffee that busts fat.

“The results were positive and we now need to ascertain that caffeine as one of the ingredients in the coffee is acting as the stimulus or if there’s another component helping with the activation of brown fat,” Symonds said.

“Once we have confirmed which component is responsible for this, it could potentially be used as part of a weight-management regime or as part of glucose regulation program to help prevent diabetes.” 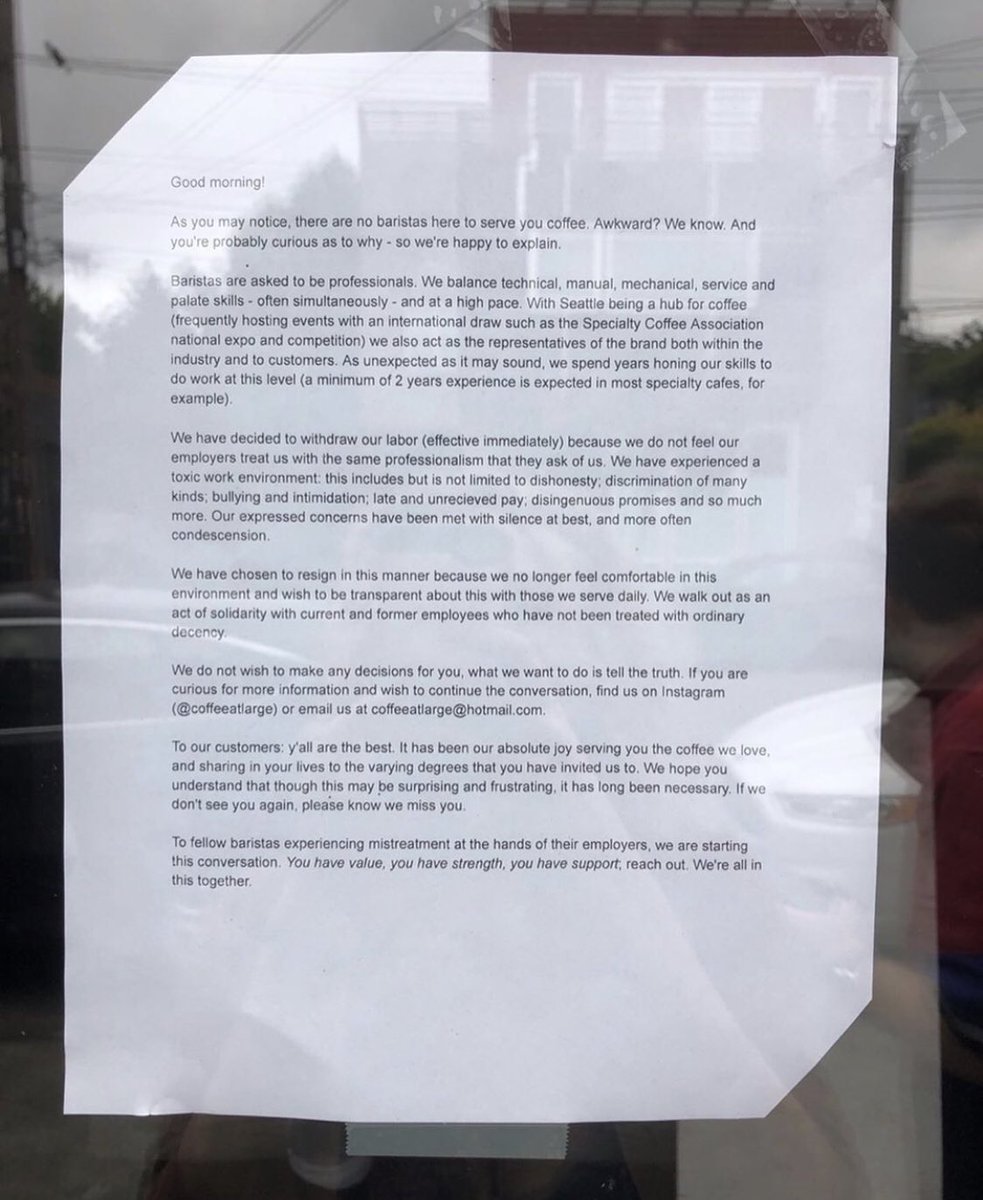 The letter posted by Slate baristas during the walkout.

Matters have gotten decidedly heavy for Slate Coffee Roasters in Seattle, where multiple employees of the company’s Ballard location have staged a public walkout, citing missed paychecks, poor communication and a “hostile” workplace. The workers posted a letter to customers in the window of the cafe and formed a new barista solidarity group on Instagram called Coffee At Large. After the news initially broke on neighborhood blog My Ballard, the story was picked up by Eater Seattle, including an Instagram response from Slate’s owners:

We intend to work through and understand the details and concerns made by our former employees and do not take the matter lightly. It is our intention to hold space for a thoughtful dialogue.

Though it should be a given that The National Coffee Association (NCA) is in favor of promoting sustainable livelihoods for coffee farmers, the organization has at last partnered with Conservation International to assist with the Sustainable Coffee Challenge initiative, launched in 2015. NCA President and CEO William (Bill) Murray is joining the Sustainable Coffee Challenge Advisory Council, according to a joint press release this week:

As the voice of the coffee industry in the United States, NCA will act as a conduit between more than 300 NCA members and the Sustainable Coffee Challenge, helping to drive deeper engagement between industry and the Challenge. NCA will use its voice to amplify the Challenge’s progress in helping coffee farmers thrive while protecting natural resources, combating climate change, and making coffee communities more resilient. NCA will also help share with its members some of the many sustainability resources created by the Sustainable Coffee Challenge. 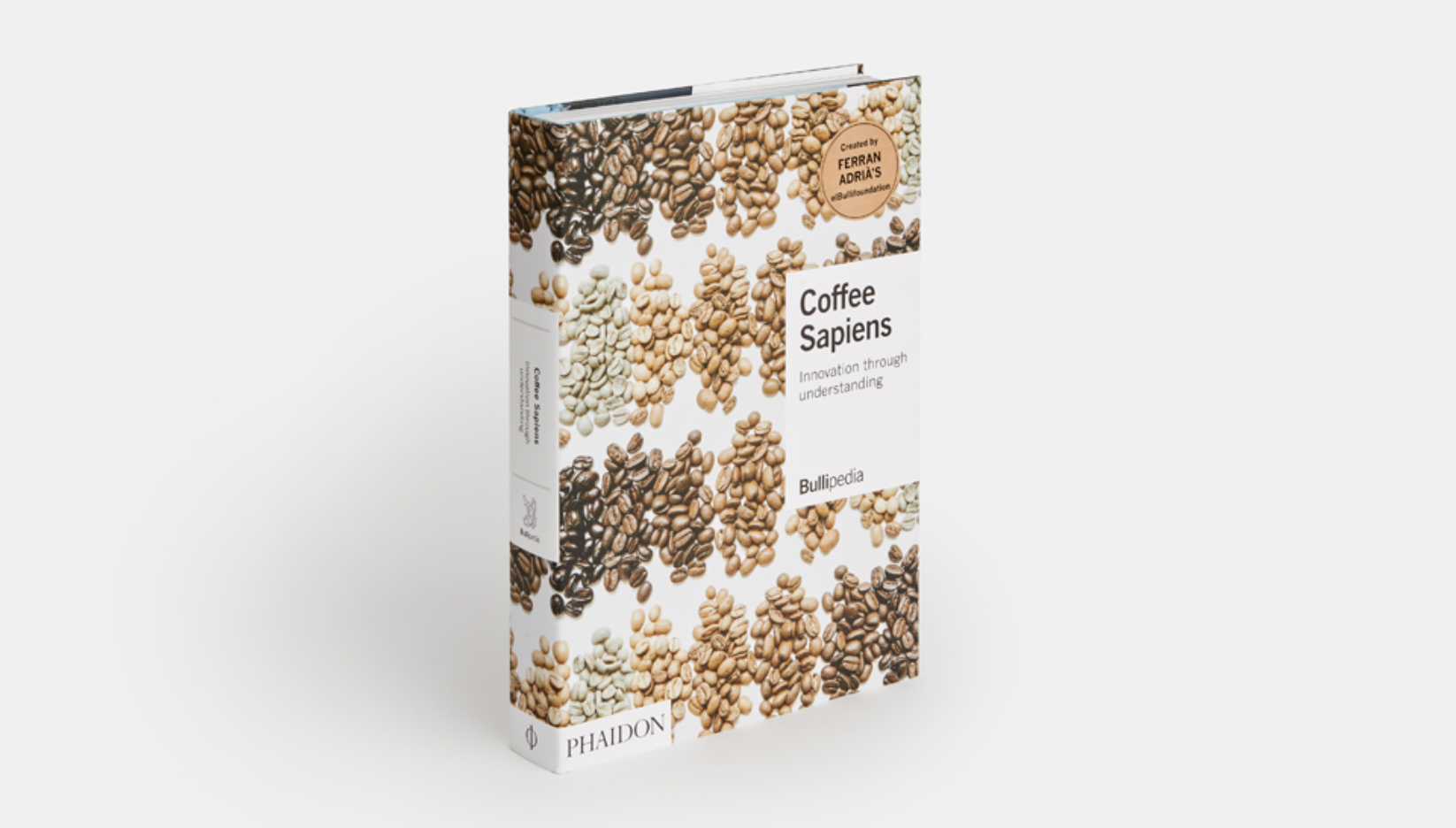 Indian daily newspaper The Hindu sat down with Spanish author and chef Ferran Adria to discuss his new book Coffee Sapiens and his take on incorporating fine coffee into the fine dining experience after having worked with Lavazza for about 20 years:

This is a really interesting question as it summarises not only my focus when it comes to cooking with coffee, but actually my whole way of understanding cuisine: certainly to respect the best qualities of each product and — at the same time — be able to modify some of its characteristics, so that the dining guests can try something that is completely new, yet evoking well-known flavours. 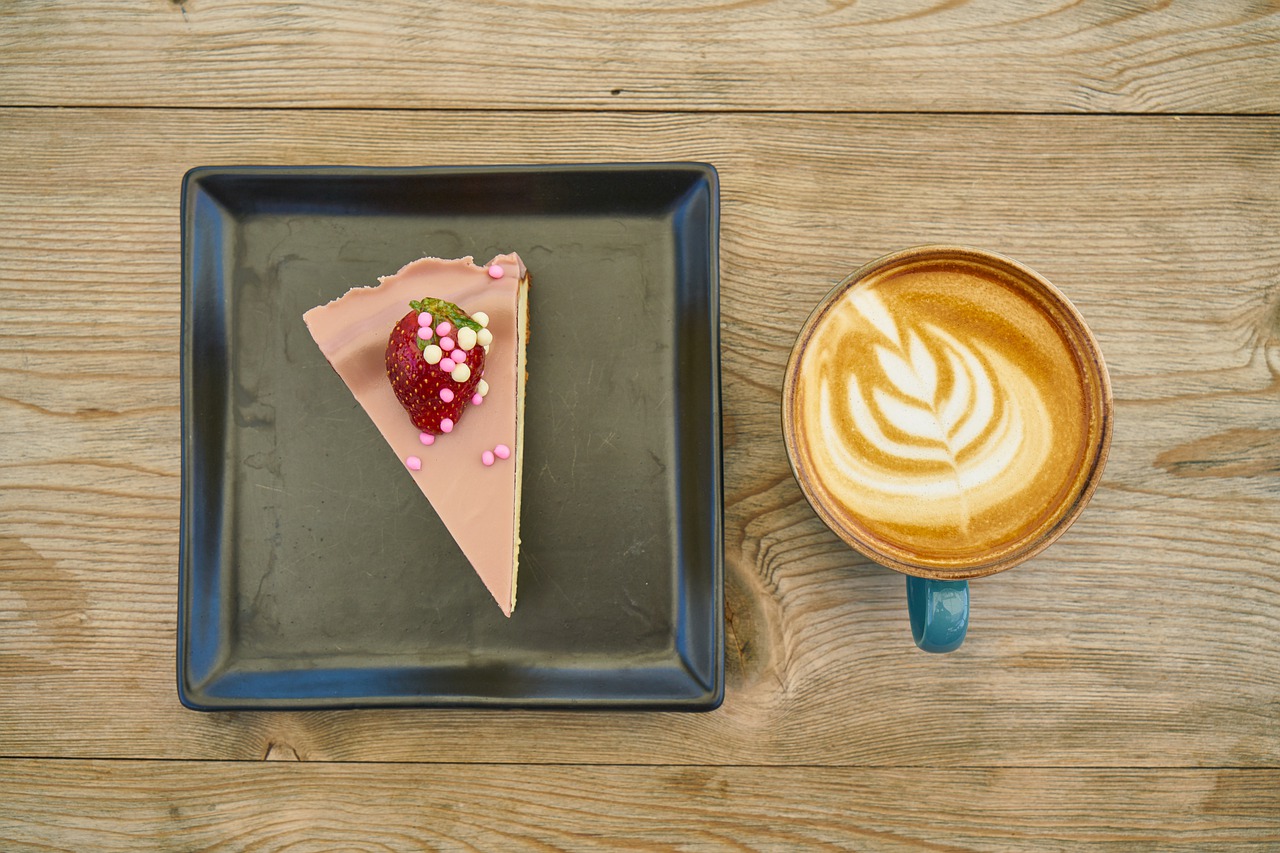 Another book, The Latte Factor by David Bach, stems from the author’s accusation-gone-viral that millennials spend more on coffee and other trivialities than on saving for a house or retirement. It’s a simplistic condescension upon both coffee and millennials, as widely debunked as it is repeated. Economist Elise Gould told Vice that the pop financial theory is not only incomplete, but ignorant of deeper-seated economic injustices that keep people poor:

“I think there’s a much better understanding of inequality in this country than there used to be,” said Gould, the economist. “The gaps in wealth and income, and wages between haves and have-nots. People realize it’s not just about a latte—it’s about a pie, and how it’s being divvied up.”

But enough about books. Let’s talk about people. Kenyan independent newspaper Daily Nation profiled 34-year-old “coffee technologist” Chuaga Kinuthia, who doesn’t smoke or drink alcohol in order to preserve his palate for his work at the Dedan Kimathi University of Technology Institute of Food Bio-Resources:

“One must avoid foods with very strong flavours, drinks with very high alcohol content or anything that can alter the taste buds,” he cautions

The importance of slurping coffee is to measure its oiliness, sweetness, acidity, flavour and the after-taste.

“This is one of the well-paying jobs because we have very few coffee tasters,” says the professional cupper, who has been certified by the Coffee Directorate of Kenya and the Coffee Quality Institute of America as a “Q grader”.

Greek World Reporter aimed its spotlight at Dimitrios Christopoulos, “the only known Greek coffee producer in the world,” who immigrated to Colombia and now owns a coffee farm in the Huila region called Finca El Diamante. For Christopoulos, like any other producer, the price crash is taking a toll:

“Multinational companies are striving to buy the product at very low prices and sell high… They want Colombians to remain slaves because some want to make lots of money,” he says.

Christopoulos is helping to organize coffee producers into a co-op, which will then export their product directly into foreign markets, instead of using multinational companies and middlemen. “Our motto here, is: strength in union,” the Greek immigrant says.

Inventor Glen Poss sat down with The Spoon to discuss his automated Aria Coffee Roaster, which has been in development for 20 years and has a few more to go. The ventless electric shop roaster will come in “1-cell” for consumers or “4-cell” for commercial settings, pull up four recommended profiles upon scanning each coffee pack’s RFID chip, plus 100 other profiles, or the option to void the warranty by crafting profiles manually. The Spoon’s Garrett Oden had the story:

“Roasting facilities cost a lot of money, labor, and time. Then you have to ship out the beans everywhere,” Glen said. “With our tech, whether it’s in cafes, restaurants, or at home, you don’t need to raise any money or get permits. That’s how we disrupt coffee: we decentralize it.” 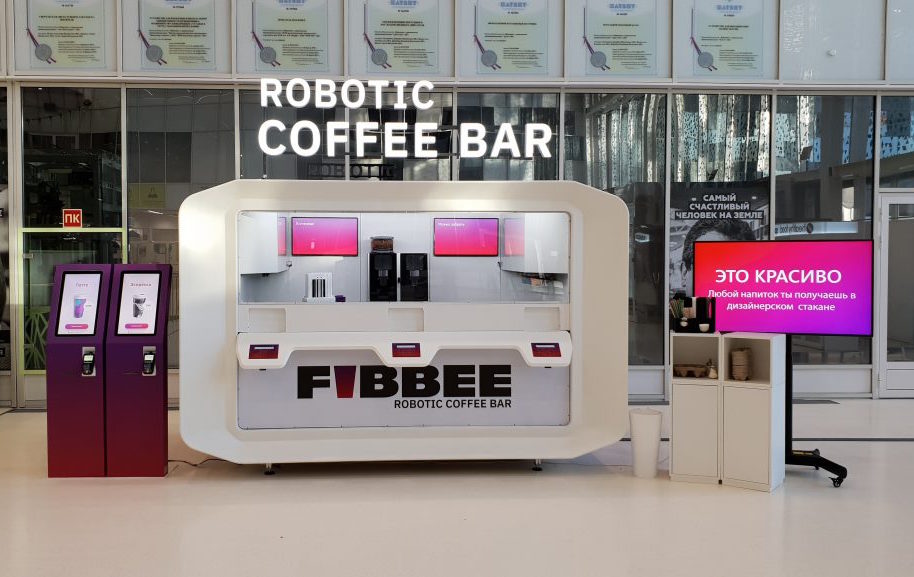 The Spoon also examined the spread of robotic baristas in Russia. There’s the MontyCafe system that launched last year, and now there’s Fibbee, a “female entity” barista-bot whose makers hope to establish a dozen retail coffee locations in Moscow by the end of this year:

Moscow-based Foodtronics has created FIBBEE, a robot barista that serves up all manner of lattes and other coffee drinks. Like Briggo and Cafe X here in the U.S., FIBBEE is an automated kiosk that can be set up in high-traffic areas, and like those American counterparts, the number of FIBBEE locations is expanding.