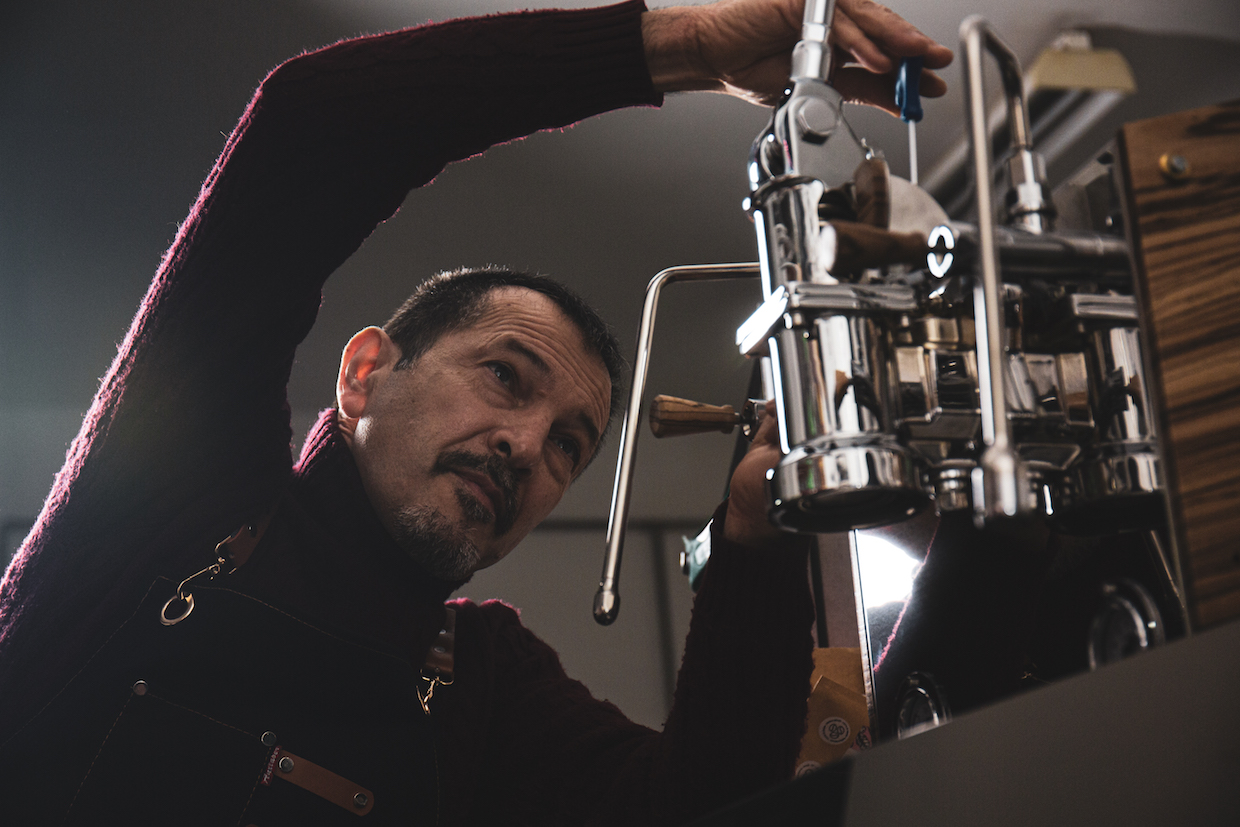 Upscale Italian espresso equipment company Nurri is preparing the international launch of its first products, including a tool for distributing coffee grounds in espresso tampers through the use of vibration.

Proudly based in Naples and named after founder and chief product designer Antonio Nurri, the high-end prosumer brand is also bringing to market two espresso machines that combine standard technologies with new ones, plus a Barista Multiple Station (BMS), which includes the vibration distribution tool, known as VDT, and scales for weighing portafilter doses and tamping pressure. 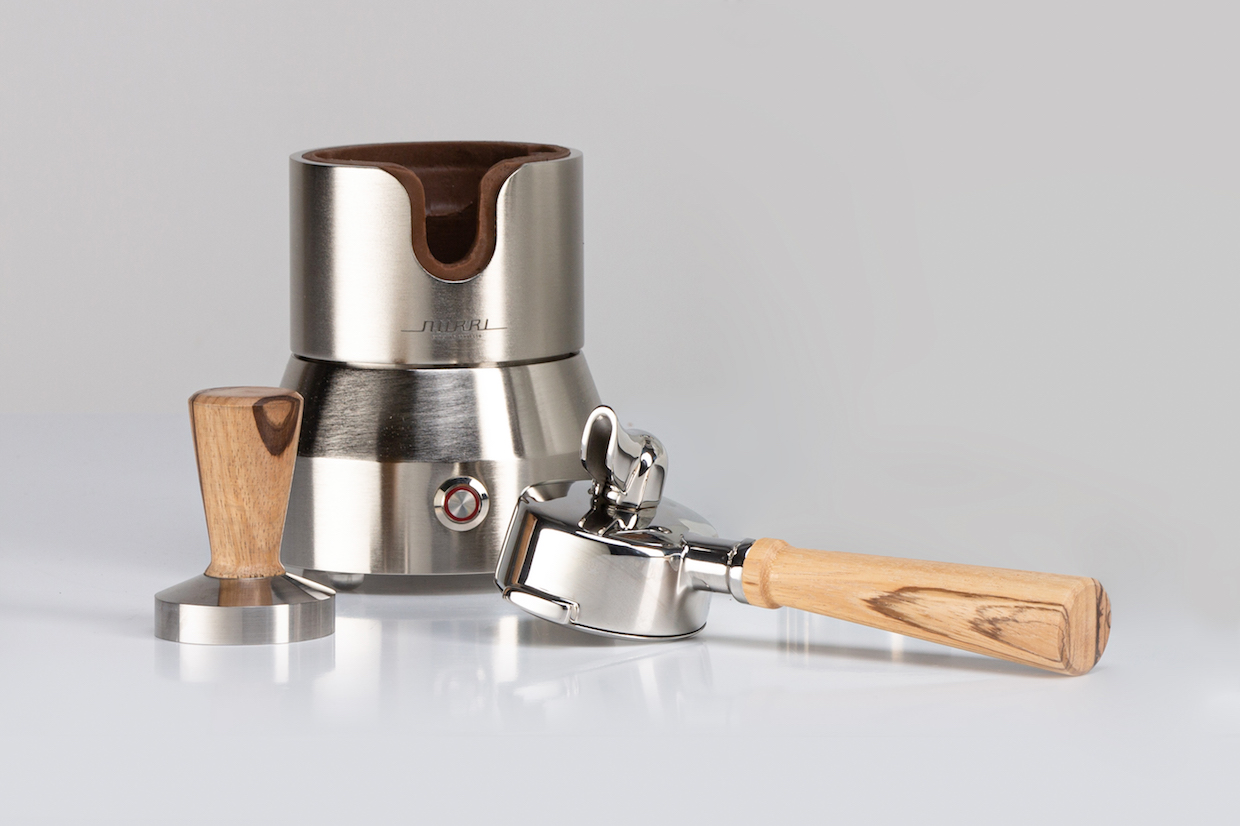 The vibration distribution tool with a silver finish.

Available also as a standalone device, the vibration distribution tool is operated with the push of a button that sends vibrations through the portafilter basket.

The vibration first causes the pile of grounds to flatten while breaking up clumps, then finer particles will eventually settle towards the bottom the basket, according to the company, which suggests such stratification of grounds will affect extraction and flavor, opening new doors for barista experimentation. 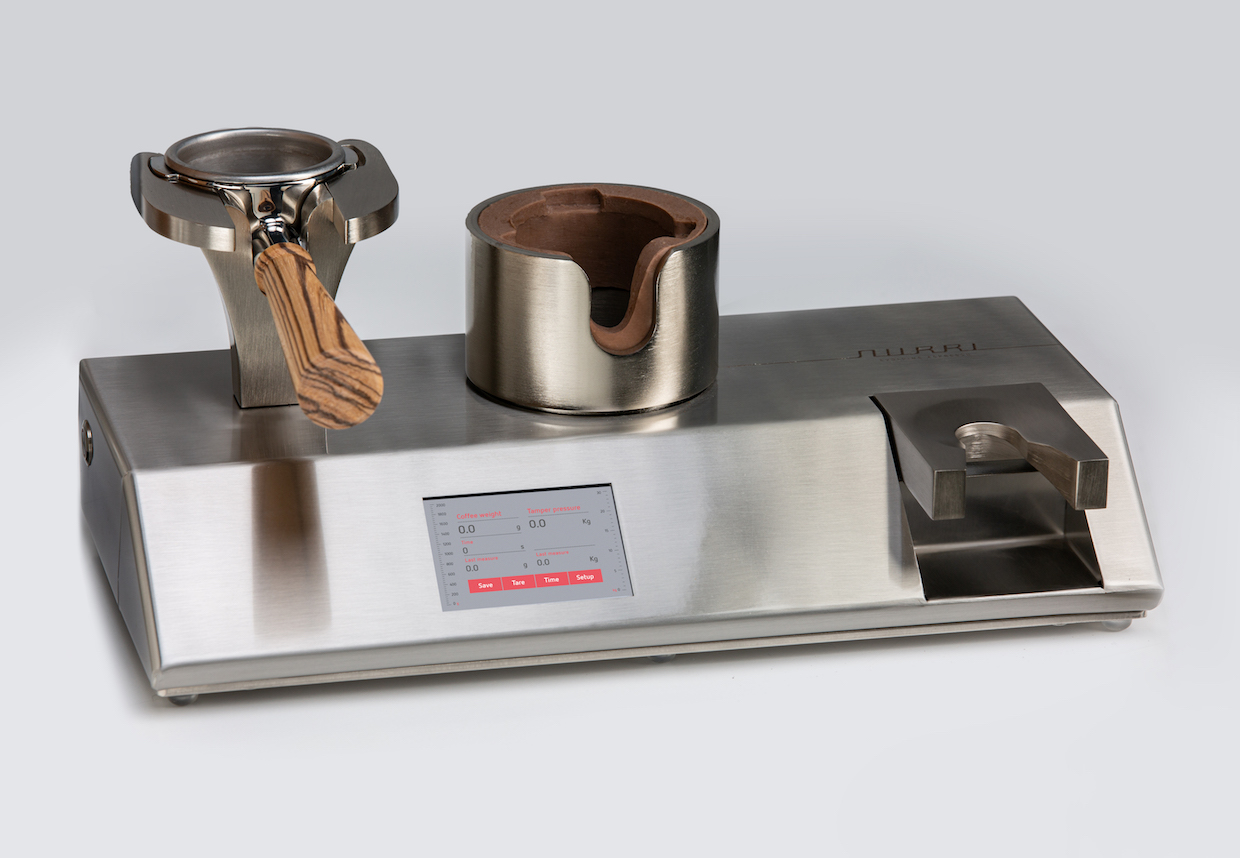 The Barista Multiple Station (BMS) with the vibration tool and built-in scales.

The two espresso machines under the Nurri name are the manual lever Nurri Leva S.A., and its semi-automatic sibling the Nurri GTO. Both machines feature innovative manual interventions at the group.

Building upon the platform of a traditional spring-lever group head system, the Leva S.A. includes a pair of paddles on either side of the group. One opens a valve to relieve the pressure applied by the spring-driven piston in cases where a poorly-dialed shot runs too slowly, or simply to reduce the amount of time resetting from one shot to the next. The other controls water driven in by a built-in electric rotary pump for preinfusion or flushing the group. 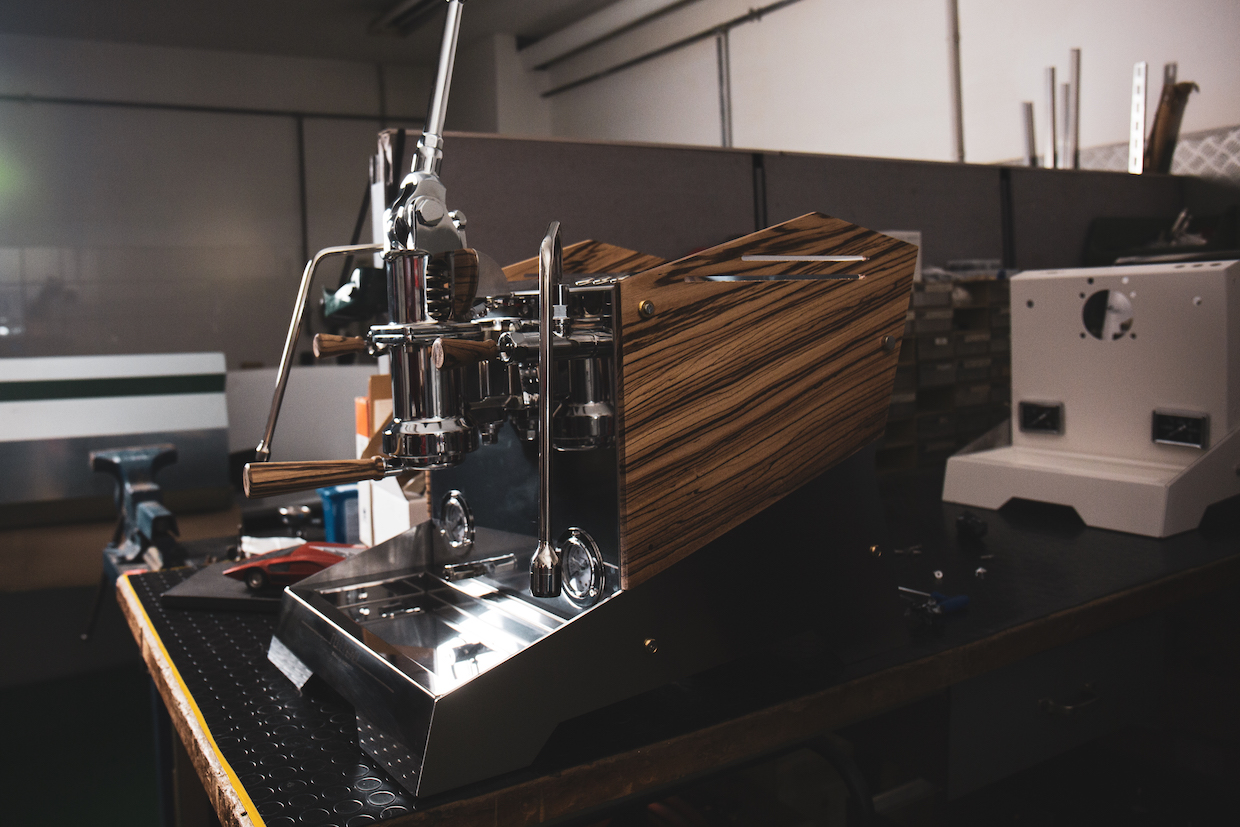 The GTO, which recalls its inventor’s love of classic Italian car culture, is a temperature-stable stainless steel dual boiler machine with a saturated group head. A manual pressure profiling knob designed explicitly to be “fun to drive” is mounted on the right-hand side of a case that leans slightly forward. 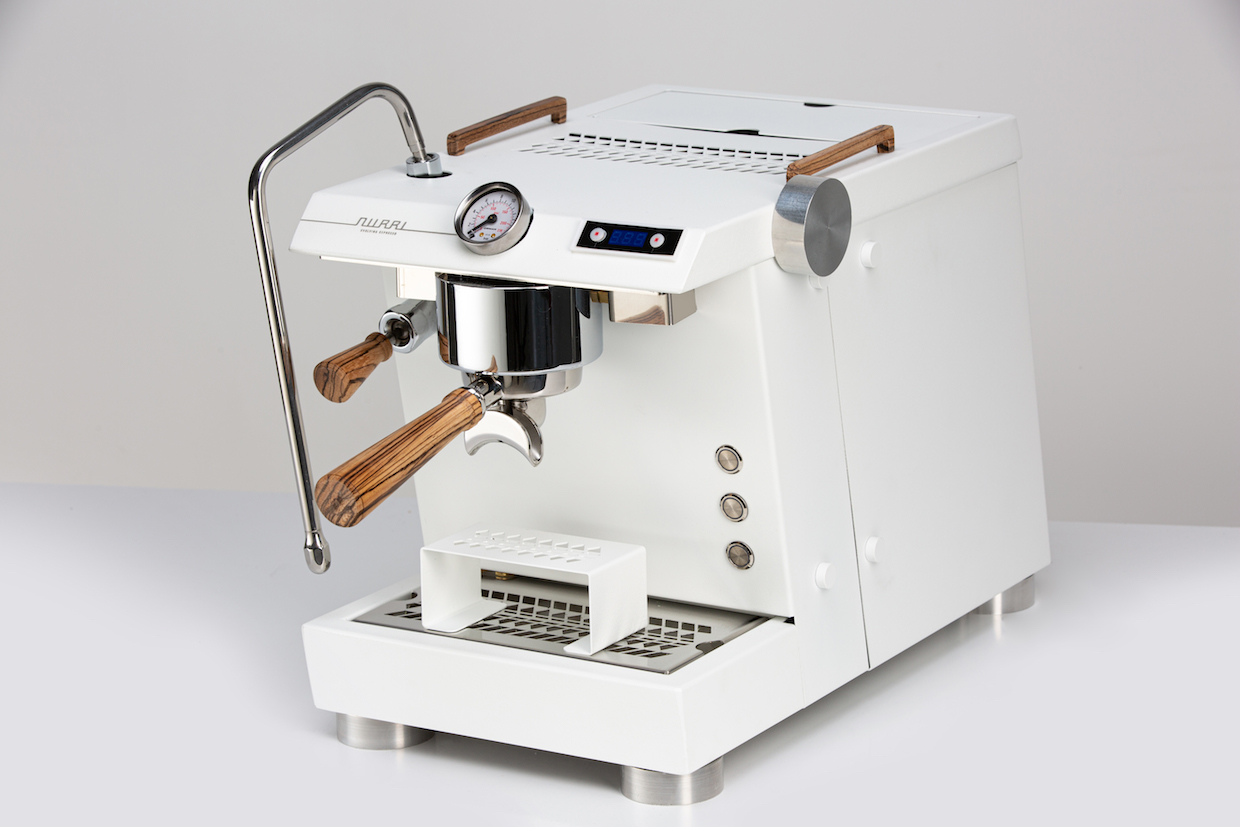 “The body shape gives to the GTO a forward movement, a sort of ‘ready to go’ feeling,” Antonio Nurri told Daily Coffee News. “Having grown up like any good ’60s Italian boy, each day started with a caffe latte and bread and, in my case, a great passion for cars… I must admit that cars designer would have been my perfect job, but life had other plans for me.”

A student of foreign languages, philosophy and psychology, Nurri’s initial employment after university was as the export manager for a coffee roasting company. Espresso machine design then became the exhaust valve, so to speak, for his passion for classic cars, as reflected in the GTO. 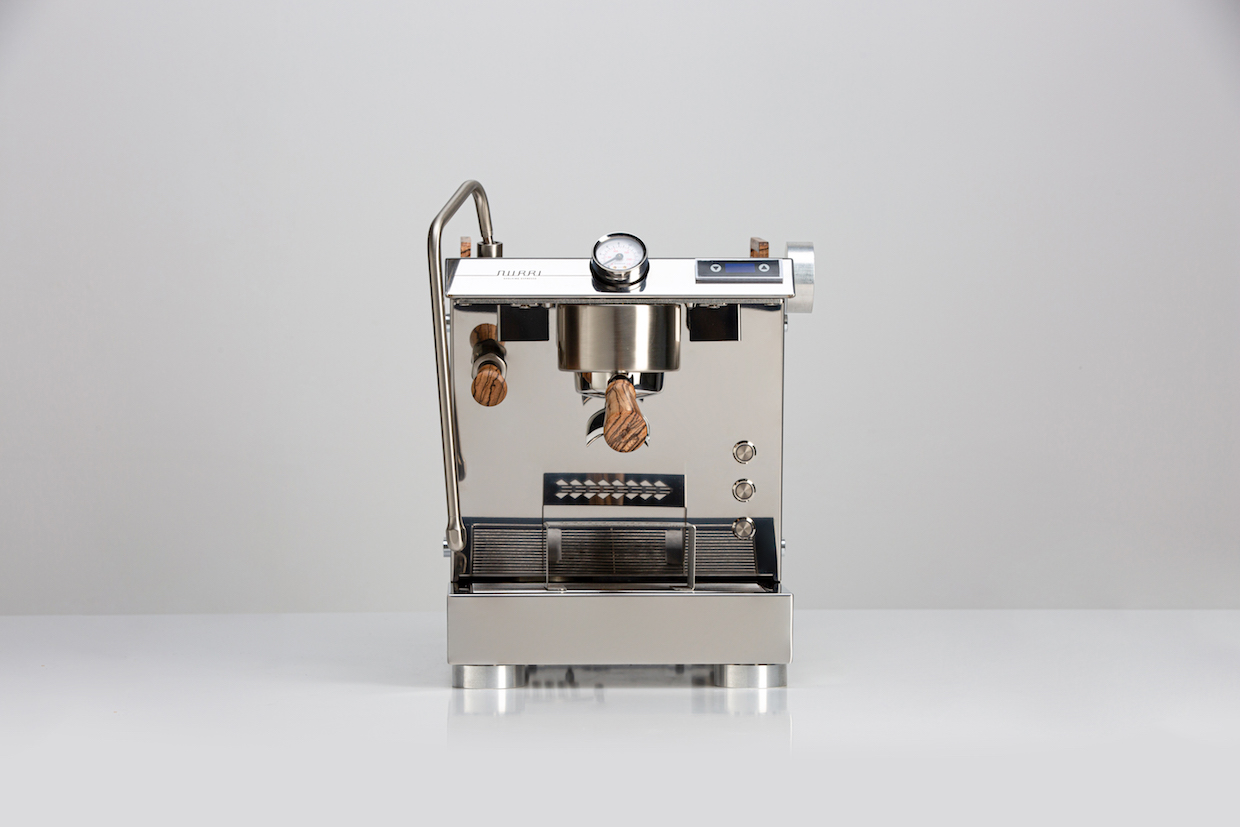 That passion will also be conveyed in an upcoming compact heat-exchanger machine called the Isetta, whose name, small footprint and paddle actuator are inspired by the microcar originally designed in Italy and then manufactured by BMW in the 1950s and ’60s.

“In coffee I found a new and fascinating world of rich aromas,” said Nurri. “The opportunity to share my passion for coffee with cultures around the world has been immensely gratifying.” 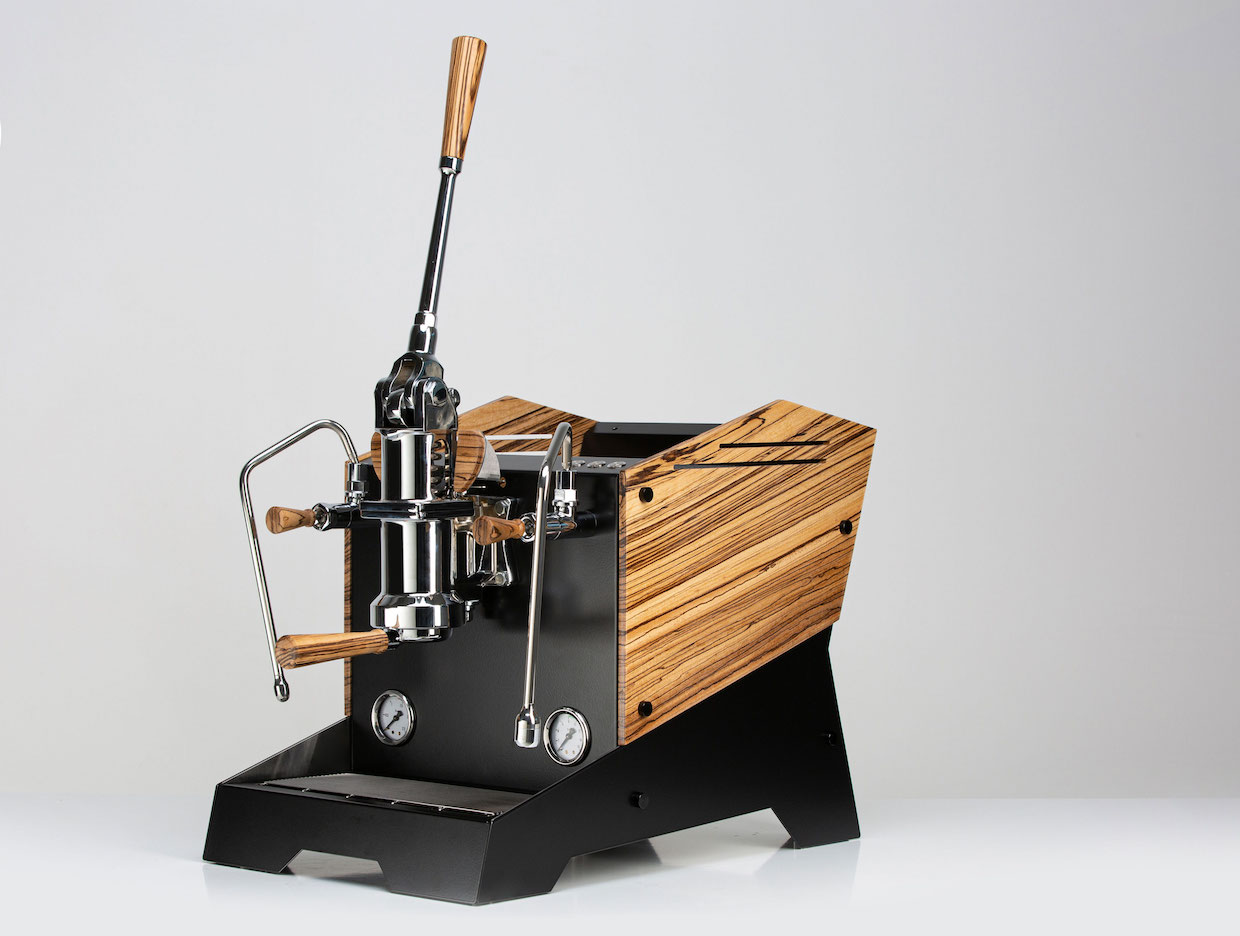 Nurri is also a coffee roasting company, offering several signature blends and occasional single-origin coffees. Antonio Nurri roasts his darker and Robusta-inclusive Neapolitan blends on a 120-kilo-capacity Trabattoni roaster while reserving the drum of a 15-kilo Giesen roaster strictly for specialty-grade arabica coffees treated with a more delicate approach. In either case, balance and smoothness are the goals.

“Just recently a good German customer of mine called to tell me [Nurri coffee was] his first great experience drinking an espresso with 50% of Robusta in it and not feeling astringency and bitterness,” said Nurri. “That is music to my ears.” 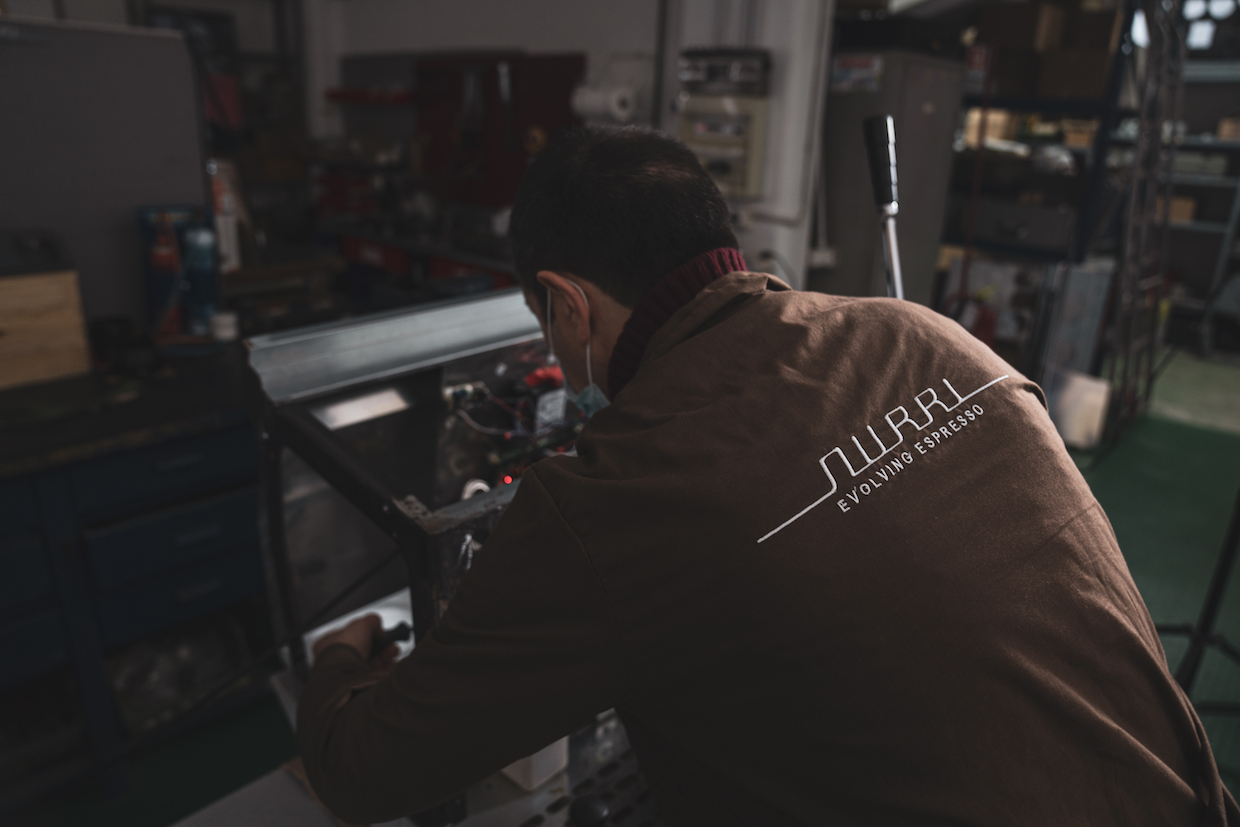 Prices for the GTO and Leva S.A. are expected to be announced with an international launch planned for next month that will include 110-volt versions for U.S. customers.

Two and three-group multi-boiler machines for commercial use are slated for release later this year, after which time Nurri plans to turn his attention to coffee grinders.