Thousands of Colombian coffee farmers have gone on strike beginning Sunday, taking to the streets of Bogotá and demanding government support for an industry that has suffered from two years straight of price drops. 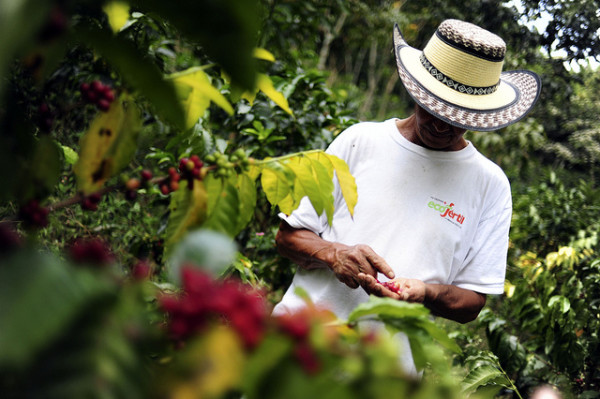 In a televised speech, Colombian President Juan Manuel Santos criticized the strike as being “unfair, inconvenient and unnecessary,” while suggesting that government subsidies for Colombia’s coffee industry have outpaced those provided by other coffee-producing countries. He said on a monthly basis, aid amounts to approximately $1.65 million.

But that’s not enough, according to the strike’s organizers. “[Farmers] are paid $282 for a sack of coffee but the cost of producing it is $366. These are small farmers. They are poor. The culture of coffee growing is important to Colombia but we cannot continue like this,” Victor Correa, a strike organizer, told Colombia Reports in January, adding that the situation is “an economic crisis, a social crisis, an institutional crisis and a crisis of production.”

Here’s a description of the long-term arabica picture that has been drastically affecting the livelihoods of farms and farmers throughout Colombia from Financial Times:

Arabica prices have plunged in the past 18 months and are fluctuating around $1.40 per pound. That compares with the unusually high 2011 average of about $2.55 a pound, and $1.76 a pound last year.

“All of us coffee growers would like to live in an ideal world with sustainable prices,” said Luis Genaro Muñoz, general manager of the Colombian Coffee Growers Federation, which represents some 500,000 coffee farming families.

The strike shows that Colombian producers, who often set trends for the wider industry in Latin America, are struggling even if prices remain much higher than in previous downturns. Arabica coffee prices have fallen 55 per cent from a 30-year peak in 2011 of more than $3 a pound, but remain well above the low of $0.50 set in 2002. Higher production costs are a further problem.

The government, meanwhile, is greeting the strike, which reportedly has been powered by some 30,000 farmers, with  force, today sending 1,500 police to the scene. Here’s more from UPI.com:

National Police in Colombia said 15,000 policemen are reporting to duty to maintain order as an estimated 30,000 coffee growers staged demonstrations.

Confrontations with protesters resulted in 21 injuries, none of which were considered life-threatening, and reports indicate that most of the protests have been peaceful, Colombia Reports said.

Hi to all, the contents present at this web page are truly remarkable for
people knowledge, well, keep up the nice work fellows.