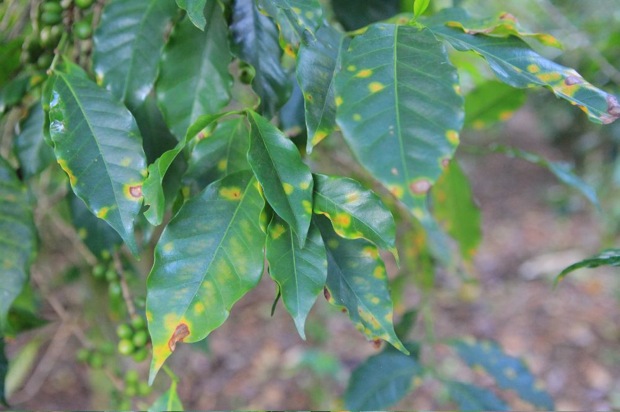 CRS is collecting data from smallholder farmers in Central America on the impacts of coffee rust. So far we have gathered information from 13 cooperatives with more than 6,800 members. I presented some of the preliminary results yesterday at the coffee rust summit here in Guatemala.  They were not encouraging:

This news is bad. But the prospects for next year may be even worse.

One of the cooperative leaders we interviewed in El Salvador told us: “The crisis is in 2014.”

Our data show that cooperatives believe their production will fall even further next year, by as much as 56 percent.  That figure includes both losses to coffee rust and the coffee that farmers will voluntarily take out of production over the short term to restore productivity over the medium term through pruning and renovation.

But the negative impacts of coffee rust aren’t just felt on the farm.

With less coffee to harvest, farmers hire fewer people to pick coffee — historically a reliable source of employment for countless thousands of seasonal workers, many of them migrant laborers from areas outside the coffeelands.  Experts here estimate that demand for seasonal labor in the coffee sector could be down as much as 30-40 percent next year, and that permanent jobs could be eliminated if the pessimistic projections for production hold.

With limited sources of income beyond coffee for farmers and jobs in the coffee sector drying up, production of food for household consumption assumes added importance.  Fortunately, 2012 harvests were strong and the outlook for 2013 is positive, so far.