A New Mexico coffee shop is leading a local charge to develop “bike-in” zoning, commercial zoning that accommodates bicycle and pedestrian traffic, while not allowing cars. 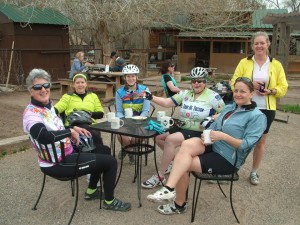 Owned by Larry Tonning, Bike In Coffee opened in Albuquerque last September on the private property of Old Town Farm, an urban agriculture and event venue that describes itself as “The Green Heart of the City.” The coffee shop was created with cyclists and pedestrians in mind, with available zoning and space preventing car parking, and “because we live on a small street and don’t want to burden others with traffic,” Tonning recently told local KOB4 in a profile of the business.

The cafe is now helping lead the charge in ABQ for more bike-in zoning. A petition that has collected more than 200 signatures (as of this writing) has been circulating online, and it aims to dispel some concerns that have been voiced regarding whether the bike-in zoning would affect public property. Here’s some of the petition:

Picture this: You’re riding down the bike path away from the frenzied traffic and enjoying the great outdoors. But this isn’t a recreational ride. You’re conducting everyday business…crossing errands off your list, doing many of the things you’ve traditionally done in your car…on your bike.

Along the trail you stop in at a farm shop, buy vegetables and jam and put them in one of your three baskets. Further down the path, you buy candy and flowers from a path-side vendor. Up ahead there’s a book store and a bike shop. And, fortunately, there’s an ATM. you can get the cash you need to meet friends at that great coffee shop for bikes only.

The idea is simple – Bike In Zoning is exclusively dedicated to bicycle and pedestrian customers.

There is virtually no end to the private enterprise possibilities designed to serve bike traffic only. And It’s not a dream for the future. With innovative Bike In Zoning, it can happen now, on private property along existing trails.