Sanremo UK Unveils the Opera at Host 2013 in Milan 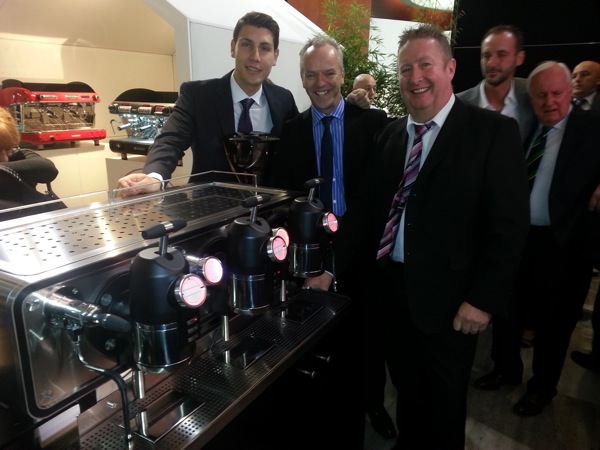 Oct. 23, 2013 — It’s full steam ahead for Sanremo UK as they unveil the revolutionary new Opera machine, one of five new models Sanremo uncovered this weekend at the Host 2013 in Milan – one of the world’s leading hospitality trade shows.

John Gordon, Square Mile Coffee Operations Manager and multiple UK Barista Champion, said just before the launch: “Espresso will never be the same after Host 2013”, and visitors were soon queuing up to see what he meant.
Although the model unveiled at the show is just an advanced prototype, Sanremo expect the Opera to be in full production in 2014. There is already a growing waiting list.

Other models featured at the show included Verona RS, two new models of Torino, Zoe compact and the final version of the Verde, the green machine. Some models, like Zoe compact are in full production in November, with other models following shortly.

Andrew Tucker, managing director of Sanremo UK, said: “The show has been amazing for Sanremo. We have never been so inundated with visitors. Interest in the new Opera machine has been astounding.

“This machine is different.  All other coffee machines work on volumetric measurement.  The Opera controls coffee extraction by brew ratio.

Angus McKenzie, Managing Director of Kimbo UK, said: “The Opera is a model of game-changing genius underpinned by the strong Sanremo DNA and its pursuit of Italian espresso excellence.”

It will probably be quite expensive but if you want the best coffee it’s worth it!

This looks so luxurious, if the coffee tastes as good as the machine looks, it’s definitely a winner!