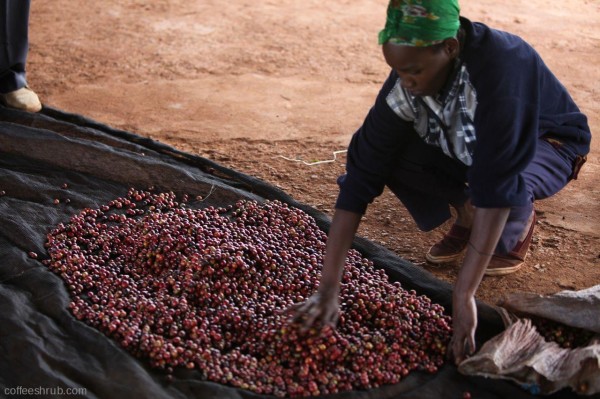 sorting coffee cherries in the Tegu factory. Photo by the Coffee Shub (coffeeshrub.com)

A government-led move to centralize coffee processing, marketing and sales in the Nyeri county of Kenya has some specialty coffee professionals concerned about quality and traceability, while smallholder farmers and processors locally are fighting for their livelihoods. County officials, meanwhile, say the pooling of coffees at a central mill will allow for oversight and fair prices for all involved.

At least 13 cooperatives have filed suit in the Nyeri County High Court, seeking an injunction against the Nyeri County Government and the Coffee Board of Kenya, which have vowed to move forward with a plan to centralize coffee processing at a single mill known as Sagana, as well as take over marketing and selling the green coffees. Meanwhile, the county government is in the process of shutting down the Central Kenya Coffee Mill, which reportedly processes more than 50 percent of the coffee produced in Nyeri, largely from smallholders.

Nyeri’s specialty-grade coffees have an impeccable reputation, one that has some say has been built by a kind of anti-centralization model. Independent coffee societies (cooperatives) tend to provide organizational support a handful of individual factories (wet mills) aligned with them, allowing for traceability to the society or even down to the mill. This structure has benefitted farmers by allowing for premiums associated with high-minded roasters and buyers like Tim Wendelboe, The Coffee Collective, Coffee Shrub, and James Hoffmann’s Square Mile (we first heard of the situation in Nyeri from James Hoffmann’s must-read blog. See why he is worried about centralization in Nyeri here.)

Nyeri County Governor Nderitu Gachagua informed farm organizations of the centralization plan in October, maintaining that government oversight of local coffee production will increase prices for all farmers by protecting them from cartels. “By milling their coffee together, farmers will free themselves from cartels which have millers who come to take coffee, go process it and months later come to tell farmers how many kilos of coffee parchments were realized,” Gachagua said at a public appearance at the Sagana mill last week, according to a Daily Nation report.

The hearing for the dissenting farm groups is scheduled for February 10. Meanwhile, farmers are already harvesting and the Sagana mill is seeing increased deliveries.