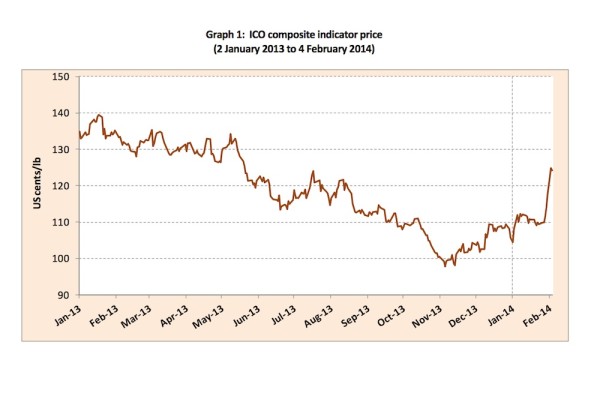 Graph courtesy of the ICO

After months of downward movement, global coffee prices took a sharp upward spike at the end of January, following news that dry weather in Brazil could drastically hurt the country’s output this year.

The International Coffee Organization‘s composite indicator price — which measures the value of commodity coffees from all the world’s main coffee producing regions on the London and New York exchanges — was up to 117.56 US cents per pound by the end of January, its highest level in four months.

The price jump follows official news from the Brazilian government agency Conab that last month’s dry weather is expected to cause significant production decreases in what had originally been expected to be a bumper crop in 2014/15 for the world’s largest coffee producer.

The Brazil harvest begins in April, and the government is now estimating that some 46.53 and 50.15 million bags will come out of the country in 2014/15. “If realized, this average would represent two consecutive decreases in Brazilian coffee production for the first time since 1977, and would suggest that the significance of the traditional biennial cycle of production is waning,” the ICO said in its monthly report.

The uncertainty in Brazil is spelling some relief for other producers throughout the world who have been suffering in recent months from continuous drops in coffee prices due to huge stockpiles. For its part, the ICO doesn’t attribute all of Brazil’s expected losses to bad weather, suggesting that greater market forces have played a part. “The expected decrease is attributed to a reduction in the area of production, as well as lower levels of crop investment caused by falling coffee price,” the ICO said.