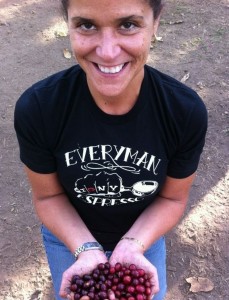 Fifth-generation Salvadoran producer Aida Batlle has been named in the fourth annual 2014 Good 100 list of worldwide leaders in “global citizenship,” shedding some light for mainstream audiences on the farmer/roaster/consumer relationship.

The Good Magazine list is designed to celebrate individuals who are creating positive change on any number of fronts — from urban agriculture to gender equity to technology solutions — that relate to the concept of global citizen. She stands alongside an extraordinary roster of creatives, visionaries, educators, techies and other do-really-gooders.

Batlle, who was just elected on to the SCAA 2014-15 Board of Directors, owns four farms all along the Santa Ana volcano in the Western part of El Salvador: Finca Kilimanjaro, Finca Los Alpes, Finca Mauritania and Finca Tanzania. She maintains relationships with some of the most respected buyers in the specialty coffee industry — former clients include the likes of Counter Culture, Sweet Maria’s and Stumptown — and takes a notoriously hands-on approach at all her farms. Battle and her coffees are also no stranger to awards, having earned multiple Cup of Excellence and Good Food Awards honors.

Aida’s involvement with her farms remains totally committed and intimate. When she walks through them, she constantly darts into a patch of trees to prune loose limbs with her machete or rolls up her sleeves and dives into the cherry sorting at the end of the afternoon to help her workers with the tedious task at hand. Aida calls her farms her babies.