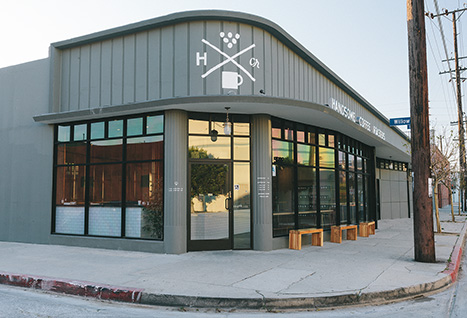 Founded by Intelligentsia alums Michael Phillips, Chris Owens and Tyler Wells three years ago, Handsome has built a solid reputation in the specialty coffee world with a focus on sourcing high-quality coffees for sale online and in its industrial-chic roastery and cafe, which has represented a pioneering force in the coffee-centric revitalization of the Los Angeles downtown arts district. Wells and Owens have since left Handsome to focus on other projects.

Eater L.A., which broke the news of the Handsome deal today, says the Handsome brand will “probably get the ax:”

The details of the acquisition are still under wraps, but it’s a rather sad ending for Handsome, which built up a cult following and relatively widespread wholesale network.

In an announcement this afternoon, online high-end subscription service Tonx co-founder Tony Konecny said his company and Blue Bottle are “joining forces” to expand the service on a more ambitious scale. The company had been raising funds for increased roasting and production facilities, but those plans may be shelved with the Blue Bottle partnership.

“With Blue Bottle, we have found a more established company that still has an innovative startup culture, continues to evolve, and is dedicated to improving people’s experience of coffee on an ambitious scale,” Konecny says. “And they have resources we could only dream of.”

Tonx plans to continue its current production cycle and will maintain accounts for existing customers, but it will eventually adopt the Blue Bottle name. Says Konecny, “Further down the road we will sunset the Tonx brand and unveil a new and even richer experience closer to our original ambitious vision under the Blue Bottle banner.”