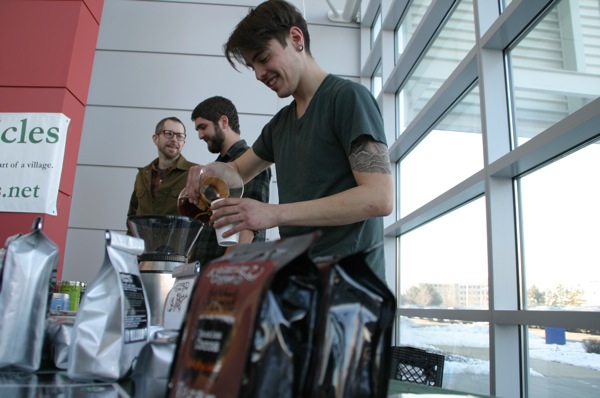 From CoffeeCon 2012. Photo by Nick Brown.

CoffeeCon, a consumer-focused daylong trade show now in its third year, is coming to Chicago this Saturday, April 12. Show director and coffee industry veteran Kevin Sinott and his team are also expanding the show in new cities this year, including San Francisco on June 7, New York on Oct. 12 and Los Angeles on Nov. 8.

(more: An Origin-Focused Preview of SCAA 2014 in Seattle)

The show maintains a heavy emphasis on education through seminars on topics such as coffee history, traditional cultural brewing methods, home brewing methods and home coffee roasting, while the trade show floor remains largely dominated by roasters and home equipment suppliers hoping to reach consumers of all experience levels. Sinott says this year’s show will make further efforts to connect consumers to the source of their coffee.

“We want to create a kind of farmstand relationship between consumers and farmers,” he says. “It’s not an easy relationship to develop, but it is important. It’s like when you buy veggies from a local farmer. All of the sudden, that consumer develops a completely different consciousness about the food and where it’s coming from.”

Seminars include a 2-hour introduction to all things coffee from specialty pioneer George Howell. Other speakers throughout the day include Jim Schulman, Marysabel Caballero, Oren Bloostein, Christian Ott and Harold Kim. New to this year’s event is a coffee writer’s roundtable, during which I will be joining Sinott and A Table in the Corner of the Cafe founder Drew Moody for a panel discussion on topics including: professional coffee writing, ethics and coffee vs. wine.

For a full schedule events and ticket information, check out the CoffeeCon website.