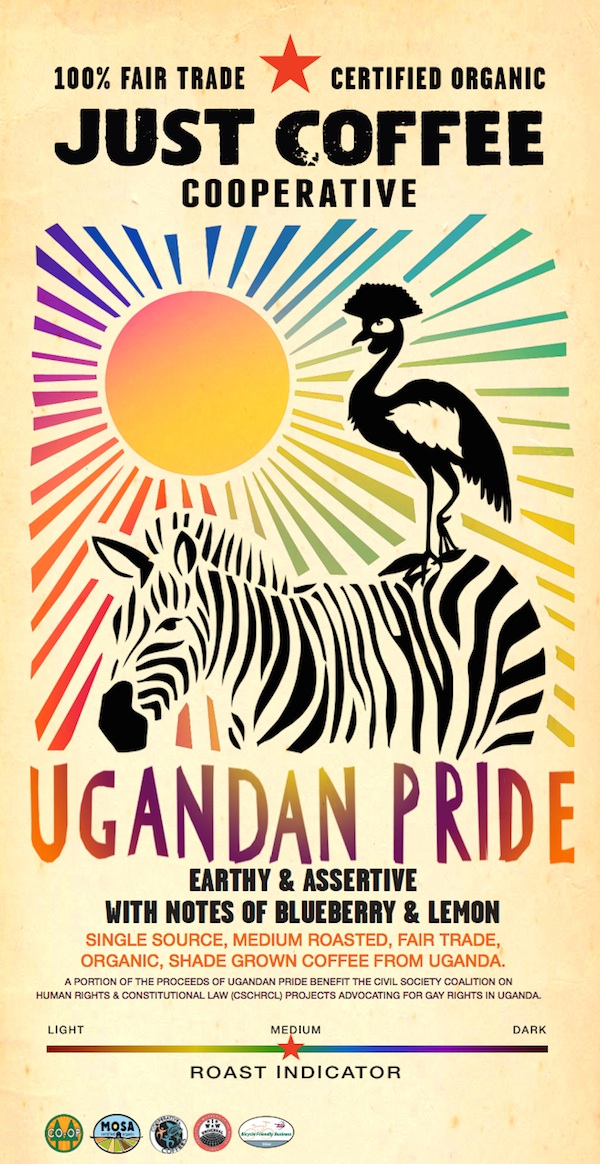 Sometimes the best ideas start with an IT guy watching TV.

Just Coffee Cooperative of Madison, Wis., is rolling out a new coffee sourced from Uganda, with 10 percent of the proceeds going to an organization working on the ground to repeal the country’s Anti-Homosexuality Act. The most extreme of its kind in Africa, the Act criminalizes same-sex relations and knowledge of same-sex relations in Uganda and among Ugandans abroad, with penalties up to life in prison.

While Just Coffee has been working with a cooperative in Uganda for years, some loyal customers questioned the company for supporting Ugandan coffees as the country’s leadership was considering anti-homosexuality legislation that included a death penalty. So the Just Coffee team decided to put a political foot forward, supporting the Civil Society Coalition on Human Rights and Constitutional Law (CSCHRCL).

They connected with the CSCHRCL after Just Coffee IT specialist Dylan Hughes saw the work the group was doing in a Vanguard documentary called “Missionaries of Hate,” which showed the influence of U.S. religious groups on anti-homosexuality policy-making in Uganda.

“It was a pretty easy thing to get everyone here on board,” Just Coffee Sales Director Nate Tredinnick says, acknowledging that the move may not be popular with all consumers. “We see this as a basic human rights issue. If someone gets upset about this and we lose a customer over this, our feelings will not be hurt.”

(related: From the ‘Rape Capital of the World,’ A Story of Coffee and Hope)

Just Coffee Co-Founder Matt Earley says the fundraising effort is simply an extension of the company’s core values, which include transparency through the supply chain, but can also extend to divisive political issues from local to global levels.

“This is really consistent for us as a company,” Earley says. “We know these kinds of things can be controversial, but part of what we are all about is taking a stand.”

As for the coffee itself, Tredinnick says it resembles a milder Sumatra in body, with some earthy tomato and blueberry notes: “It is one we have been very excited about here.”