From the ‘Rape Capital of the World,’ A Story of Coffee and Hope

I’ve been captured by the allure of one of the last standing bastions of potential for specialty coffee production left in the world. For that reason, I write this as I travel across the world for a second visit to the eastern shore of Lake Kivu in the Democratic Republic of Congo in less than a year.

Traveling the dirt roads and lakeshores of the eastern DRC for my first visit last summer, I fell in love with everything about the place; the kind, warm, resilient culture: the pulsating rhythms of Congolese Rumba music; its history; and the lush green mountains that cascade into the depths of the expansive Lake Kivu. One of Africa’s Great Lakes, the 1,040-square-mile lake is the epicenter of ongoing turmoil in the heart of Africa reaching back nearly two centuries. And as in most every case where there are tragic examples of heartbreak and terror, you find the perseverance of the human spirit, inspirationally working to create a more just future. 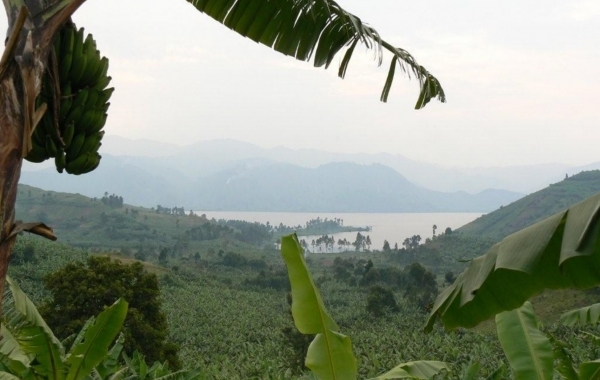 The 2 million inhabitants who reside on Lake Kivu’s shores in both Rwanda and the DRC have been engulfed in a series of wars (Rwandan War, Congo War 1 and 2), ethnic conflict, and the pillaging of the region’s resources by global economic interests. Their ancestors have long been enslaved or massacred, oppressed by the Belgians who plundered the land for all its ivory and rubber, leaving behind death and dire poverty.

Lake Kivu has also swallowed many inhabitants of its shores. For much of the past 30 years, the lake has been the only means by which Congolese coffee farmers could smuggle their beans to sell on the banks of Rwanda. Hundreds have drowned making the treacherous journey illegally, at night, in dilapidated wooden boats unfit to carry the heavy load.

As a solution, ten years ago, farmers from the eastern shore of Lake Kivu banded together to form Sopacdi, the first fair trade, organic coffee cooperative of its kind in the DRC, offering a glimmer of hope and opportunity to thousands throughout the region. Farmers come from different ethnic groups, speaking three distinct languages, Kirundi, Kihavu or Kinyarwanda. The co-op acts as a unifier and community builder in a land rife with ongoing conflict. At Sopacdi, 3,601 members farm over 12,580 acres of Arabica coffee beans at altitudes between 1,400 to 2,000 feet above sea level. The high coffee-growing altitude coupled with the rich volcanic soil offer a cup of coffee that sparkles with a slight citric acidity, and medium juicy body that tends to linger in the mouth seconds after you swallow it.

Just three years old, the Sopacdi coffee washing station is the first to open in the DRC in over 40 years. As a result, their coffee is the first to reach the highest national grade — Kivu 2 — since 1967. The washing station is a sprawling compound of coffee drying tables that spans from the lakeshore to beyond view in the hills above. During the harvest season it provides hundreds of jobs, making it the largest employer in the region. To increase yields and create a healthy diverse habitat, the co-op manages four tree nurseries, each producing over 100,000 seedlings (80% coffee and 20% shade trees). Once coffee is collected in any of the 10 sectors, it is brought to the washing station where it is depulped, washed, fermented and dried. Sopacdi is proving that high-quality specialty coffee can make a resurgence in a land last seen thriving with the red coffee cherry before the end of the Belgian colonization in 1960, and the hillside is filled with 50-year-old trees with new shoots sprouting out of them. A new crop is growing from the roots of colonization and conflict. 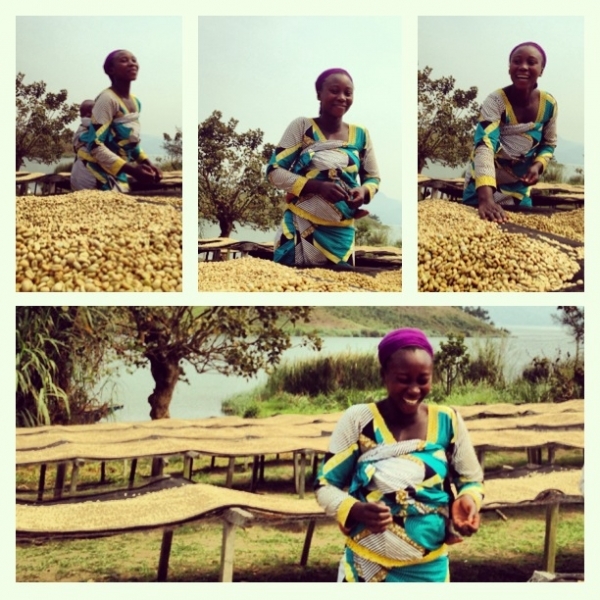 Sopacdi also is also taking a hands-on approach to supporting their female members. Due to the conflict, lack of access to health care, and difficulties traversing the lake to sell coffee before the formation of the cooperative, there are many growers who are widows. The members of Sopacdi have addressed the inequality and hardships faced by women by forming a women’s coordinating committee and a number of women’s groups in each sector. Each sector has monthly meetings with the women of the co-op where they meet and decide how to use a 2-cent premium per pound that all coffee buyers pay for any coffee grown by a woman. I visited the Kalunga sector, which has 642 Sopacdi farmers, 157 of whom are women.

We arrived at the sector office by traversing narrow alleys, stepping carefully through the dirt and watching our heads to avoid hitting the sheet metal roof sloping down. A small wooden building nestled on a Kalunga hillside and surrounded by hundreds of similar structures, the office doubles as the meeting room for Kalunga’s women’s empowerment group. Fitina Wabus, a youthful 36-year-old with seven children, rocked her infant son as her toddler daughter played on the dirt floor nearby. The wind whipped through the cracks between the wooden slabs that make up its walls. I asked the group of nearly a dozen women why this women’s group is so important.

(more: A Decades-Long Struggle for Peaceful Existence through Coffee at Maya Vinic)

“The biggest change for us is that now we have a group of women we can depend on. Before having this group, if I was sick, I had no one to help me with my kids,” Fitina explained. A surprising answer, as most would assume the largest benefit would be the increased income due to the women’s premium. Even though the women receive micro-loans to buy cattle, pigs, and chickens, and they have used the funds to start their own flour mill as a revenue generator for the group, the most important benefit repeatedly stated by the women was the more intangible aspect of the project: Having their own funds to administer gives them the opportunity to take a break from the round-the-clock child rearing and household managing regimen that is so prevalent for Congolese women. In other words, since they are earning income, their husbands recognize their “right” to leave the household. These women have found a support network for the first time in their lives.

Of all the issues I have encountered in the world, the need to support the women in this region is one of the most necessary, worthy, and urgent. Dozens of illegal armed groups and rogue army units have carried out endless human rights abuses against them. The New York Times recently called it the “rape capital of the world,” citing that a woman is raped once every minute on average. Minova, where Sopacdi’s main offices are located, is ground zero in what Margot Wallström, the United Nations’ Special Representative on Sexual Violence in Conflict has deemed “the most dangerous place in the world to be a woman.”

While visiting Sopacdi, we stayed in the Monastery at the Catholic Parish of Kitalaga Bobandana. Established in 1912, the Monastery, along with the church and adjoining school, is perched on a hill overlooking the bustling village on a small cove on Lake Kivu that has grown into a small town due to the displacement of many throughout Rwanda and the DRC since the Rwandan genocide of 1994.

Just eight months before my visit, in late November 2012, retreating Congolese army troops took over the Monastery and school, ransacking them both. Disorganized and defeated, they went down the hill into the village, raping and pillaging. Over 130 women and girls reported being raped, many repeatedly over the course of 24 hours. Most of the perpetrators have not faced justice. Unfortunately, this is just one example of hundreds, if not thousands, in recent years of the realities women face on a daily basis in the DRC.

(more: Farmworkers Left Behind: The Human Cost of Coffee Production)

As I motored away from the Sopacdi office in a small wooden boat, en route to the coffee washing station just 20 minutes up the lake, I looked back at Minova and contemplated this horrific collective act and the horrors that the people of the region have faced. I reflected on the inspiring stories I have heard from women participating in Sopacdi’s women’s empowerment program, and I saw so much potential for increased involvement as the co-op continues to grow and mature.

The buzzing outboard motor pushed past the fishermen putting out their lines in the morning, with the backdrop of green lush mountains and birds diving into the depths in search of food. The Sopacdi board members and I chatted, smiled, and dipped our hands down into the cool crisp water as the boat hurled us forward. For a moment, all the chaos, struggle, danger, heartache, and injustice disappeared. In our collective present moment, enjoying the breeze and nice break from bumpy roads and dust that I’d travelled over the six hours since I last saw a decent paved road, I felt the resilient spirit of the Congolese people that pervaded my entire visit. In that moment on the boat, I realized that humans persevere, no matter the obstacle, by learning to live in the present while struggling for a better future. For me, and for us at Higher Grounds, that is what Sopacdi represents.

(editor’s note: The Higher Grounds coffee from the Sopacdi cooperative is available here.)

Chris Treter
Chris Treter is the co-founder and director of Higher Grounds Trading Co, an organic coffee roasting company and certified B Corp with a coffee bar in Traverse City, Mich. Chris spends much of his time working in the field with their coffee farming partners and is also founder of On the Ground, a not-for-profit organization dedicated to bringing fresh water, education, and health care to those without.