The Famine Early Warning System Network (FEWS NET) released another update on the food security situation in Central America last week, one that may have gotten largely lost in translation to English-speaking, coffee-focused readers.

The English-language summary of key messages includes this reference:

For the July to September period, food security will deteriorate in parts of western and eastern Guatemala, reaching Crisis (IPC Phase 3).

It is unsettling, to be certain. But generic. The Spanish-language report for Guatemala is considerably more specific. My quick-and-dirty translation follows:

Through June, municipalities in the east and in the western highlands that are highly dependent on coffee will remain Stressed (IPC Phase 2). From July to September, these households will look to compensate for the food deficits caused by two years of poor harvests and lower income with negative coping strategies, classifying them in Crisis (IPC Phase 3).

This version of the story makes the situtaion more immediately relevant to the coffee industry. The map of the areas moving into the Crisis phase includes important specialty origins: 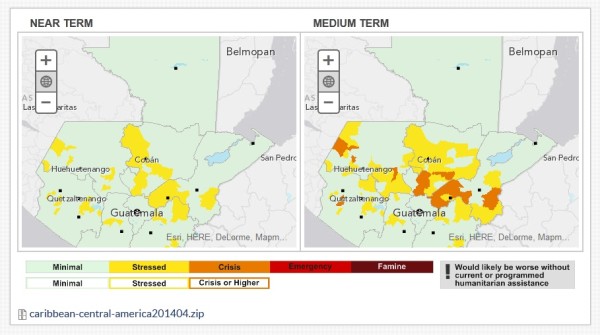 And the reference to negative coping strategies – characterized below as leading to accelerated depletion of livelihood assets – means the coming months will test the resilience of thousands of smallholder coffee farmers:

The projections for El Salvador and Honduras are less grim, but equally plagued by translation gaps. The English-language message for the July-September period is generic:

El Salvador and parts of southern and western Honduras will be Stressed (IPC Phase 2).

Coffee plays a prominent role in the Spanish-language version of these storylines Again, the translations are mine:

In El Salvador, the reduction of coffee income and the disappearance of existing food stocks (which regularly run out in March/April) lead to a Minimal (IPC Phase 1) classification for farmworkers and smallholder farmers in coffee-growing mountain ranges who will be supported by the World Food Programme from April to June; in the absence of food aid during the period from July to September they will be classified as Stressed (IPC Phase 2).

In Honduras, due to a lack of income from coffee employment and sales and the exhaustion of food reserves, households of farmworkers and poor farmers in the Western Zone and South are classified as Stressed (IPC Phase 2) until the Primera harvest in September.

If the FEWS NET projections are accurate, then we know that beginning next month smallholder coffee growers and coffee farmworkers are facing acute food insecurity in Guatemala, and need additional food aid in El Salvador and Honduras.