Hidden Influencers: How Root Capital Is Expanding the Lens on Women In Agriculture

Back in February, Root Capital released a white paper on social and environmental performance management, the inaugural publication in a series of issue briefs on strategic insights the organization has gleaned from its work. Last week, Root published the second brief in the series — this one focused on gender lens investing — that is worth a closer look.

The latest Root Capital issue brief is focused on women it calls “hidden influencers” in rural enterprises — not the women managers at the top of the pyramid nor the rank-in-file women farmers and farmworkers at its base who seem to be the subject of so much discussion in policy and corporate circles these days, but the women working as accountants, field officers, agronomists and in other “less conspicuous” roles in the middle of the pyramid. Although it doesn’t use the popular term, Root Capital clearly seems to see these women as “intrapreneurs” with what it calls “outsized influence” within their respective enterprises – influence that can be used to increase rates of women’s participation and leadership in those same enterprises.

(related: How Beekeeping is Helping Farmers Cope with La Roya in the Guatemalan Coffeelands)

By shining some light on the role of mid-level women influencers lost in the shadows of their organizations’ leaders and the sheer numbers of women at the base of the pyramid, Root Capital seems to be reflecting a bit of its own gestalt. After all, Root Capital is the financial institution that has done more than anyone else to fill the “missing middle” of credit markets in the coffeelands, lending to coffee enterprises that are too big for microfinance institutions and considered too small or risky for commercial bank loans. 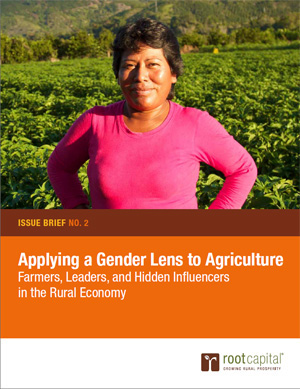 WHY FOCUS ON GENDER?

Root Capital advances here the same argument in favor of a more deliberate focus on gender issues as it did in its first brief on the importance of social and environmental performance, namely: it helps Root Capital more effectively advance its mission to simultaneously drive improvements social impact and financial performance. The document makes passing reference to the enthusiastic conclusion of a significant body of international development research: the social returns on investment in women of all ages, from girls’ primary education to incorporating more adult women into the workforce, are high.

To the extent Root Capital’s work brings more women into the grassroots enterprises it serves and puts more income into the hands of women, it is driving social impact. It further cites more recent findings that improvements in gender equity can—like the social and environmental performance issues Root Capital raised in its first brief — be sources of competitive advantage. Unlike the evidence advanced in its previous issue brief, in which Root Capital showed evidence of improvements in its own profitability as a result of its monitoring of non-traditional metrics, this brief enlists the work of others to support its claim.

The publication explains how Root Capital’s “gender lens” has evolved, from early and rudimentary efforts to “count farmers” to a more elaborate set of eight metrics that are part of organization’s social scorecard. On the basis of these metrics, Root reaches a determination about whether a client organization is or is not “gender inclusive.”

From my reading, the metrics still seem to have a bit of a “counting” orientation. The challenge I see is documenting changes that begin to break down what Root calls “inherently inequitable systems.”

On the basis of my training in international development and my experience with the integral human development framework, I locate these “inherently inequitable systems” in both formal structures (institutions, laws, etc.) and informal systems (values, beliefs and norms). The formal institutional frameworks that may discriminate against women are structural and formidable – “hard” barriers to women’s empowerment. But we should not underestimate the power of “soft” obstacles like the “cultural norms” that Root Capital cites in its issue brief: the development economist and Nobel laureate Amartya Sen published a chilling essay in 1990 suggesting that 100 million women are missing from the Asian subcontinent as a result of one particularly insidious cultural norm — pervasive perference for male children—that led to systematic neglect of girls and higher rates of early childhood mortality among girls than boys.

Through my own studies and experience, I have come to the (decidedly novice) understanding that policies and programs that are truly “gendered” or “gender-sensitive” are those that take these structural and systemic sources of bias as their point of departure — their design takes into account the ways that a woman’s lived experience is different from a man’s precisely because of the social construct of her gender category. In this regard, I found the most exciting aspect of Root Capital’s Women in Agriculture Initiative not the metrics on its gender scorecard but its strategy to develop financial products and services that are uniquely designed for women. In my mind, these are the instruments of innovation that hold the greatest promise to deliver true empowerment for women by dismantling “inherently inequitable” structures and systems.

As it did in its inaugural issue brief on social and environmental performance management, Root Capital makes no bones about the goal of its publication: to push other organizations at the intersection of impact investing, social enterprise and international development to broaden the discussion and take action. In the Synopsis, Root Capital says it seeks to “expand the dialogue” in these spaces to include a broader conceptualization of women’s empowerment.

In the Introduction, Root writes: “We encourage other investors and development practitioners to…expand their gender lens.” And in the Conclusion: “We encourage others who share our goal of unlocking the economic potential of women to expand their focus beyond women as leaders to include women from across the economic spectrum…and begin a substantive dialogue on how we can collectively support their long-term economic empowerment.”

Here, here! Thank you, Root Capital, for provoking important conversations and pushing us all to considered action. I look forward to your next issue brief.