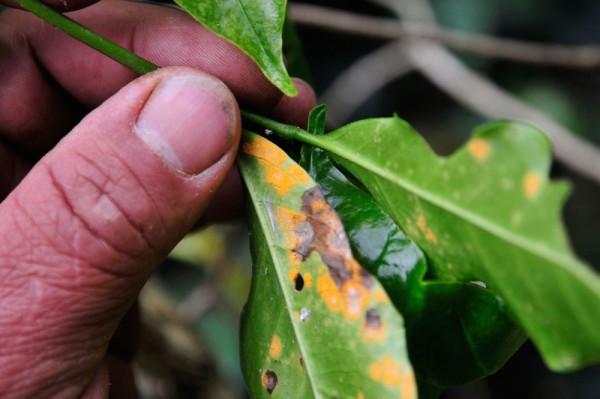 Back in May, FEWS NET predicted that coffee leaf rust would create a food security Crisis in coffee-growing regions in eastern and western Guatemala between July and September. It did.

FEWS NET says that rainfall and local market conditions over the next few months will determine how bad things will get, but it warns of a rapid deterioration of food security across the region in early 2015, and urges governments to prepare for the largest influx of humanitarian aid in Central America since Hurricane Mitch hit in 1998.

Maize is native to Mesoamerica. Anyone who has ever visited the coffeelands in Central America knows this ancient crop is as vital to its inhabitants today as it was thousands of years ago. And in a region where poverty limits access to animal-source proteins, beans are a leading source of vegetable protein, notably eaten refried in Guatemala and in pupusas in El Salvador, baleadas in Honduras and gallopinto in Nicaragua.

Both are harvested in September in what is referred to as the Primera harvest, which normally marks the end of the lean season in the coffeelands. But Primera projections suggest that both will be in short supply this year.

Rainfall is down across the region, in some places by as much as 75 percent. The canícula, the scorching break in the rainy season that traditionally lasts just 15 days, burned hotter and longer this year. As a result, Primera maize yields are expected to be down bewteen 9 percent (Guatemala) and 75 percent (Nicaragua), with bean yields down between 20 percent (El Salvador) and 75 percent (Guatemala). The drought will likely mean lower production for the Postrera harvest that starts in December.

(related: Materia Gris: How One Honduran Cooperative is Winning the Fight Against Leaf Rust)

With the low production come high prices, which puts many smallholder coffee-growing families–and many more families dependent on coffee farm labor for income–on the brink of real trouble. The projected crop losses are so severe that poor households will not be able to replenish their food reserves. And they will not likely be able buy what they need on local markets: there will be less maize and beans available, prices will be unusually high, and the steady decline in coffee income has left them with less cash on hand. In response, the most desperate households will resort to the kinds of negative coping strategies–like selling off household assets–that mortgage future earning potential to meet immediate food needs.

The FEWS NET report concludes with this ominous paragraph:

The severity of expected food insecurity, the early onset of needs, and the size of the affected population are expected to be atypical for the region. Depending on the performance of rainfall and markets over the coming months, the number of people in need of assistance could be the largest since Hurricane Mitch in 1998. Governments and their partners should begin reponse planning immediately to protect livelihoods and household consumption over the coming year.

When the scope of the Central America coffee leaf rust epidemic first started to come into focus back in late 2012, we started convening meetings internally within CRS and with colleagues from other aid agencies to begin planning a response. In those circles, and in the lexicon of international humanitarian aid, we referred to it as a “slow-onset emergency.”

When most people think of emergencies, they think of dramatic events–earthquakes, tsunamis, hurricanes–that suddenly leave large numbers of people injured, homeless, hungry or otherwise acutely vulnerable. These sudden-onset emergencies tend to be sensational in the material damage and human suffering they cause; they also tend to attract lots of media attention and lots of resources for humanitarian assistance.

By contrast, slow-onset emergencies are usually the result of a confluence of multiple processes that unfold more gradually and less dramatically. The current situation in Central America is a prime example.

The drought has been months in the making. Coffee leaf rust has been present in the region in epidemic proportions for two harvests now and was first reported as early as 2010. And prices of food staples have been rising in parts of Central America since January. None of these in isolation has provoked hunger on a wide scale. But if they converge in the coming months as expected, we will have a humanitarian crisis on our hands in early 2015.