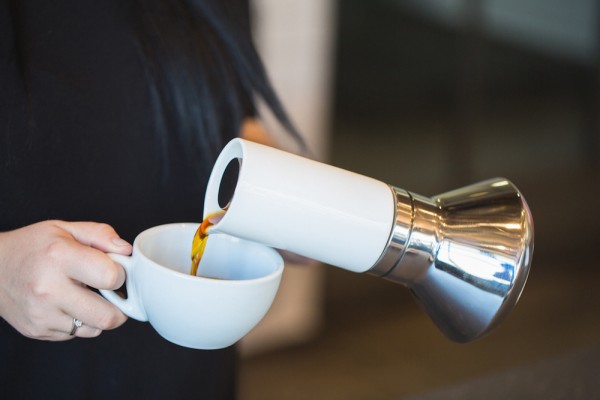 Blue Bottle Coffee’s website has been down much of today. Perhaps not coincidentally, the trouble began shortly after the company announced a new brewing product: The reinvented moka pot. The brewer was designed for Blue Bottle by Brooklyn-based Joey Roth, who introduced a previous moka prototype more than four years ago, and also designed the ceramic speaker systems used in two of Blue Bottle’s retail stores.

Functionally, Blue Bottle’s new gadget is very much a moka pot, with a metal water chamber that makes contact with the heat source, while water vapor travels through a ground coffee chamber, and finally to a brewed coffee chamber at the top. Where it departs from the more traditional pots found for decades in home kitchens is in materials selection and cosmetics.

There is stainless steel base is wider for more even heat distribution, a longer brew spout, for quicker water cooling and a heat-diffusing cork handle that resembles one of a fishing rod. Some friends of Daily Coffee News have been tinkering with moka pots for months, insisting that the results achieve something like an extra-long but uncharacteristically balanced espresso, despite the fact that the brewing method and device have largely fallen out of favor in retail and home aficionado applications.

(related: What Happens when a Hungarian Roaster Geeks Out on a Moka Pot for Months)

According to Cool Hunting, to whom Blue Bottle gave the product announcement to break, Roth and Blue Bottle Co-Founder James Freeman have been tinkering with this particular design for some two years. The company suggests the design improves upon the “murky and muddled cup” that results from traditional mokas. We can’t attest to cup quality, but if nothing else, the brewer is unarguably pretty to look at.

Blue Bottle is currently pre-selling the moka pot for $100, with orders expected to ship in early 2015.

It ain’t no $350 Chemex Ottomatic, but now even the old school brands smell money and are going upscale with their offerings.

“…despite the fact that the brewing method and device have largely fallen out of favor in retail and home aficionado applications.”

Funny, the moka pot is still used by millions of Italians, usually more than a couple of times per day. But, of course, Italians are not aficionados. Ahh, but now with Blue Bottle’s coffee genius’s stamp of approval, it will certainly be appearing at the hippest cafés across the USA.

Bah! Italians, what do they know..