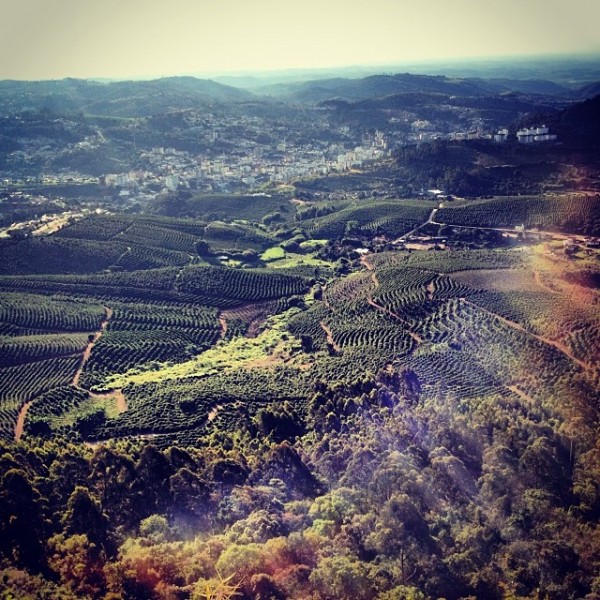 2011 photo in Brazil by Mark Hillary.

Green coffee prices continued in a downward slide through February, despite recent estimates that global production will result in a deficit this year, according to the latest monthly report from the London-based International Coffee Organization.

The ICO’s composite indicator price — a historical data series that reflects price monitoring for coffees from all the world’s main growing regions — dropped to a monthly average of $1.411 USD per pound in February, a 4.6 percent decline from January and the lowest monthly average in a full year. The ICO attributes the price drop, which has followed a peak of $1.85 in October 2014, to “heavy selling pressure” in Brazil, where weather conditions have been favorable for the current crop.

Despite the immediate downward trend, ICO data suggest an upward trend may be imminent, as current estimates for world production for the crop year 2014/15 are at 142 million bags, a 4.6 million drop off from last year.

“This puts the coffee market into a deficit for the current year, although stocks in exporting countries have so far allowed exports to continue at a strong pace,” the ICO said.

Arabicas, particularly from Brazil and Colombia, saw the sharpest decreases last month, at 6 percent and 5.8 percent, respectively, as the composite price for robustas actually increased minimally.

The ICO’s February report contains some unexpected good news in the form of revised upward production estimates in some traditionally smaller global markets. While the total production estimate is 3.2 percent less than last year, it was revised upward slightly due to strong performances in Honduras, Tanzania, Cameroon, Rwanda and Burundi. Estimates have been revised downward in India and slightly downward in Mexico, while Brazil, Vietnam, Colombia and Indonesia held steady over the previous month.

In its regional breakdowns, the ICO suggests total output will be decreased by 6.8 percent in South America, and by 4.8 percent in Asia and Oceania. Output is expected to increase by nearly 8 percent in Mexico and Central America, which are still trying to rebound to 2010/11 levels, before the leaf rust outbreaks. Additionally, African coffee production is now estimated to reach 17 million bags, which would be the highest output from the continent since 1999/2000.

Download the complete ICO February report, including stockpile estimates and analysis of arbitrage between arabica and robusta.

Meanwhile, since February 2015, the international price of coffee futures is down, but the International Coffee Organization (ICO), says that in the physical market there is a supply deficit.

The OIC, considered likely a recovery in coffee prices in the coming months, before the supply deficit experienced by the market and the prospect that this will continue for two more years.

Coffee prices reached in February its lowest in a year in the futures market, to trade at US $ 128.75 per quintal, despite the anticipation of a supply deficit in this coffee year, due to investor perception that the improving the climate in Brazil impact on better crops.

This minimum contrast to US $ 185.09 reached last October, when investors were concerned about the shortage would cause rampant drought in the Latin American country, the world’s leading exporter.