The Costly Effects of the Current Drought on Coffee Farmers 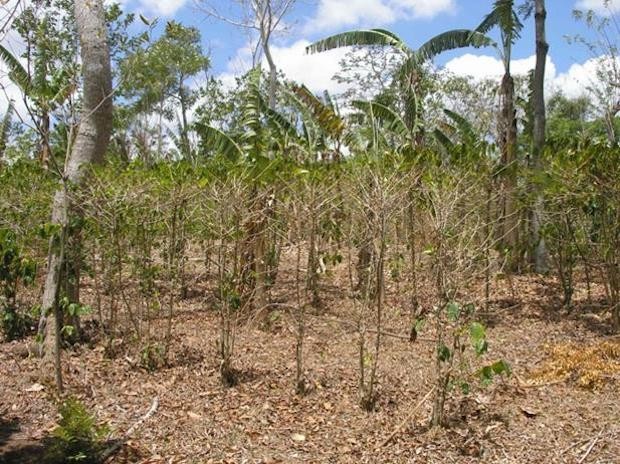 It is no secret that the current El Niño phenomenon has caused drought in the global coffeelands, particularly Central America, the Caribbean, and East Africa. Drought conditions in Central America and the Caribbean are occurring for the second consecutive year, wreaking havoc on cash crops, food staples, and livestock.

Satellite-derived rainfall estimates indicate that the first half of the rainy season (June-August) was the driest in 35 years. On our family farm, September is normally the greenest and most vibrant for our three story shade canopy and coffee plantation. This year, soil moisture was undetectable, trees were defoliating and even the weeds were dying in what is normally the rainiest month of the year.

What are the implications of this punishing drought for coffee farmers? There are many, but I will mention four of the most significant.

Most smallholder coffee farmers also plant corn and beans for family consumption. Farmers experienced 50 percent staple crop loss on average for the first planting season in Central America, and in many cases 100 percent losses, according to the Food and Agriculture Organization of the United Nations. That simply translates into less food on the table, as farmers have few if any reserves following a dry 2014. Surface water availability decreases and ground water tables go down, causing increased hardship for families to access water for household and agriculture use.

Coffee farmers treasure the flowering season. For about one week, a sweet perfume aroma pervades the farm, the white flowers blanket the landscape like snow, and farmers get a glimpse of what their yield could potentially be if they do their work right and nature cooperates. Drought wreaks havoc on coffee flowering. If it doesn’t rain at the right time, or if it rains too much or too little, flowering is uneven at best and meager at worst.

Drought produces smaller beans of uneven size and lighter density. Beans of varying size grades are bad for specialty coffee roasters who need more uniformity to get an even roast. Smaller beans are usually not accepted as export quality for this reason, and farmers are forced to sell them at a lower price on the local market. The result is less exportable coffee volume, and less income in the pockets of farmers from coffee. Low yields combined with this year’s low coffee prices are a lethal combination, especially for farmers trying to recover from the 2014 drought.

With lower yields and uneven flowering, coffee picking is spread over a longer period of time and the number of pickers reduced. This has a negative impact on the community and county level economy that depends heavily on seasonal coffee labor opportunities for the poorest and most vulnerable.

When farms endure multiple dry periods when it should rain, coffee plants have a difficult time surviving the dry season that follows. The result is that many plants either die or on life support by the time the rains arrive the following season.

Climate change will continue to bring strong weather events, uneven rainfall, and drought to many regions of the coffeelands. Coffee does not do well under such hostility. Crops that can withstand a broader spectrum of temperature variance, that can manage during both strong rainfall and longer periods of drought, and that can adapt to a variety of soil conditions are the climate capable crops of the future. Coffee farmers, particularly the lowland farmers in the current or coming drought corridors, should heed the warning signs and adapt to protect their livelihoods now.

In future posts, I will be exploring two adaptation approaches: specific crop diversification strategies and building resilience into the production system.