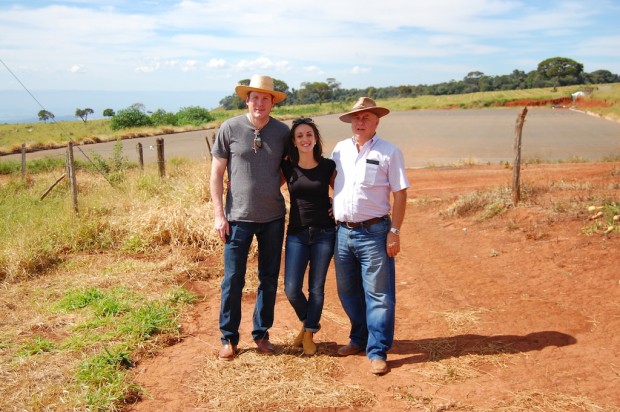 Supply chain transparency and intimacy between its links are sought-after but not easily achieved goals for many specialty coffee businesses. Progressive roasters and importers are always striving for greater involvement with the fruit’s actual producers, while in a few rare cases, true vertical integration is achieved from the farm all the way to the cup.

New York’s Nobletree Coffee, the Brooklyn-based roasting brand of an investment company that owns several farms in Brazil and will soon have retail locations around New York City, is one example. Another example is Portland’s Nossa Familia Coffee, which roasts, sells and serves coffees grown on the owners’ fourth-generation family farm in Brazil. Now, in the less densely coffee’d Phoenix-area city of Chandler, Ariz., Julia Peixoto Peters and her husband Jeff Peters are connecting consumers directly to the farm through Peixoto Coffee, which imports, roasts and serves coffee grown on their own family farm as well.

Julia Peixoto Peters is the youngest of three daughters of Brazilian coffee farmer Jose Augusto Peixoto. She represents at least the fourth generation of the Peixoto coffee-producing family — possibly fifth, though family records don’t go back far enough to be sure. After years of putting a law degree to work as counsel for the shipping company DHL, handling issues related to international trade, shipping logistics and project management in Latin America, she and her husband Jeff Peters — an aerospace engineer and devoted home-brewing and home-roasting hobbyist — decided not only to keep the family’s farming heritage alive, but to guide it to new levels of quality and sustainability. 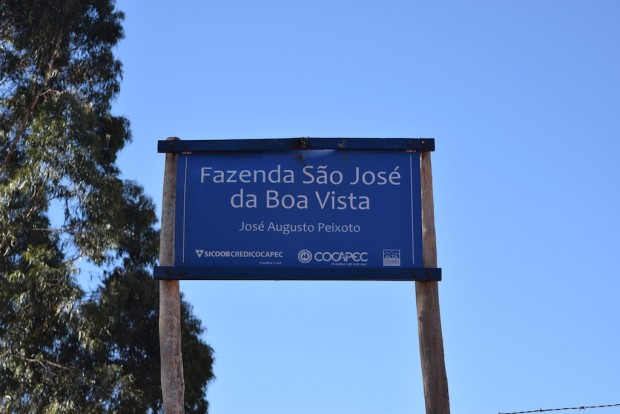 When Peixoto Peters’ grandfather passed away a couple years ago, her father became the last living family member fully devoted to the coffee farming legacy. “He’s a doctor by trade, but he does coffee farming for his retirement, and he’s been doing it his whole life,” Jeff Peters told Daily Coffee News about his father-in-law. Portions of the farm had already been sold off, and as the now-eldest farming Piexoto was also getting into his 70s, it was time to start planning for the future. “A couple years back, we started talking about how at some point, we’re going to have to carry the torch of the Peixoto family. It’s a really cool thing and we don’t want it to die out.”

Yet the stateside Peters family didn’t want to uproot themselves from the Arizona town that they loved, so they took it upon themselves to establish a business in their hometown of Chandler, just outside Phoenix, that integrated the farm and benefitted everyone. “It was a big task, but we decided last year to go for it,” said Peters. The Peixoto Coffee café and roastery opened its doors in January, 2015. 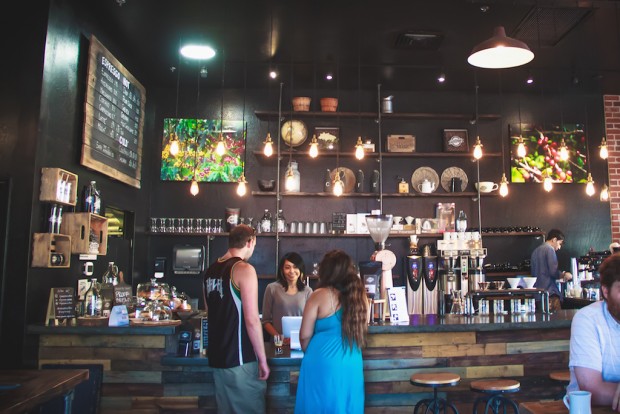 “Julia and I are very different. She’s a visionary. She has an unlimited appetite for risk,” said Peters. “Being an engineer, I’m a little more risk-averse. I mean, I did rocket targeting and things, which is a pretty unforgiving business.” Peters therefore handles the books, the roasting and the brew parameter development for Peixoto Coffee, and did much of the planning for the buildout and construction of the café space. “For me, it’s always about, ‘Are the numbers there, can we do this, how to implement it.’ I let her vision pull me along into the business,” said Peters, who has also been surprised by just how fun, successful and gratifying the coffee business has turned out to be.

For now, Jose Augusto Peixoto and his staff remain at the helm of the Fazenda Sao Jose da Boa Vista, the 600-acre farm ranging in altitude from 1,250 to 1,300 meters above sea level. The farm’s average annual harvest yields about 5,000 natural-processed 60-kilo bags, although this varies depending on weather and other factors. Peters reports that they’ll start experimenting with honey processing in 2016. “We’re trying to get him out of the commodity market, and show him what he can achieve with specialty coffee if he applies his resources differently on the farm,” said Peters. “Instead of focusing on quantity, the focus is on unique coffees of unique quality, and showing him that on the customer side, that’s something that’s valuable.” 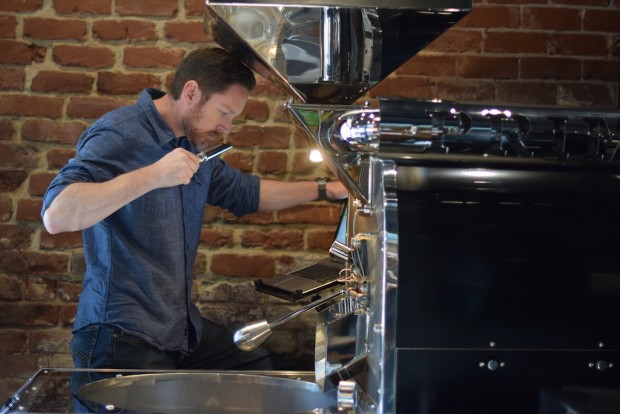 Jeff at the roaster

Varietals include Bourbon, Catuai, Catucai, Mundo Novo and others, which typically score in the 84-89 point range. They have an agronomist on staff and are associated with a variety of Q-graders that lend their expertise to cupping and grading for quality control both on the farm and in the US.

On the retail side, Peixoto Coffee is humming along in a 1,300-square-foot space in Chandler’s Historic Downtown district, with a solid three-group La Marzocco Linea, two Mazzer Konys and a Mahlkonig EK-43 behind the bar. The business offers coffees from the family farm as well as other origins, all of which Peters takes pride in roasting on a deftly modified Primo Roasting Equipment PRI-35 15-kilo-capacity machine that stands at attention in full view of patrons on the café floor. With his aerospace engineering background, challenges like adding stepless burner and fan control, and custom-writing his own roast-logging, closed-loop control and profiling software were a pleasure. “I used to do rocket guidance, so controlling a roaster is not too big a deal,” said Peters.

Peters was drawn to Primo by its combination of price, adaptability and dependability. “We’re a start-up, so we didn’t want to go out and buy a Loring or anything,” said Peters, who also considered a Diedrich IR-12 before deciding on PRI-35, knowing that he’d able to find work-arounds for what discrepancies exist between the two machine designs that ultimately share plenty of features. Its ease of maintenance was also a draw. “There are no belts or chains on a Primo, it’s all direct-drive,” Peters said. “Almost all the parts are off of Granger, so you can replace motors and things, which is nice. Although it’s been a super-reliable machine, I haven’t had any issues with it.”

A home-brewer of beer for 15 years before trying his hand at roasting coffee, Peters came to the process not only with an engineer’s technical ingenuity but also with experience in the trial-and-error tinkering process needed to coax the finest culinary traits out of raw, natural materials. “The approach to the craft, which I think is half the learning process, is very similar,” said Peters. “You have certain physics and chemical reactions that are taking place. By and large, there are bounds, you can only do so much without ruining the product. But within those bounds, there’s a lot of room for craft, and for finding ways to exemplify the unique characteristics of the brew, or the coffee that you’re roasting.” 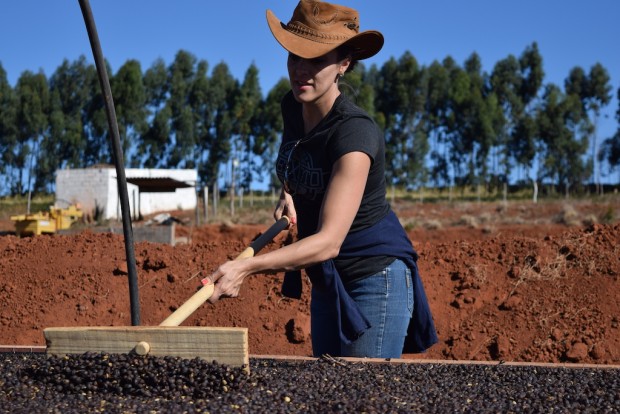 Peters’ beer craft experience is also even more directly translated in Peixoto’s offerings through its six taps of kegged, draft coffees and other beverages, all of which they intend to distribute locally to wholesale partners. Iced cascara, regular cold brew and precisely nitrogenated cold brew are all on offer, alongside seasonal specialty drinks. Both the shop and the wholesale business have been hugely successful so far, to the extent that they’ve actually had to put the brakes on accepting too many clients at once, in order to grow at a manageable, sustainable pace. Current projections are to grow production by 60 percent in 2016, while also working on the farm’s green coffee exports to other roasters and importers.

“Long term, once we’ve got him up and running, our goal is to go down there and help other farmers do the same thing,” Peters said of the farm development plans. “And that’s whether it’s in Brazil or wherever we encounter people that are producing quality coffee, but just don’t know how to establish that direct-trade relationship.”

A pourover class at Peixoto Coffee

A crop to cup illustration on the café wall

Julia at the farm

Jeff and Julia on the family farm