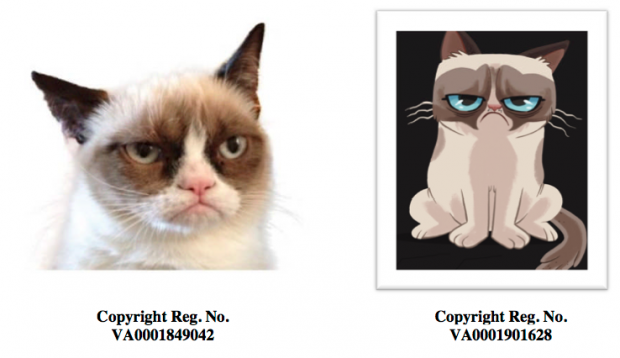 Copyrighted images sited in the lawsuit.

The owners of Tardar Sauce, popularly known through internet celebrity as the curmudgeonly faced Grumpy Cat, are suing the California-based company that recently began selling roasted whole-bean coffee with the Grumpy name and an illustrated image of the cat.

Ironically, while the world-famous feline Grumpy Cat and her valuable brand are most often invoked in a tongue-and-cheek fashion, Defendants’ despicable misconduct here has actually given Grumpy Cat and her owners something to be grumpy about.

The plaintiff acknowledges that Grenade was granted license to use the cat’s name and image for its RTD bottled cold brew coffee line Grumpuccino, which launched in 2013, but claims that the defendants’ newest coffee line and uses involving the grumpycat.com domain name exceed the scope of the licensing agreement and trademark laws.

“Although, as required by the License Agreement, Defendants sought Plaintiff’s approval of use of the Licensed Properties in connection with the proposed roasted coffee ground product, Plaintiff never approved such use,” the complaint states. “Defendants were repeatedly told by Plaintiff (both in writing and verbally) that the Licensed Properties could not be used in connection with a roasted coffee ground product.”

Who cares. The coffee is probably junk. Belongs in a litter box. This is all probably a marketing ploy to get the crap coffee in the headlines to get it to sell.

Reminds me of Frank Zappas wife suing people for playing Zappa Covers. Super classy. I have a hard time seeing the harm if the Coffee Company is redirecting Customers back to the GC online properties but this might just be an attempt to squeeze more money out of a preexisting contract. Being completely honest, “Angry Cat” or “Tired of Life Cat” might have been a cheaper marketing direction.