Baratza Reveals the Sette: One Rotating Ring to Rule Them All 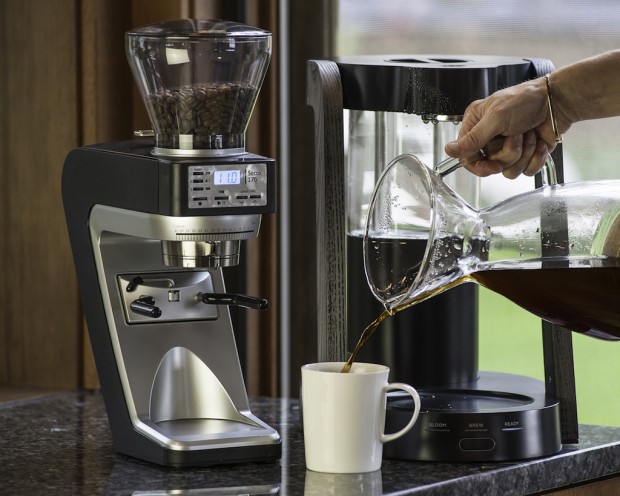 Baratza, the Bellevue, Wash.-based maker of home and commercial grinders, is introducing a new series of machines to its product line that constitutes a dramatic departure from the company’s previous designs.

The fundamental new design, called the Sette — Italian for “seven,” as the grinder is both shaped like a number 7 and is roughly the seventh model released by the company — features an innovative vertical path for coffee to travel directly from the hopper down through the burrs and out to either a bin or portafilter, a system which, according to Baratza, results in near-zero retention.

Equally innovative is a mechanism for actively delivering coffee into and out from the burrs, rather than having beans fall in by the force of gravity. This results in what Baratza states is an impeccable output speed relative to the size of the burrs — 3.5 grams per second of espresso, 5.5 grams per second in brewing range, more than twice as fast as other Baratza grinders — while also diminishing static and retention.

“The grinding mechanism in the Sette is what’s really news,” Baratza Co-Founder and Chief Engineer Kyle Anderson told Daily Coffee News. “It’s a whole new generation, it has nothing in common with our existing family of conical burr grinders.” 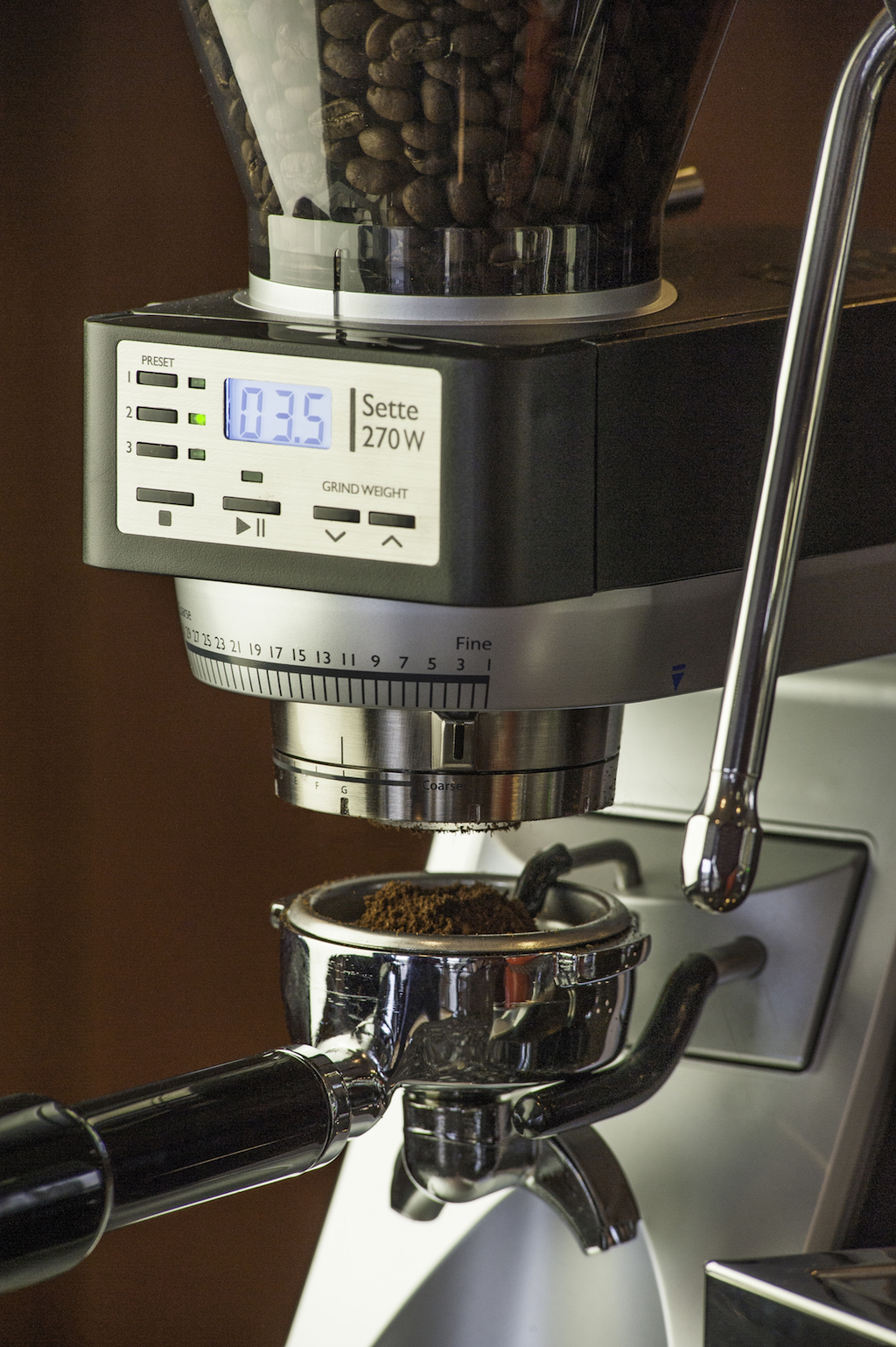 The Sette is still a mere 40-millimeter conical-burr grinder, the basic fact of which would seem to put it in line with Baratza’s Encore, Virtuoso and Preciso grinders, although the similarities end there. The departure begins with what the company calls the Etzinger Mechanism, a novel take on the conical grinding process pioneered by Christian Etzinger, the Austrian aeronautical engineer based in Switzerland that designs and manufactures burrs for Baratza and other grinder-makers in a factory in neighboring Liechtenstein.

To this point, conical burr grinders have always functioned with a stationary outer ring burr and a rotating conical inner burr. The Etzinger Mechanism works oppositely. The inner burr is stationary, and the ring burr spins around it, driven by a proprietary direct gear-drive system Baratza has licensed from another Swiss company and tested for strength and durability. Said Anderson, “You could probably hook a winch up to it and pull trucks up a hill.”

Meanwhile aggressive helical grooves cut into the top of this rotating outer ring burr are what actively pull beans down between the burrs, while another helical compressor ring at the base of the rotating ring burr gathers the resultant grinds and compresses them slightly while guiding them out, which helps dissipate static charge. “You need coffee to bunch up a little bit after it’s been ground,” said Anderson, “or you will have a static nightmare.” 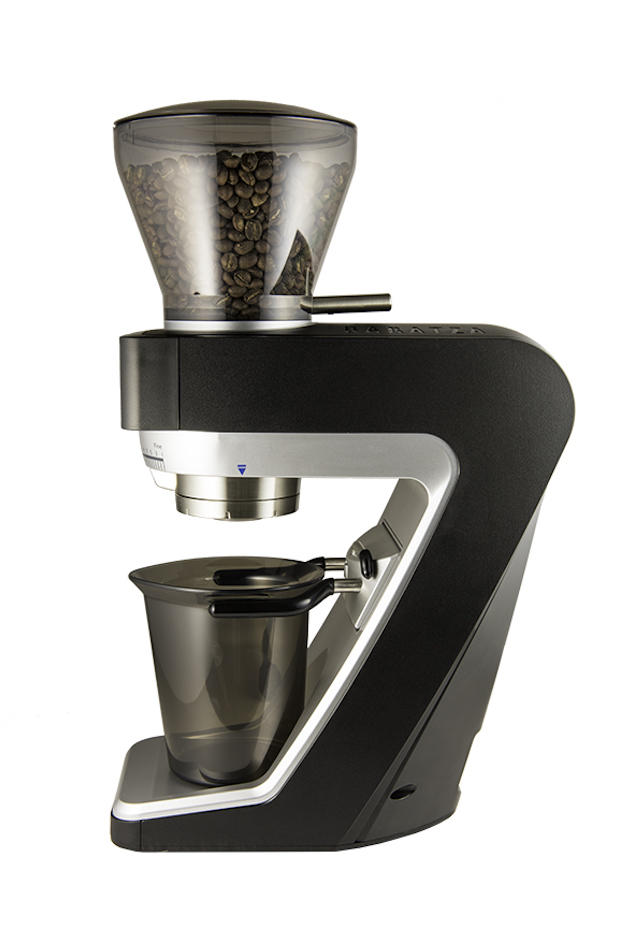 Anderson said Baratza and other grinder manufacturers often compare notes, with static universally regarded as problematic. “We all live with static. It is a freakin’ black magic demon,” Anderson said. “The only thing that everyone agrees on regardless of manufacturer — and I’ve been futzing around with this since 1989, personally — is that you want to provide a very small amount of backpressure after the coffee’s been ground. Otherwise you might as well go get some compressed air and blast that [stuff] all over the room.”

It just so happens that the harnessing of blasts is exactly Eztinger’s forté given his aeronautical background. That becomes particularly evident upon examining the shape of the Sette’s grinding mechanism, which Anderson said is modeled after a jet engine. “The nozzle on it, the way the coffee comes out, it looks like jet exhaust, it’s just crazy,” Anderson said with a laugh, adding, “Christian’s just a few clicks north of brilliant.”

Also featuring a backlit digital display, separate macro and micro adjustment mechanisms, three memory settings for timed grinding and standard inclusion of Baratza’s shut-off hopper that can be removed while still holding beans, the Sette 270 would seem to be chasing the Baratza Vario, while the Sette 270W, with real-time grind-by-weight capability, would seem aimed to unseat the Vario-W. But Baratza’s Vario and Forte models are 54-millimeter flat burr grinders; the Sette is a conical, and an unusual one at that.

Baratza’s conical Encore and Virtuoso models aren’t going anywhere. Sales have shown Anderson that these economical domestic crowd-pleasers deserve their spots in the lineup. The Preciso’s days are numbered, however. With a projected introductory price of $379, the Sette 270 will usurp the $325 Preciso’s throne at the top of Baratza’s conical line. Said Anderson, “At $380, it’s a hell of a lot more grinder than a Preciso.” 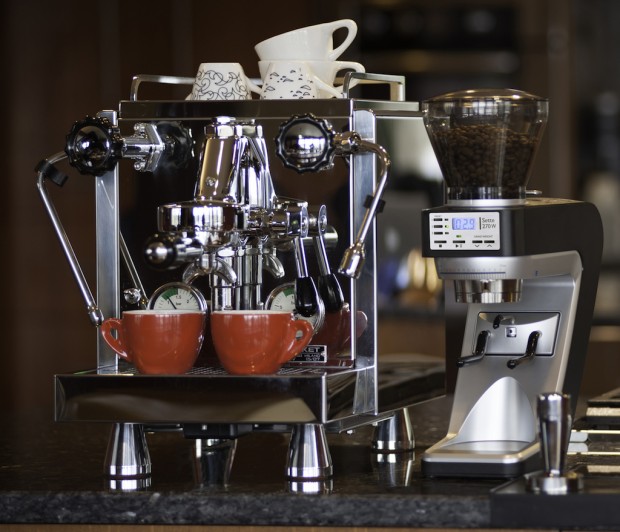 The scale technology built into the grind-by-weight Sette 270W is designed by Acaia, makers of the popular Bluetooth-enabled, app-connected Pearl and Lunar pourover scales. The Sette 270W will therefore also be Bluetooth-enabled, and will have an accompanying smartphone app, which Anderson said will be on display at the Acaia booth at the upcoming SCAA Expo in Atlanta. “Rex and I have been working together on it. He’s a great guy,” Anderson said of his collaboration with Rex Tseng, creator and co-founder of the Acaia scale and company.

The Sette weighs in at 7 pounds and is 15 inches tall, 9.5 inches deep and 5 inches across at its widest, which is a bit deeper but otherwise comparable to all other Baratza grinders. The Sette 270 and the 270W are both launching at the SCAA Event in April 14-17, with a pared-down lower-priced third version called the Sette 30 set to launch in early 2017.

While there are no current designs on the table for a fortified, specifically commercially-spec’ed Forte-style Sette, Anderson does not rule out the possibility. The Forte, too, was not part of an original plan on Baratza’s part, but was brought about by public demand. Said Anderson, “We think our customers are the ones with the best ideas, so we listen to them.”