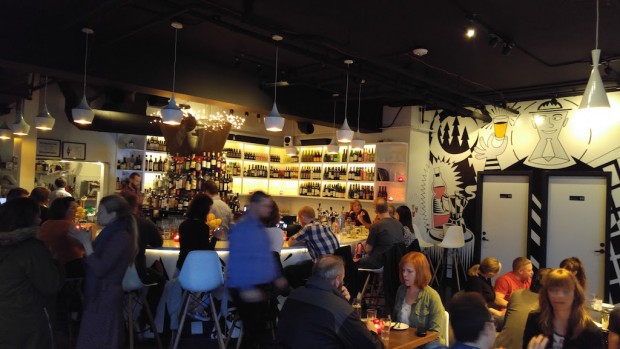 From the coffee brains behind Portland’s burgeoning mini-chain Coco Donuts in partnership with the creators of the Hele Pele tiki bar, comes the recently opened day/night coffee/cocktail respite on East Burnside called Americano.

Defying the Rose City’s de rigueur aesthetic trends of rustic woods and taxidermy or Scandinavian minimalism, Americano’s entire east wall and bar-front boast an Italian Futurist mural treatment, featuring jagged lines in starkly contrasting blacks and whites with bits of color here and there. The mural, by the Portland muralist duo called Rather Severe, deftly and concretely intertwines the spirit of the business with that of its rapidly developing Cascadian home city: tall evergreens, tall mountains, tall buildings; a moka pot, colorful bottles, and a smiling dapper gent.

The smiling dapper fellow at the helm of Americano’s coffee program is Ian Christopher, who is personally roasting the coffees being made into drinks behind both sides of the u-shaped bar. Americano plans on cross-training its staff, teaching experienced baristas how to make cocktails and bartenders how to dial in shots and pour specific milk designs. Coffee gear in the stylish 1,300-square-foot, 50-seat establishment includes a pair of Simonelli Mythos Clima Pro grinders, an EK43, a Fetco XTS batch brewer and a sleek two-group Modbar installation.

The Modbar, while always a fascinating site and particularly befitting the cosmopolitan nightlife vibe, is also a very practical addition in this structural application. As cocktail bars need to be of a certain height particularly where seating is involved, and they wanted to keep the height of the bar continuous all the way around, a big boxy espresso machine on this counter simply wouldn’t work. 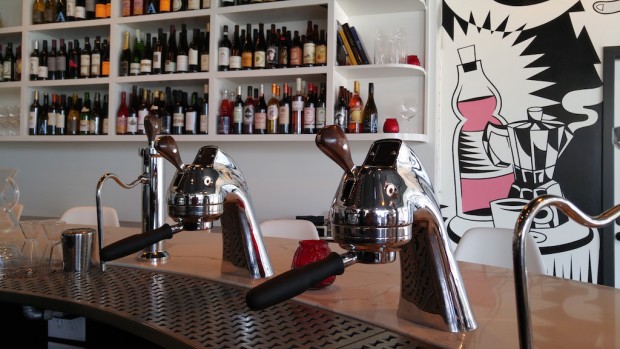 Americano is open for brunch and for dinner, serving creative fare crafted in an onsite kitchen by acclaimed New Orleans chef Chris Debarr. Christopher, who has been roasting for Coco for several years now, looks forward to configuring unique profiles for the coffees to accommodate his cocktail-crafting counterparts’ creativity.  “We made a drink that was quite nice but I was detecting some of the sours,” Christopher told Daily Coffee News of a concoction that incorporated cold brewed coffee. In that instance the flavors fell into alignment with a bit more dilution of the cold brew, but it was an instructive moment that revealed the opportunities for tinkering back at the roastery.

“When you’re crafting your cocktails, and you need a particular profile, let’s figure out what that profile is,” Christopher said. Another cocktail at Americano, called the Hummingbird, consists of Cappelletti Aperitivo, vanilla, seltzer, and a smoked coffee tincture made from medium-roasted coffee that’s been treated in a meat smoker.

While there will be some overlap in the green coffees Christopher sources for his dual operations, special batches will be roasted and reserved for specific purposes, such as a certain profile on a particular origin for cold brew for cocktails, while that same bean roasted differently might find its way into a blend at Coco Donuts, the fourth location of which is also slated for opening before the end of April.

The fare at the new Coco will expand on their explorations of savory-filled pastries alongside their traditional donut varieties. “We all grew up with donuts,” said Christopher, reflecting on his enterprise. “Did I grow up thinking I would ever be a co-owner of a donut shop? Of course not, nobody would. It’s one of those things — what do you want to be when you grow up? A fireman, a doctor… A donut owner?”

And yet the irony is that not only did his Coco Donuts business partner, Prak Khou, a friend since high school, have an uncle that worked in the donut industry for 30 years, but during that same period, Christopher too had an uncle that worked for 30 years up in Seattle for a company that makes donut-making equipment. “Evidently it was meant to be,” said Christopher, adding that in reality, it was Khou’s quest to find a route into the restaurant industry and Christopher’s desire to break into specialty coffee for which the two came together with a feasible plan to accomplish both.

Which is not to say it’s been easy. Christopher sold his house to open their downtown location, while Khou’s family has made sacrifices as well. “And now, after six years, we’re getting ready to open our fourth location on Williams,” said Christopher. “So, slowly but surely, we’re making our way.”