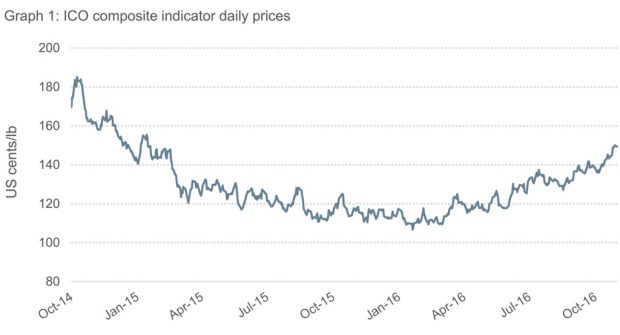 ICO graph showing the daily composite indicator price over the past two years.

The International Coffee Organization has published its monthly report, with the ICO composite indicator ending with a 21-month high average of $1.426 per US pound in October.

Amid a shortfall, robusta prices rose for the eighth straight month, eclipsing $1 per pound for the first time since November of 2014, and representing a 40 percent increase over the robusta average at the beginning of this calendar year.

“The market has been largely driven by the ongoing concerns over Robusta supply, as well as growing speculation over the size of the next 2017/18 Brazilian crop, as Arabica will be going into an off year in its biennial cycle,” the ICO said in its monthly report. “The Brazilian real has also been appreciating against the US dollar, reaching its strongest level for over a year, which has helped to support the market.”

Prices for the three Arabica groups within the ICO composite indicator — Colombian milds, other milds and Brazilian naturals — also each rose on average in October, from between 1.5 to 2.2 percent.

This month’s report also includes data on averages for exports for the ending of the coffee year 2015/16, with total exports down 0.7 percent to 111.8 million bags. Said the ICO, “This is the second consecutive year in which exports have declined, following the record volumes set in each of the four previous years.”

Click here for all the numbers, charts and further explication from the ICO.