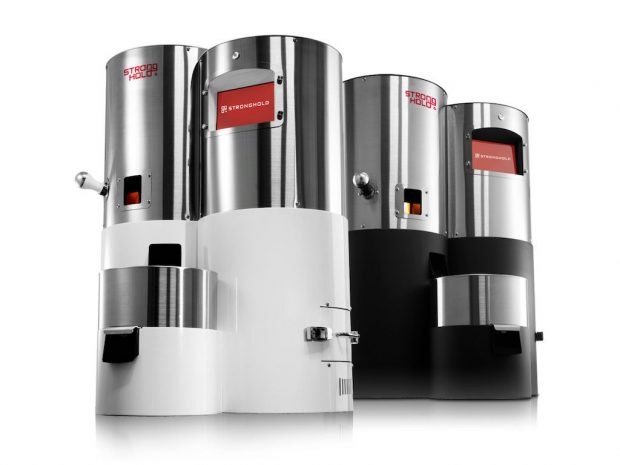 Representatives of the company told Daily Coffee News that the 850-gram-capacity (just shy of 2-pound) S7 model is already in use in more than 500 locations in Korea, with the majority those being production units within cafés. Stronghold has served as a sponsor of the World Coffee Roasting Championships in each of the past two years, providing S7s as sample roasters.

The S7, along with its higher-capacity (8-kilo) counterpart in the Stronghold range, the S9, represent a functional departure from any commercial roasters currently on the market, while their exterior appearance more closely resembles a batch brew tower setup than any kind of roasting device.

The electric-powered roasters feature a stirring impeller inside a vertical tower drum, with heat coming in three different forms — convection heat circulating throughout the drum, conduction heat made even by the interior impeller, and radiation heat from a halogen lamp that the company says can provide a more even roast than found in other air-based machines.

In addition to the mechanical innovations, Stronghold’s research and development has centered around the software and user interface accompanying the machines. With the electric elements, fixed exhaust, thick roaster walls and ceramic components contributing to maximum heat control, a big pitch for the company is roast speed and repeatability. A responsive touch screen allows for manual manipulation of each of the available variables, and naturally roasts can be saved and repeated for maximum consistency.

The Japanese investment firm Softbank has made multiple investments in Stronghold since the company officially rolled out the S7 in the domestic market in 2013. The company has not yet provided official word on when or by whom the S7 may be distributed to the U.S., but a company spokesman confirmed that it is likely to be in the early part of 2017.