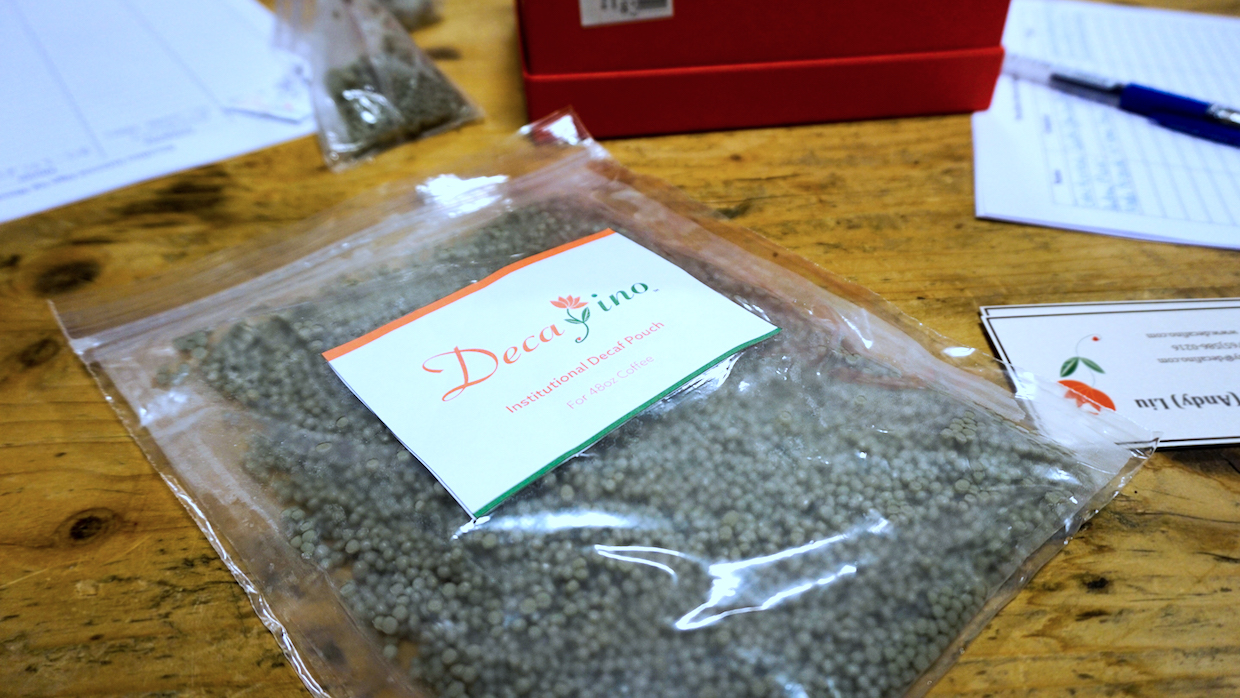 Decaf Pouch contains a proprietary combination of natural polymers and minerals used to remove caffeine from coffee after it’s been brewed. All images courtesy of Decafino

There’s a new in-cup technology on its way to market that could potentially upend the existing decaf paradigm by eliminating the need for the decaffeination of green coffee prior to roasting, or even prior to brewing.

The Decaf Pouch, a product currently being developed by Seattle-based start-up Decafino, is a teabag-like item that reportedly decaffeinates a given volume of coffee by remaining submerged and stirred in the brew for a matter of minutes.

One of the most important messages that the specialty coffee decaffeination industry has struggled to reinforce in the minds of both consumers and professionals is that decaf and regular coffee can be the same coffee as long as the green bean is physically amenable to the process, and most are. There’s also no reason at all that decaf would taste any different than regular. Therefore coffee companies shouldn’t relegate a lower quality bean to decaf, nor should consumers expect any less of decaf when it comes to the experience in the cup.

Ultimately, the question of decaf quality boils down to the whim of the roaster. If the Decaf Pouch is as simple and effective as its makers claim, the innovation could alleviate the question entirely, by alleviating the need for a separate category in the first place. Any single cup or batch could become decaf on demand, and the wish of the consumer.

The product began in late 2015 when Andy Liu, then a University of Washington graduate student, decided at first to pursue as his Master Capstone project a way of increasing the level of caffeine in beverages, ironically. His team quickly realized there was no call for such a product on the market, and then set about achieving the opposite: A way of decaffeinating coffee after it’s been brewed. 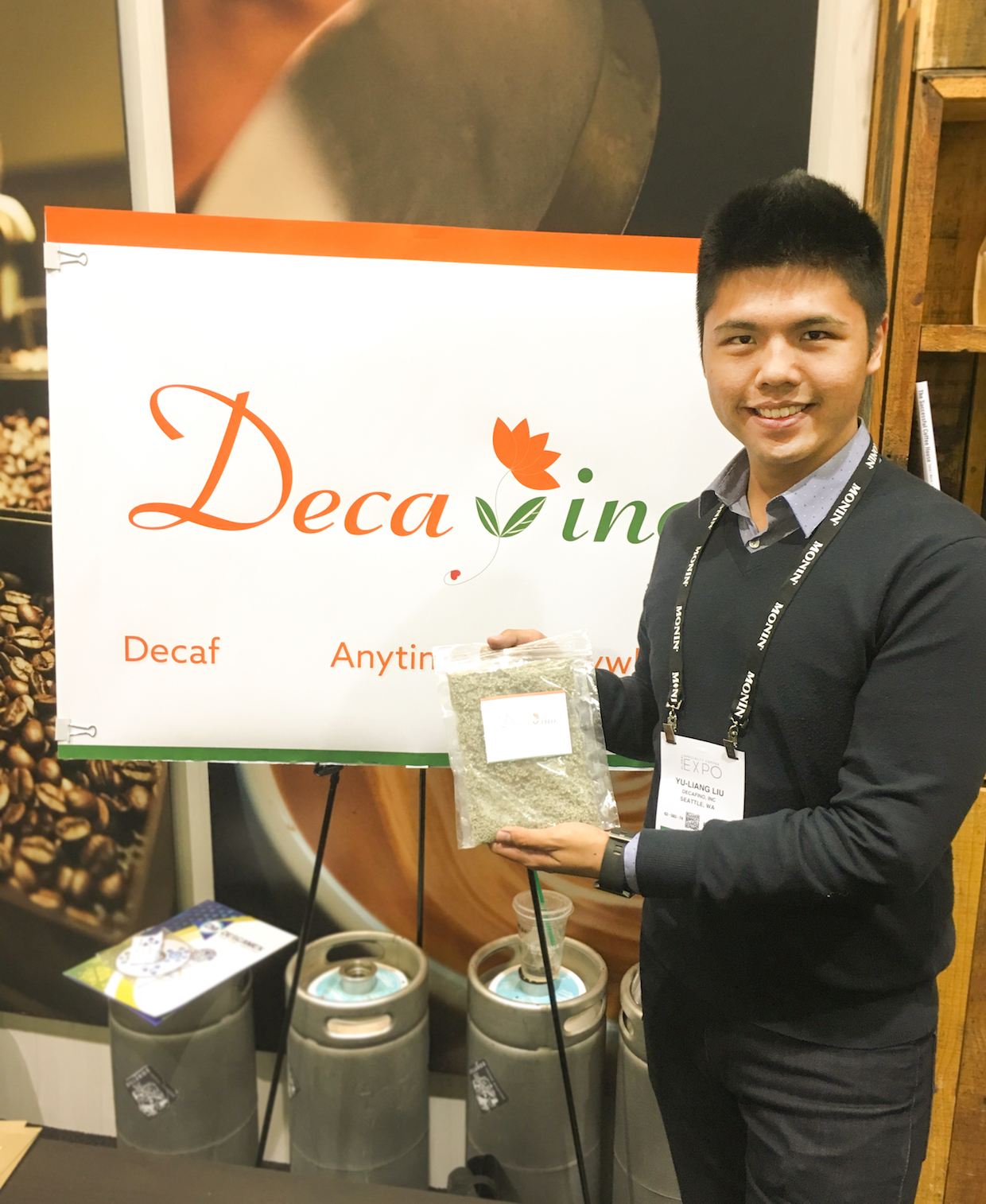 The resulting Decaf Pouch is a food-safe teabag-like product that contains a proprietary combination of natural polymers and natural minerals, all designated by the FDA as GRAS (Generally Recognized As Safe). Liu told Daily Coffee News that there’s no danger if a pouch somehow opened and a drinker ingested its contents by accident, and that while current decaffeination methods require either a large consumption of energy or use of volatile chemicals or both, the Decaf Pouch does not.

“Decafino technology is very flexible. Since it is a physical caffeine removal process, it will not create any chemical byproduct, and works perfectly with beverages at any temperature,” said Liu. “We have tested in tea and soda and received positive results. Theoretically, our technology works with any caffeinated beverage, so it should work with espresso, latte, cold brew, and any other kind of coffee. But we would like to perform additional testing before any definitive pronouncement.”

The Decafino company was started with an initial funding of $22,500. Through its speedy development progress and positive feedback from professionals such as the staff of Fulcrum Coffee in Seattle that have tested the product, they have since secured an undisclosed amount of additional funding. Said Liu, “We will continue to bootstrap our startup so as not to dilute the owners’ equity prematurely.” 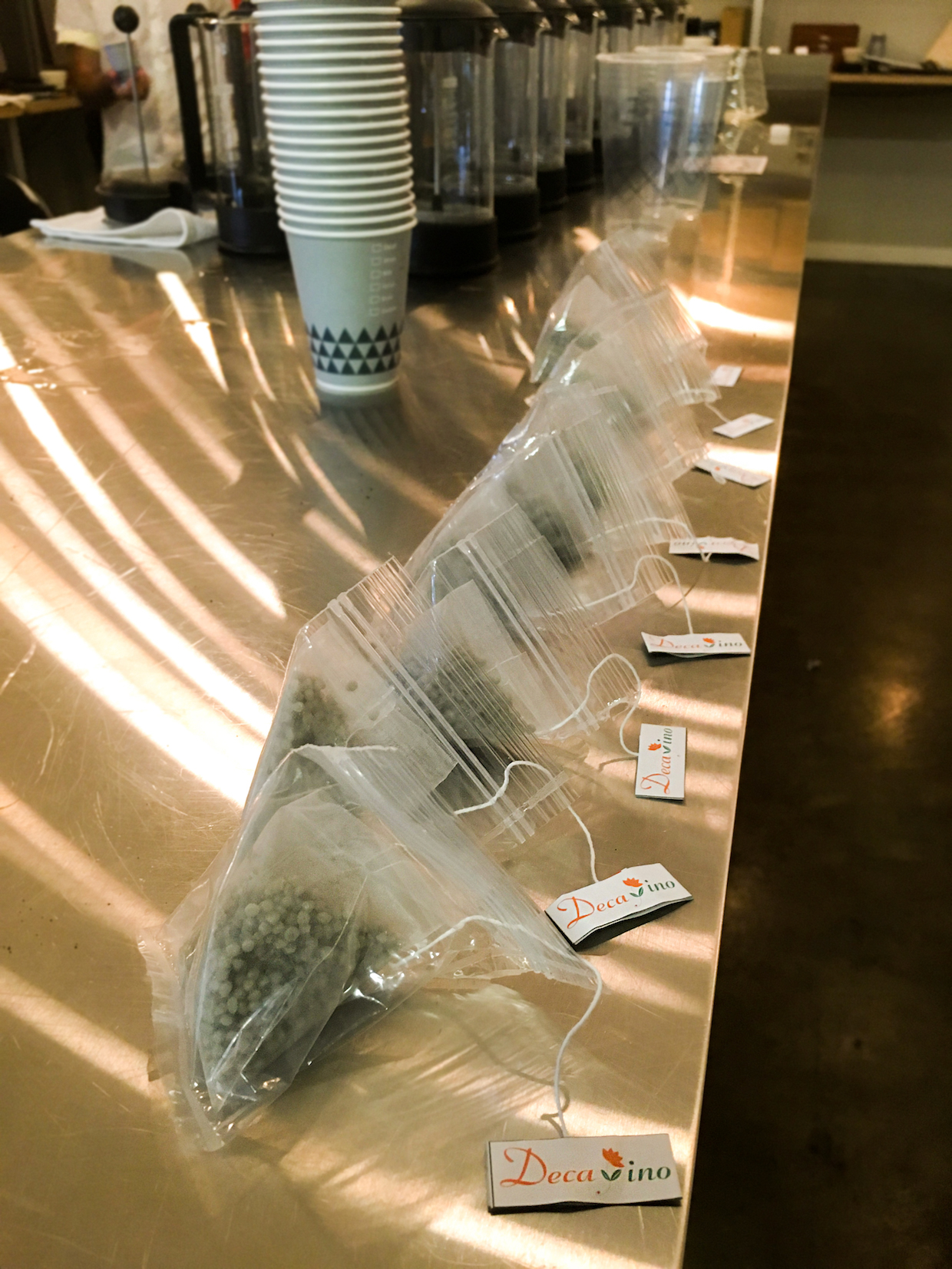 The company stated that while it’s also premature to discuss specific retail price projections, they do aim for a low per-pouch price.

“Since we want the Decaf Pouch to have wide-ranging consumer adoption, we will work hard to keep the per-serving cost less than one dollar at the retail level,” Liu said. “For the Institutional Decaf Pouch, since the pouch is larger and less packaging required, the per serving price will be significantly lower.”

Liu reported that manufacturing and packaging of a commercial-use product is currently underway. The Institutional Decaf Pouch is expected to launch by the end of this year, while an “Individual Decaf Pouch” for consumers is projected to arrive within the latter half of 2018.